"Ben Carson is like the drug free cocaine for people who don't want to get high but like snorting white powder." 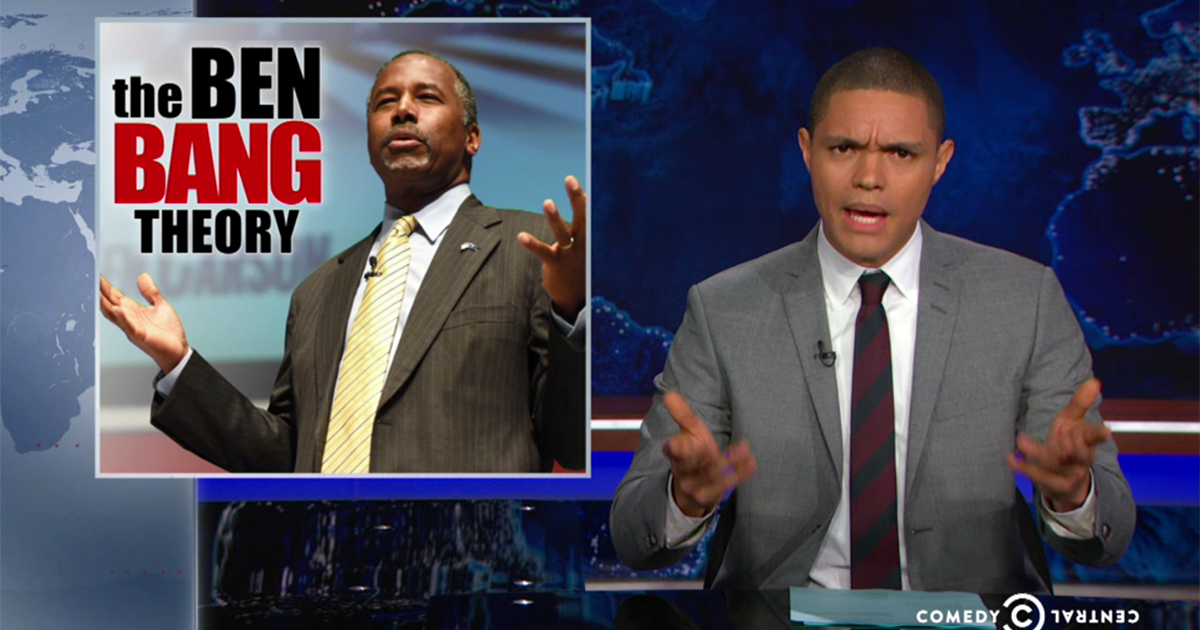 Ben Carson is having quite a week what with Rupert Murdoch saying he'd be a better black president than President Obama and being caught not knowing what the debt ceiling is. Trevor Noah took on the good doc on The Daily Show Wednesday evening saying he's like Donald Trump's ideas for people who hate Trump's charismatic personality.

Noah poked fun at Carson's recent statements that he'd rally people to attack a mass shooter. To better illustrate the point Noah did a stellar Carson impression complete with raised chin, half opened eyes and floating arms. He pointed out Carson's consistent problem with awkwardly laughing at incredibly ineapproprate times. Talking about people being attacked by a mass shooter isn't funny, whether Carson thinks it is or not.

"How can you stand this guy," Noah said. "Chastising victims of a shooting for what you assume was their cowardice is what most normal candidates would consider a gaff.  But I will admit, Ben Carson does practice what he preaches, because even though the media kept taking shots at him, he kept charging into those interviews."

Noah rolled the footage of Carson on The View where he talked about kindergarten teachers being trained in weaponry and hand to hand combat. "Kindergarten teachers can barely handle a room full of five year-olds and now you want them to be Navy Seals?!"

Then the now famous Facebook post. Imagine the insensitivity of your doctor saying that to you! "It's just shocking that a smart man, that a brain surgeon could have this kind of perspective," Noah said. The only time this kind of "rushing the gunman" has ever worked is when someone is being attacked by zombies.

Senior Campaign Correspondent Desi Lydic on the ground in Oregon appeared to talk about Carson's brilliant strategy of rushing the gunman. "Fantasy? Ben Carson is the only realist in this conversation," she said. "Look, he knows gun control is off the table. And since we can't control the guns, we can at least control the victims reactions to the guns. We've all heard the saying: guns don't kill people. People shot by guns who don't rush the guy shooting them, kill people."

It's so refreshing to see we've moved away from the right wing's "mental health" argument and instead moved on to blaming the victims. Women who've been assaulted have been dealing with that for years. Nice to hear we're applying it across the board now.

Check out the videos below for more: