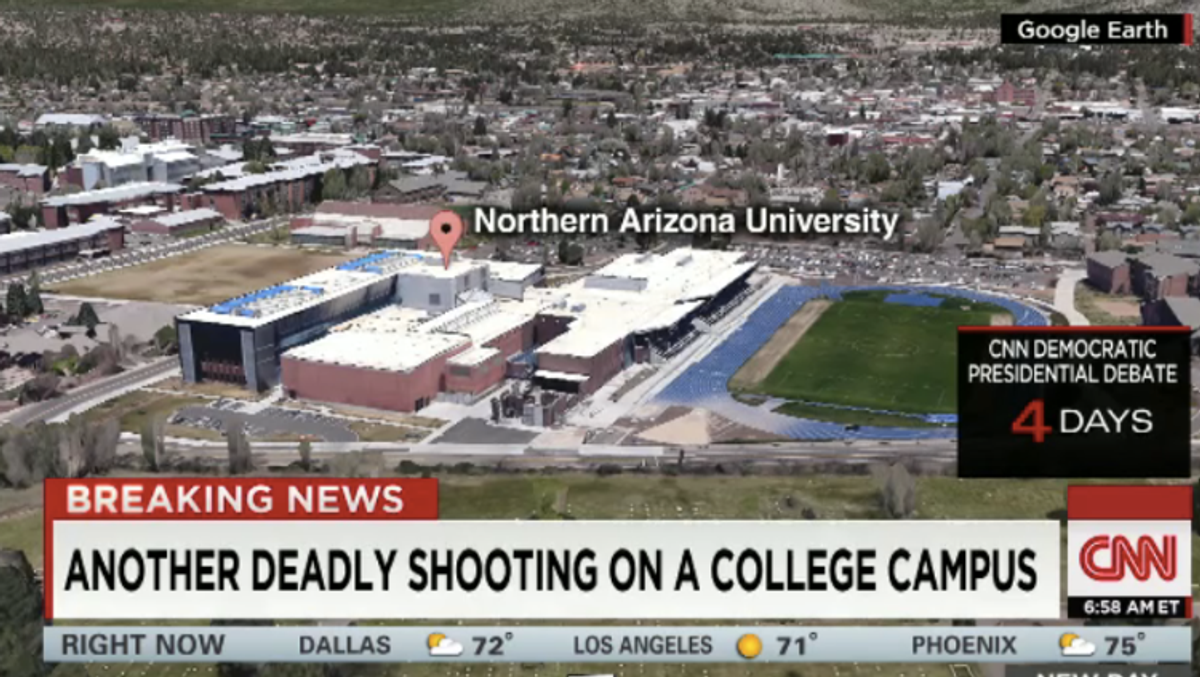 FLAGSTAFF, Ariz. (AP) — An overnight confrontation between two groups of students escalated into gunfire Friday when a freshman at Northern Arizona University killed one person and wounded three others, authorities said Friday.

University police chief Gregory T. Fowler identified the shooter as 18-year-old Steven Jones and said he used a handgun in the shootings at about 1:20 a.m. Friday.

"This is not going to be a normal day at NAU," said school President Rita Cheng. "Our hearts are heavy."

She called it an "isolated and unprecedented incident" and said classes would go on as scheduled Friday.

Iowa City, Iowa-based Delta Chi Fraternity said Delta Chi members were involved, but Executive Director Justin Sherman said in the statement that the organization doesn't have detailed information about the identity of the victims.

Sherman said it was an isolated incident and not fraternity related.

Student Maria Gonzalez told The Associated Press that she at first suspected firecrackers.

"I was studying for an exam so I looked out the window and see two people running, and that's when I realized they weren't fireworks they were actually gunshots," she said.

The parking lot where the shooting happened is just outside Mountain View Hall dormitory on the Flagstaff campus, said school spokeswoman Cindy Brown.

The dorm is home to many of the campus' sororities and fraternities, according to the school's website.

Brown said the wounded were taken to Flagstaff Medical Center, which said it couldn't release any information on conditions.

Arizona political leaders voiced support for the university and surrounding community, with Gov. Doug Ducey calling the shooting heartbreaking. He said the state stands ready to help in the investigation and response.

Congresswoman Ann Kirkpatrick, who lives in Flagstaff, said her heart was hurting, but expressed confidence that the city "will only grow stronger in difficult moments like these."

Both university and Flagstaff police are investigating.

The Flagstaff shooting comes on the same day that President Barack Obama is scheduled to visit Roseburg, Oregon, where eight students and a teacher were shot and killed last week at Umpqua Community College. The gunman in the Oregon shooting wounded nine others before turning the gun on himself.

NAU is a four-year public university that has more than 25,000 total undergraduate students at the campus in Flagstaff, a city about three hours north of Phoenix that is surrounded by mountains and ponderosa pines.