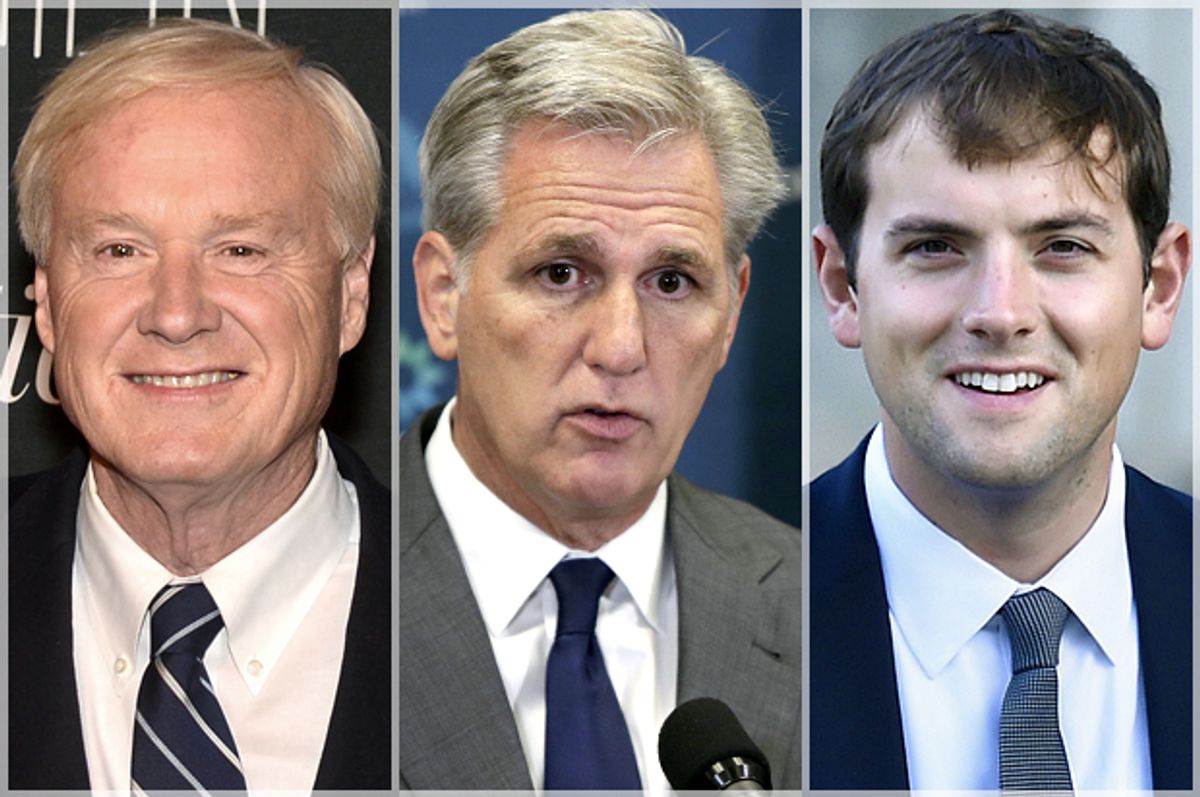 Surfing through the cable news channels yesterday morning, it was clear that the beltway wags were preparing to spend the day indicting Hillary Clinton for buckling under pressure to left-wing fanatics who have taken over the Democratic Party and forced her to take a position against the Trans-Pacific Partnership trade deal against her will. The word had gone forth from NBC's First Read that Hillary Clinton had obviously flip-flopped from her true beliefs on the issue in the most flagrantly dishonest way possible and had therefore cemented "every negative stereotype about her."

During MSNBC's" Andrea Mitchell Reports," they even called in Chris Matthews to analyze the fallout from this terrible decision and the talking heads agreed this showed the left was driving the train. With a socialist gunning for the presidency (a socialist who won't even agree to join the Democratic Party!), unions calling the shots on trade and tree-huggers bringing the hammer down on the environment, the Democrats were in the same predicament as the right with Hillary Clinton being forced, in Matthews' words, to "bow to the extreme." And so a new Beltway meme was born.

Or rather, it was stillborn, since within minutes of Mitchell and Matthews declaring that the Democratic Party's hippies were driving the party straight over the cliff with all their unreasonable demands, the news broke that the presumptive Speaker of the House, Majority Leader Kevin McCarthy, had dropped his news that he was withdrawing from the race. What followed was the kind of chaos you normally only see during a natural disaster or a bomb scare, with sweaty reporters shoving microphones into the face of every person who looked like he or she might be a Republican and anchors back in the studios shaking their heads in disbelief. How on earth could this have happened?

Of course, it was entirely predictable. After all, John Boehner had been forced to resign because he simply could not get his fractious caucus to work together to do the business Congress is tasked with doing. And John Boehner was a 25-year congressional veteran who understood how to work every lever to get that job done. It remains a mystery why anyone thought that Kevin McCarthy -- a man who had only been in Congress since 2007 and whose rhetorical skills made George W. Bush sound like Martin Luther King Jr. by comparison -- would fare better than Boehner. MSNBC's Luke Russert seemed to think that he would be more successful because had gone to some lengths to "stay in touch" with all the members by texting them frequently, but that was about it.

McCarthy's epic gaffe, admitting that the Select Committee on Benghazi is a partisan sham, was likely the most important reason for his fall from grace and subsequent inability to put together enough votes to win. And there were rumors circulating about a personal scandal. But by all accounts it was the anti-establishment Freedom Caucus yanking McCarthy's chain so hard with demands for greater say in policy and process that made him realize he couldn't win the vote. Evidently, his assurances that he would not be John Boehner were simply not enough to assuage their concerns. (All that texting seems not to have done the trick after all.) Indeed, one wonders why everyone assumed they would fall in line -- after all, they never had when he was the party whip.

Robert Costa at the Washington Post reported that the far right leveled some specific demands that McCarthy simply couldn't meet:

Rep. Tim Huelskamp (R-Kan.), the leader of the House Tea Party Caucus, asked McCarthy to publicly oppose efforts by establishment groups — the U.S. Chamber of Commerce and others — to run radio and TV ads criticizing conservatives who defied their own leaders.

In other words, they wanted the Speaker of the House to take their side in disputes with ... himself. Once he understood the impossibility of his position, McCarthy wisely withdrew.

The media were completely shocked -- as they are every single time the House GOP caucus behaves like the radicals they are. It's not as if this is the first time, after all. But they had convinced themselves that it made sense that the amateurish Kevin McCarthy could transcend the troubles that plagued the much more experienced John Boehner. Despite years of evidence, they simply cannot accept that the Republican caucus is completely ungovernable so they, and the GOP establishment, turned their hopeful eyes to yet another savior: Paul Ryan, who, just as Kevin McCarthy had been days before, was seen as a man uniquely capable of bringing the feuding factions together.

And once again the reaction was swift:

Luke Russert noted the tweets and said on MSNBC:

To demonstrate just how difficult it is in the House GOP conference Laura Ingraham, noted conservative commentator, said, "no, he's a young gun" we should do three young guns and you're out," talking about Eric Cantor, Paul Ryan and Kevin McCarthy.

So if someone like Laura Ingraham who has a huge following it the conservative blogosphere and on radio airwaves, if she's opposed to it, it will have a lot of influence on House conservatives who will look skeptically on Paul Ryan.

It sounded as though Russert, being so badly burned by his blithe assumptions about McCarthy, was finally developing some healthy skepticism about the GOP's ability to govern. But then he added, "That being said, he's trusted by a lot of conservatives because he's gone after a lot of the president's programs."

Moreover is it reasonable to blithely assume that this is someone these people will trust?

Ryan’s fellow House Republicans have largely put the kibosh on moving forward with immigration reform this year, but some key GOP lawmakers are still lobbying their colleagues publicly and privately to tackle immigration. The 2012 Republican vice presidential nominee is among figures who have urged the GOP to embrace an overhaul.

“To me, it’s not a question of ‘if’ we fix our broken immigration laws,” Ryan said Wednesday at a breakfast hosted by the United States Hispanic Chamber of Commerce. “It’s really a question of ‘when.’”

Ryan called the nation’s immigration laws “chief” among the problems that are curbing economic growth. Noting the rate of retirement among baby boomers, Ryan said reforming the immigration system is necessary to fill future jobs.

“Please know that we understand the value of immigration,” Ryan told the crowd. “We know its importance; we know its roots, its history here in America; and we have ideas on how to make this go forward and make it work so that we do have the rule of law, so that we do have reform, so that we’re not in the same position 15 years down the road.”

And yet MSNBC's Joe Scarborough said that Ryan is perfect because he can "cut deals," as if cutting deals isn't exactly what these people hate about "the establishment." Benghazi committee chairman Trey Gowdy sees him as a religious figure:

Asked if anyone could unite the conference, Gowdy was unequivocal that Ryan was the man for the job. “Either him or the fellow who just spoke to us,” he said, “but he went back to Italy.”

Maybe they're correct and Paul Ryan is The One they've all been waiting for, the man who can bind up the party's wounds and make it whole again. But you'd think they'd be just a tiny bit chagrined by their assumption that these anti-establishment rebels are going to fall in line simply because Paul Ryan is Paul Ryan. Say what you will, but they seem pretty serious about their agenda.

Nobody knows at this point if Ryan will agree to be drafted. He's consistently said no up until now but is reportedly mulling it over. It's hard to imagine why he would take the job. Unlike the media and the political establishment, he probably recognizes that he isn't a magician or a miracle worker. And perhaps the Freedom Caucus has decided they've made their point and they'll acquiesce to Ryan and agree to obstruct another day. But the underlying dynamics that led to yesterday's circus haven't disappeared.

At some point, the Beltway media is going to have to grapple with the fact that the Republican Party is no longer functional and that this is not a dynamic that's mirrored on the other side. There is simply no comparison between Hillary Clinton responding to the voters and her rivals on specific issues as she runs for president and this lunacy that's taking place in the Republican party. What she's doing is called "politics." What they are doing is ... something else.

But they haven't grappled with it yet. Chris Matthews summarized the events to Brian Williams this way:

I think the headline for the day is "the center cannot hold" to quote Yeats.The center isn't holding in American politics today. The center right isn't holding. We'll see if the center left and Hillary Clinton will hold as well. It seems the poles are winning, the poles of right and left are winning the arguments, getting the press. The fact that Trump is on the television set every night, free media, that he is the best show in town, is really a reflection that the house of representatives, particularly has dropped the ball... The center didn't hold today and the forces of the right and the left are starting to look interesting and that's a problem.

Perhaps the most poignant comment of the day came from Norman Ornstein, an establishment figure who, along with Thomas Mann, wrote the book about the right's extremism and was shunned by the political media: