Bob Dylan, bizarre computer salesman: "He’s being played as a genial grandpa, rather than as a rebel" 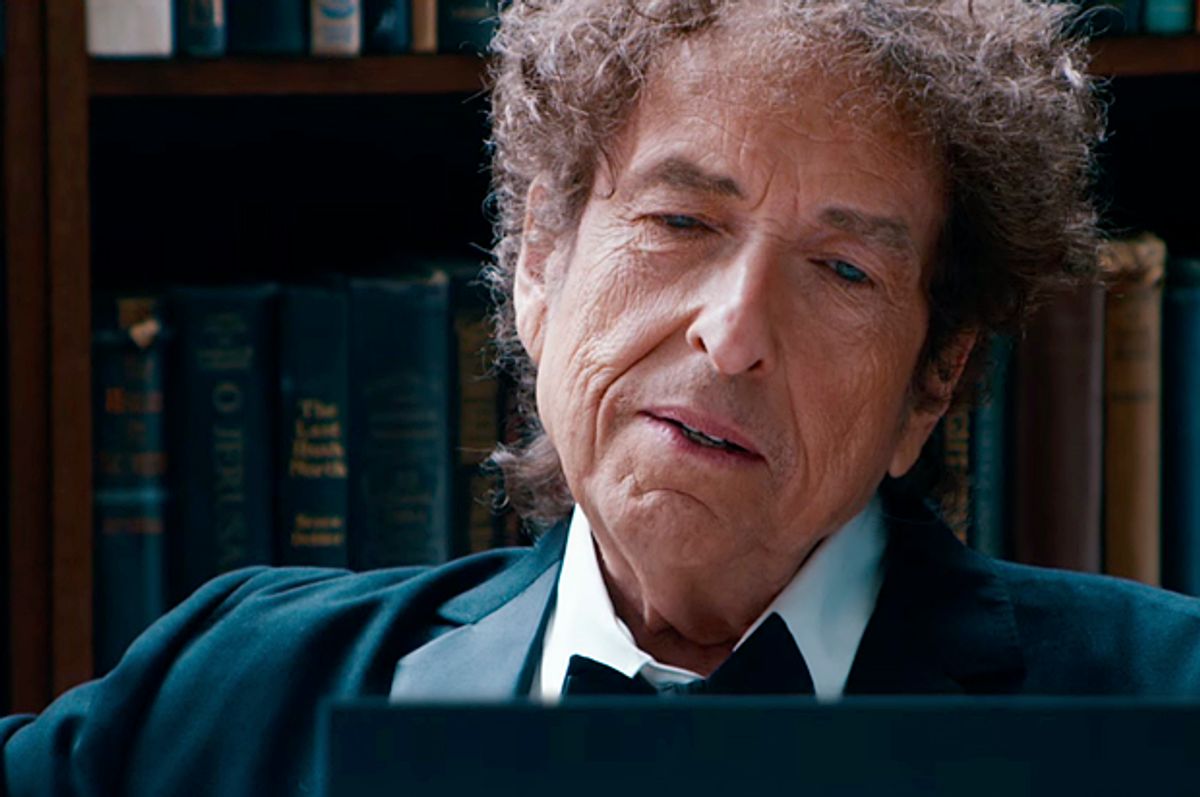 The once reclusive, still-baffling Bob Dylan has shown up on a commercial for IBM’s Watson. Dylan has made commercials in the past, but this is the one is strange for all kinds of reasons; AdWeek has called it “Advertising’s Oddest Pairing.” In the course of it, Dylan speaks to an artificial intelligence system about his work, jokes about writing a song together, and strolls offscreen the same way he arrived, Telecaster in hand.

There was a time when rock musicians kept a distance from commercialism even while selling their work through record companies. More recently, with sales of recorded music plummeting, many musicians have come to depend on licensing for television, movies, commercials, product placement and the rest. Does the Dylan bit tell us anything about the relationship between rock music and commerce?

We spoke to Ira Robbins, the longtime New York-based rock critic who edited the punk-affiliated Trouser Press magazine and its guides to New Wave and alternative rock. The interview has been lightly edited for clarity.

This isn’t the first commercial Dylan has made, but it’s struck some people as dissonant or odd. What did it seem like to you? Is it just another chapter of Dylan’s strange engagement with commerce?

Dylan in his old age has been more unpredictable than he was as Dylan the young firebrand he was in my youth. Seeing him pop up in surprising places is almost commonplace. He hasn’t made an obnoxious habit of it, but he’s done enough on commercials and movies and other things you once would have thought of him disinclined toward, but no longer.

Given his extremely awkward and un-actor-like performances in the films he’s started in, he’s actually really good in this: He seems really natural.

Is it fair to say that the tension between rock ‘n’ roll and television commercials – outright commercialism in general – is over? Is that an old hangup, one that started to fray when Dylan went electric at the 1965 Newport Folk Festival? Is there any antagonism left between rock music and commercialism?

I would agree with everything you just said, except I wouldn’t connect it to Newport particularly. I don’t think that was a commercial moment; I think that was an artistic moment.

But absolutely – there is nobody left alive except people of my generation and older who even find anything to question about the notion of commercialism and rock being completely overlapped. It isn’t that people have changed their opinion about it, it’s that the idea that there’s something to question in that has completely evaporated. We’ve lost that battle; we’ve stopped fighting it.

It makes you wonder: Dylan has sold lots of records over the years, he’s been on this endless tour… Is it conceivable that he needs the money so badly that he has to do a TV commercial? Or does this strike you as something he might have done for fun?

Ah – neither. I’ve given some thought to this, because it comes up with all these aging rock icons. Why do they continue to do what they do? Like the Rolling Stones – it just can’t be that the Rolling Stones need money, after doing what, five or 10 tours over the last 20 years, each of which has netted each member of the band several million dollars. Not to mention the fact that they clearly have other revenue streams.

Does Dylan need the money? I seriously doubt it. But starting back with Fred Goodman’s book "Mansion on the Hill," the notion that Dylan had a serious interest in accumulating wealth became pretty apparent – something that had never occurred to me as a fan before… That he likes being rich, that he will go out of his way to be paid for things. That was sort of a surprise to me. But I integrated that into my understanding of things and am no longer surprised that he does things solely for money.

You and I don’t know; for all all we know, he could have a deal with Sara [Dylan’s first wife] where he pays her $10 million a year, who knows?

So I think the idea that Dylan wants money is now a given. Did he do it for fun? I’m pretty sure he didn’t do it for fun. They obviously made it fun for him; it’s a cute little commercial. And presumably there’s more to come; I can’t imagine that’s the extent of their relationship. But I certainly understand that Dylan is an industry and he likes adding to his coffers.

I guess the other thing that will be dissonant for some people is that Dylan – a figure we still associate with the ‘60s – engaging with digital technology. Dylan has done a commercial for Victoria’s Secret, and for Chrysler. But this is a kind of technology that didn’t exist for most of Dylan’s career. I understand why IBM would want some of Dylan’s rebel cool, but it seems like a funny choice for him.

You raise an interesting question – what’s in it for either side? I’m not sure Dylan carries any rebel cool in 2015. He’s an elderly man crooning sophisticated Tin Pan Alley standards for an audience that’s older than AARP age… If you want rebel cool, you get Jack White. You get someone 30 or 40 years younger who has done something rebellious in the last couple of decades.

I think from IBM’s side, they’re getting a venerable institution with instant recognition among a base of viewers who probably have money. Dylan is not attracting young fans anymore, but young fans are not what you are trying to attract for whatever Watson is selling. You’re trying to through to people who control multi-million dollar budgets, as opposed to people who have $2,000 to spend on a laptop.

From Dylan’s point of view, I don’t think it matters who he’s doing it for. And his role in the commercial is sort of as the bemused observer of technology. He’s talking to a machine that tells him it knows how to sing... I think he’s being played as a genial grandpa, rather than as a rebel of any sort.

The computer tells Dylan that the key themes of his songs are “time passes and love fades.” Is that a pretty fair description of his body of work?

I’m not sure I need a TV commercial to help me understand someone whose music I’ve been deeply affected by since I was 11-years old. Now that you say it again, I’m not sure – is that what Dylan’s songs are about? Time passing and love fades? No, I wouldn’t say that at all. Certainly as Dylan’s gotten older, he’s gotten more nostalgic and reflective – the more half dozen albums are an old guy thinking back on his life. What 70-year-old musician is going to write about what’s going on in the streets today or how they’re looking forward to 2017? If that’s an accurate observation, it’s entirely a facile and simplistic one.

It doesn’t describe the early protest records, or "Highway 61 Revisited"…

...Or even “Desire,” or “Slow Train Coming,” which was about faith. I would venture that faith would have to be included as a watchword of Dylan’s music in a number of different iterations… If you’re putting together an ad campaign, faith is not really a word you want to come up, for an audience that may have different ideas of what it means.

Of the major rock artists, Dylan stands out: He tours all the time, and has done a few commercials, but he’s remained reclusive in some ways. Just how press shy is he? We don’t see him in interviews and magazine covers as often as a lot of other major stars.

That’s true. But I think “Chronicles” was the Rubicon for him. I read “Chronicles, Vol. 1” and thought, “Oh my God, he’s actually done things I didn’t know about and he’s willing to talk about them!” Whether that book is a 100 percent accurate reflection of his life or a highly selective one, it was amazing… I kept thinking, The Buddha Speaks. It was like seeing a statue come to life.

Ever since then, he’s been, in his own enigmatic, self-amused way, he’s been sharing bits and pieces of himself. He did the film with Scorsese, and more interviews.

In the ‘70s there was just no getting to him. No way… Even in the ‘60s, when he was visible and voluble, there was no way of making use of anything he said – it was all whimsical or contradictory or complicated or just paradoxical.

He doesn’t seen as self-protective as he used to be. At the same time, he’s not out there doing the promos the way Mick Jagger would if he had a new project.

The funny thing about the commercial to me was how much it seemed like “2001” and Hal. The computer voice was just human enough to not seem mechanical, but mechanical enough to not seem human. I kept waiting for it to say, “Gee, Bob, I can’t really help you with that.”