Inside the hostile deals, network panic and last-minute scrambles that made history on October 11, 1975 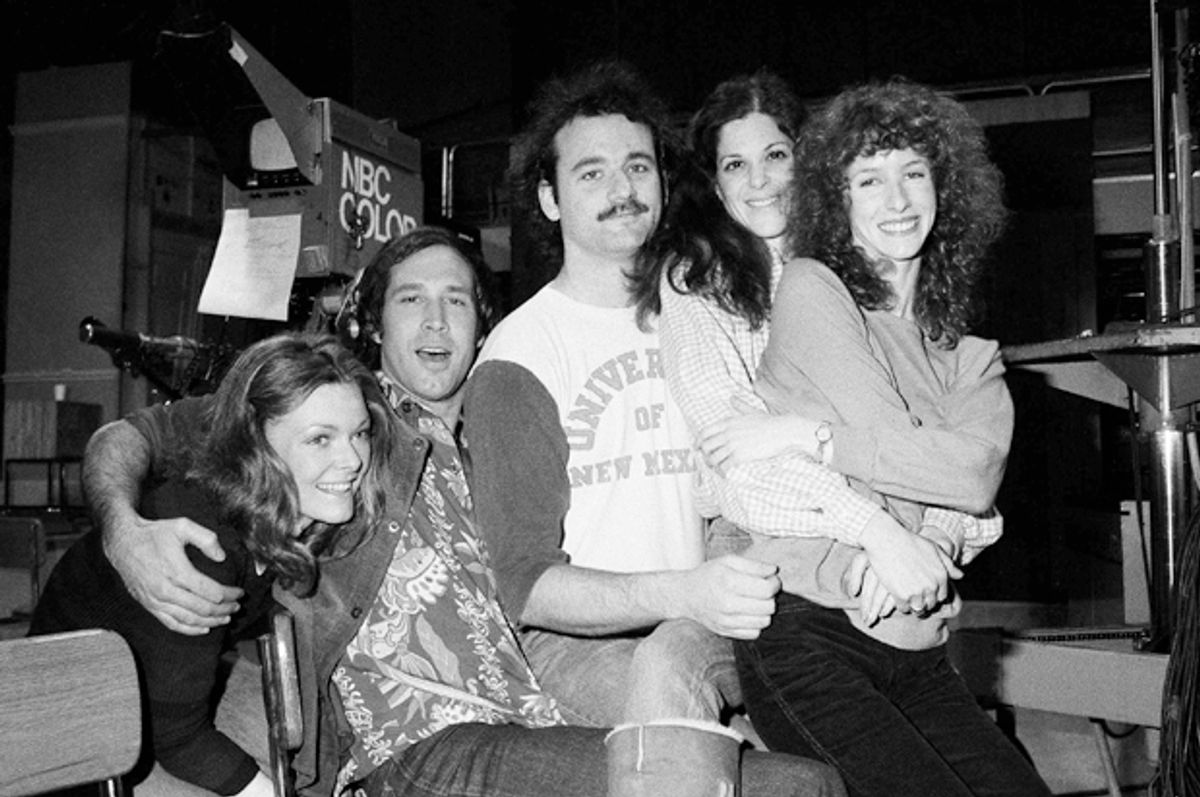 "Saturday Night Live" celebrated its 40th anniversary last February with an avalanche of stars parading through a three-hour prime-time special. Overlooked in all the excitement was the fact that the show’s actual 40th anniversary wouldn’t arrive until eight months later — until this Sunday, to be exact.

"SNL" premiered on Oct. 11, 1975 (it was actually named "NBC’s Saturday Night" at the time) and it’s startling to compare the shaky, unformed show that almost nobody saw that night to the high-wattage, high-rated season opener we saw last week.

We devote a chapter to the first show in our book, "Saturday Night: A Backstage History of Saturday Night Live." Here are a few details that illuminate the remarkable distance the show has traveled over the course of those 40 years.

It’s odd how many people, including not a few guest hosts, never seem to grasp that "Saturday Night Live" really is, as its name plainly suggests, a live show, a fact that makes it one of the most ambitious, complicated and dangerous programs ever produced. By now SNL has a production schedule that can be described as routine chaos, meaning that, despite a determination to keep things loose and flexible, there are seasoned professionals at the helm who can be relied on to get 90 minutes of comedy on and off the air.

Such was not the case going into the premiere. To the contrary, there was no confidence that the first show would come off at all. "SNL" Fearless Leader Lorne Michaels, who was a master at appearing in complete control at every moment, tried to cut the tension in staff meetings by telling his terrified cast and writers to relax. “The worst thing that can happen,” he assured them, “is that none of us will ever work again.”

Many of the crew members who worked in Studio 8H and most of the executive hierarchy at NBC thought that was exactly what would happen — and the sooner it happened, the better they’d like it. When Lorne started putting together the show’s cast and writing team during the summer, he’d decreed that no one who’d ever worked in television before would be hired. He was looking for what he called “enlightened amateurs,” meaning talented renegades from the thriving underground comedy scene who were contemptuous of everything network television in those days stood for — a nearly relentless bath of mainstream mush.

Lorne’s demands, and the attitude that inspired them, hadn’t gone over especially well with the old-timers in 8H, many of whom had been working there since the days of Milton Berle’s "Texaco Star Theater." They recognized immediately that, whatever “enlightened” was supposed to mean, the amateurs Lorne had hired were just that: amateurs who didn’t have a clue what it took to actually make a television program. Almost as quickly, Lorne realized the show was going to need some seasoned support and backpedaled, but the damage had been done. Thus "SNL" premiered in the midst of hostile territory. The show had managed to get as far as it had mainly because of the support of one man — NBC President Herb Schlosser. Pretty much everyone else in the building had done as little as possible to help the scruffy, pot-smoking, disrespectful troops of "SNL" before the show went on the air, and they couldn’t wait to see them fall flat on their faces when it did.

The guest host for the premiere show was comedian George Carlin, who was chosen, Lorne said in a press release, because “he’s punctual and fills out forms well.” The real reason was that Lorne didn’t want to subject hosts he cared about more, like Lily Tomlin and Richard Pryor, to the trauma of a first show — he wasn’t sure, he told us, that he’d be able to “protect” them adequately.

Carlin had no idea what he’d signed on for when he arrived and what he saw didn’t make him comfortable. A practitioner of the standup monologue, he found himself booked on a sketch comedy show run by a bunch of neophytes. Partly for that reason and partly because he was, he later admitted, “in another world” on cocaine at the time, Carlin stayed aloof from the proceedings, declining as the week went on the opportunity to appear in any of the sketches he was offered.

NBC, for its part, was extremely nervous about having Carlin appear, live, on its airwaves, given that he’d been the focus of a major free-speech battle over his routine about the seven dirty words you can never say on television. Putting the show on a seven-second delay was considered but eventually abandoned. Network executives, however, did demand that Carlin cut his hair and wear a suit. Carlin compromised: he didn’t cut his hair, but he did wear a three-piece suit — with a blue t-shirt rather than a white dress shirt and tie underneath.

One of Lorne’s nightmares for the first show was that he’d run out of material 30 minutes before it was supposed to go off the air. In order to make sure that wouldn’t happen, he booked what turned out to be a ridiculous number of guests. Besides Carlin there were three other standups: Billy Crystal, Andy Kaufman and Dan Aykroyd’s longtime comedy partner from Canada, Valri Bromfield, and not one but two musical guests, Janis Ian and Billy Preston (as close as Lorne could get to his original targets, Carole King and Stevie Wonder).

During the hour between dress rehearsal and the air show, Lorne realized he’d overcompensated and told Crystal and Bromfield they’d have to drastically cut their routines. Crystal’s manager, Buddy Morra, vehemently resisted, and for once Lorne lost his temper, ending up in a shouting match with Morra in a hallway outside 8H. Morra insisted that if Lorne didn’t relent he and Crystal were walking. Lorne didn’t, and they did. Instead of making his network TV debut, Crystal soon found himself riding a train home to Long Island, his face pressed against the window, wondering how things could have gone so wrong.

The first full run-through of the premiere show, on Friday night, October 10, didn’t go well. Somebody forgot to make sure that there was an audience in Studio 8H, and at the last minute, pages from NBC’s Guest Relations staff were outside 30 Rock, pulling in any warm bodies they could find. Thus a fair number of those who witnessed SNL’s first full rehearsal were homeless people taking the opportunity to spend 90 minutes off the street.

They got more than they bargained for: the rehearsal ran at least twice the show’s allotted 90 minutes and, thanks to a sound system that hadn’t been significantly upgraded for decades — certainly not to the standards needed for both sketch comedy and rock and roll — few people in the audience could hear what was being said onstage anyway.

NBC’s vice president in charge of late-night programming, Dick Ebersol, who had hired Lorne and helped run interference for him within NBC, managed at 2 a.m. to find an outfit called Hollywood Sound that was in the process of breaking down the sound system they’d used that night for a concert at Madison Square Garden. With the help of a generous disbursement of network dollars, Ebersol convinced them to truck their equipment over to 30 Rock, where they worked all night setting it up for the premiere.

They worked alongside the stagehands, who with set designers Eugene Lee and Leo Yoshimura were frantically trying to finish home base — the main set. Lee had stubbornly insisted, for authenticity’s sake, on using real 8 x 8-inch facing bricks for the floor, instead of the more conventional contact paper or paint. The bricks weighed half a pound apiece and had to be cut to fit. The carpenters at the Brooklyn set shop had refused to build the bricks into the set, saying they’d break when they were trucked to Manhattan. Instead, the bricks arrived at 30 Rock in a crate along with a single carbide saw blade. To Yoshimura, the message was clear: “Cut them yourself, asshole.”

Yoshimura was still finishing the set a half an hour before show time. Every few minutes Dick Ebersol would run up to him to ask, “Are you gonna get done? Are you gonna get it done?” Yoshimura, who at that point had been without sleep for several days, shrugged and said, “I don’t know Dick. If I don’t, you can fire me.”

John Belushi was at the center of another drama that unfolded just before air time. Like all the cast members, Belushi had been insulted by the salaries the network had offered the Not Ready for Prime Time Players, for good reason. NBC was demanding that the performers commit themselves to the network for an absurd length of time — five years — for an even more absurd amount of money – $750 a show in the first season. Take it or leave it.

For much longer than the other cast members, Belushi kept insisting he wasn’t going to take it, and by 11 o’clock the night of the premiere he was still refusing to affix his signature to the deal.

With ever-growing desperation — Belushi was one of two characters in the show’s opening sketch, and he wouldn’t be able to go on without a contract — Ebersol kept begging him to sign, but Belushi was having none of it. Finally he spotted Lorne’s manager, Bernie Brillstein, who was standing nearby, and waved him over. “This guy is telling me this is favored nations,” he said to Brillstein, referring to a common clause in ensemble show contracts that ensures every cast member is paid the same. “The only way I’ll sign,” Belushi continued, “is if you tell me it’s fair, and I’ll only sign if you represent me.”

Brillstein shrugged and said fine, and Belushi took Ebersol’s pen and signed. Crazy John Belushi, Brillstein would later reflect. He conned himself right into a deal with the boss’s manager. Crazy like a fox.

(Like most show-biz contracts, the initial one Belushi and the other cast members signed turned out to be negotiable. As their stardom increased, so did their salaries, in both cases precipitously.)

And it wasn't even an immediate hit

The first show did come off without any disasters, although afterward it disappeared more or less soundlessly into the late night void. Contrary to popular belief, "SNL" wasn’t an overnight success — far from it. Ratings for most of the first season were unimpressive. It stayed on the air partly because it had strong support from young newspaper critics and partly because it seemed to be building an audience among young viewers, including the teenaged children of many of NBC’s top executives, who were begging their fathers to get them tickets to the show. (One of those influential offspring was Herb Schlosser’s son Eric, who attended the show often and who later became the author of the best-selling exposé, "Fast Food Nation.") "SNL" didn’t qualify as a genuine hit until its third season.

One viewer on Oct. 11, 1975, got the joke immediately, however. Steve Martin had watched the premiere in Aspen, Colorado, and remembers not laughing so much as looking on in wonder. “Fuck,” he said to himself as the credits rolled. “They did it. They did the show everyone should have been doing."

Jeff Weingrad, with Doug Hill, is the co-author of "Saturday Night: A Backstage History of Saturday Night Live," available in print and ebook versions from Untreed Reads.