The big "black racism" lie: The toxic right-wing trope that shrouds the truth about white supremacy

Anthea Butler's criticism of Ben Carson has the right braying about the "real" racists. Here's what they're up to 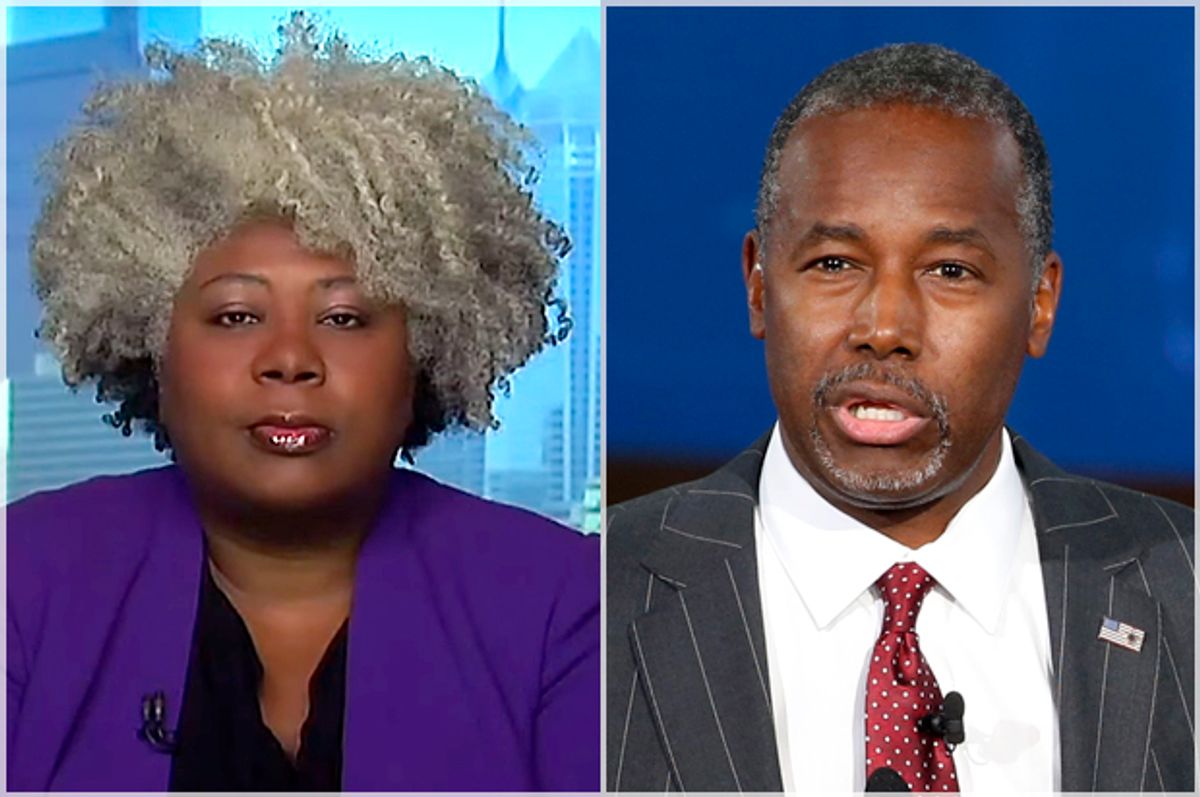 We were sitting in the family car waiting for my mother to return from an errand. A man trotted by. The man seemed impossibly old to me—I was 10 and anyone over 40 was ancient—as he nodded a look of affirmation towards my father. Dad, still in his work clothes, smiled back, waving his hand through the open car window.

He then mumbled, “What a fucking coon.”

There were two black men, and one black boy, all within a few shades in skin tone from one another, “high yellow” to dark brown, yet one was somehow marked with a racial slur, uttered by one black man towards another.

My father turned around, leaning towards me from the big front seat of the Plymouth Grand Fury. He sensed my confusion. Black boys and girls, for matters of survival, must be told about the nature of life in a country where the color line still looms, with life chances and survival often decided by the capriciousness, meanness, or random generosity of white people. The noble idealism of colorblind fantasies must be crushed by hard realities, the sooner the better for young black and brown boys and girls.

My father then told me how that man, a black man like us, would do anything to please a white person. He would talk black people down in public, was embarrassed to be black, and lived to win the smiles and approval of white people at any cost...even his self-respect. Such a man is an embarrassment to his race, and himself, and should be shunned.

In private spaces people can share harsh talk and mean truths with a reasonable expectation of privacy. The power, danger, and allure of the Internet and Social Media are that those once private conversations and thoughts can now be laid before before strangers. And those strangers may not be fair players, operating with the best of intent, or intellectually honest.

Earlier this week, Professor Anthea Butler shared her disgust towards Republican presidential primary candidate Ben Carson, describing him on Twitter as “coon of the year.” I share her sense of upset with Ben Carson’s betrayal of The Black Freedom Struggle, willful lies about African-American history and politics, and how he, like other black conservatives from the Reagan era onward, is a professional “best black friend” for the Republican Party and the White Right. Carson, as a leading member of the black conservative cadre, serves as human chaff and a defense shield, a man whose primary purpose is to make excuses for white racism.

The right-wing media pounced on Dr. Butler because they are obsessed with seeking out mythic “black racism” or some example of “hypocrisy” by the Left on matters of race and justice. “Liberal racism” is also a perennial fixation for the right-wing hate media; they chase this chimera because one such discovered instance would, in their minds, erase the sin that is decades of white supremacy and racism as political strategy for the Republican Party.

Words have meaning, history, and context.  “Coon” is a racial slur which can trace its origins back to chattel slavery, and that rose to prominence with the 19th- and early 20th-century American blackface minstrel show.

Blackface minstrelsy was America’s most popular form of entertainment. As Eric Lott describes in his essential book "Love and Theft," blackface was a space for white people to negotiate their anxieties about labor, capitalism, and race. In that role, blackface was ultimately a white supremacist fantasy: it was the White Gaze’s ugly wishful dream of African-American life and culture in the post Civil War years and during the terrible reign of Jim and Jane Crow.

Ben Carson and his black conservative brothers and sisters may not be putting burnt cork or shoe polish on their faces. But, they are doing much of the same type of regressive and reactionary political work.

Anthea Butler’s comments about Ben Carson are challenging for some white folks (and some people of color) because they are a peek into black private (and semi-private) talk and spaces. The language of “house negroes," “Uncle Toms," “sellouts," or “Oreos” is not new. It is part of a centuries-old black vernacular and common sense folk tradition in the Americas and elsewhere. Consequently, that language is now summoned by Black Twitter, the black blogosphere, and other digital media.

In fact, the phrase “coon of the year” is actually quite common: it is an insulting and mocking award of sorts given online to those black folks, almost always self-described “black conservatives," who have been perceived as betraying the humanity, progress, self-respect, and dignity of Black America.

There is actually a very popular African-American radio and online personality named Tariq Nasheed who features a recurring skit known as the “Coon Train." This is a parody of the iconic TV show “Soul Train," wherein black conservatives (and some others) are mercilessly mocked for betraying Nasheed’s standards for black dignity, self-respect, and honoring the long Black Freedom Struggle.

The right-wing media’s faux controversy and concern about Ben Carson and “black racism” is one more example of how movement conservatives are binary thinkers with little understanding of nuance, and even less capacity for critical thinking.

The relationship between context and language is apparently unknown to them.

The insincere “colorblindness” of post-civil rights era has also spawned such foolishness as complaints that it is “unfair” and “racist” to tell white folks that they should avoid using hateful language like the word “nigger," or as indicated by recent research, how a majority of white people actually believe that anti-white racism is now a bigger problem in the United States than discrimination against African-Americans.

If the right-wing media were actually concerned about anti-black racism, they would stand strong in support of Black Lives Matter, shame racist white conservatives, or fight back against the white supremacist nativism and bigotry that drives Birtherism, the Tea Party, and Donald Trump’s popularity.

Instead, the right-wing propaganda machine is silent -- except when it is ginning up and circulating white racial resentment, animus, and paranoiac thinking towards black and brown people. It is far easier to concern-troll Anthea Butler, and her statement that Ben Carson has betrayed the Black Freedom Struggle as “coon of the year," than to talk seriously about the persistent facts of white supremacy, white privilege, and white racism in the Age of Obama.