We must pay attention to Yemen: Weddings bombed, civilians killed -- with U.S. help 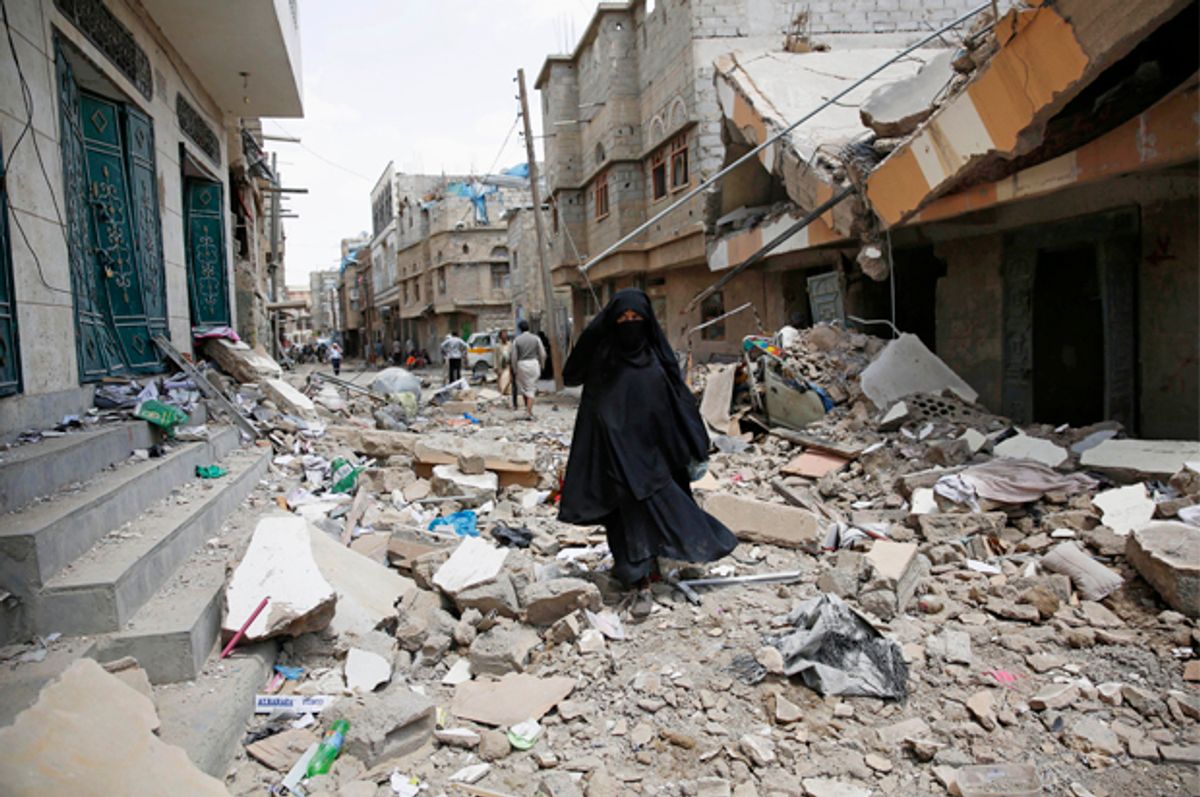 Weddings are supposed to be the happiest days of our lives. For Yemenis in the past two weeks, however, weddings have not just been some people's least happy days, they have their last days, period.

At least 47 civilians were killed and 35 injured on Thursday after the bombing of a wedding in Yemen. Dozens of people are missing. Officials say hospitals are overwhelmed with victims.

The Saudi-led, U.S.-backed coalition that has repeatedly bombed the rebel-held area for months denies responsibility for the airstrike. Just 10 days before however, on Sep. 28, the coalition attacked another Yemeni wedding, killing 131 more civilians, including at least 80 women.

The Saudi government claimed the former wedding bombing -- which marked the deadliest day in the over six month-long war in Yemen -- was an accident, insisting it had meant to target Houthi rebels. A representative of humanitarian organization Doctors Without Borders who was present during the attack, nevertheless, said that there was no military presence near the wedding.

U.S. politicians and media outlets have been remarkably quiet about the war that has devastated Yemen for over half a year now. Fighting broke out on March 26 between a coalition of Middle Eastern nations and militants loyal to President Abd Rabbuh Mansur Hadi, led by Saudi Arabia and armed by the U.S. The coalition is combating Houthi rebels and militants loyal to former President Ali Abdullah Saleh, some of whom have received weapons from Iran.

U.N. Emergency Relief Coordinator Stephen O'Brien said he was "deeply disturbed" by the bombing of the wedding. "95 percent of the Yemeni people killed or injured by explosive weapons in towns or cities were civilians, according to a recent report, and more than half of all the air strikes occurred in towns or cities, often in densely populated areas, resulting in very high numbers of civilian casualties," the top U.N. humanitarian official added.

Mere days after the fighting began in the spring, coalition forces killed around 40 people and injured 200 more after attacking a Yemeni refugee camp, establishing a tenor of brutality that has continued unmitigated for the next over 150 days. Less than a month later, the U.S.-backed coalition bombed an Oxfam warehouse full of life-saving humanitarian aid.

Around two-thirds of civilian deaths and property destruction have been caused by the Saudi-led coalition, according to the U.N. Amnesty International has also revealed that "more civilians have died as a result of coalition airstrikes than from any other cause during the conflict in Yemen."

The U.S. has not directly militarily intervened in the war, but it has steadfastly backed the coalition. In a recent statement, Amnesty International blasted the U.S. for its role fueling the conflict. Citing "damning evidence of war crimes by the Saudi Arabia-led coalition, which is armed by states including the USA," Amnesty called on the U.S. and other nations to stop exporting arms.

Amnesty says weapons provided by the U.S. have been used to commit war crimes. Its investigation found "a pattern of appalling disregard for civilian lives displayed by the Saudi Arabia-led military coalition which declared the entire cities of Sa'da and nearby Marran - where tens of thousands of civilians live - military targets in violation of international law."

The Obama administration made over $90 billion in arms deals with the Saudi monarchy between 2010 and 2014. The White House also said it "welcomed" the appointment of Saudi Arabia as the head of a U.N. Human Rights Council panel. Days later, the U.S. and other Western allies helped Saudi Arabia block a U.N. inquiry into war crimes committed in the war in Yemen. In lieu of an independent international investigation, Washington and its allies approved a resolution that would allow the coalition-backed Hadi government investigate itself.

Human Rights Watch has also accused the Houthis of engaging in human rights violations. Ansar Allah, another name for the rebels, "has unlawfully deployed forces in densely populated areas and used excessive force against peaceful protesters and journalists," the human rights organization said.

Yemen is the poorest country in the Middle East. Before the war began, more than half of Yemenis lived on less than $2 per day and had no access to clean water.

A Saudi siege has crippled the already impoverished country, which imports 90 percent of its food. Because of the blockade and U.S.-backed war, rights groups warn 80 percent of Yemen's population -- 21 million people -- are in desperate need of humanitarian aid.

Save the Children has said the "war has left Yemen, already the poorest country in the region, mired in a humanitarian crisis." U.N. Humanitarian Coordinator for Yemen Johannes van der Klaauw called the situation a "humanitarian catastrophe."

The Western-fueled war has completely destabilized Yemen, and has given ISIS and al-Qaeda the opportunity to seize large swaths of territory. Just two weeks after the fighting broke out, U.S. Defense Secretary Ashton Carter warned that the "disorder" in Yemen had strengthened al-Qaeda in the Arabian Peninsula (AQAP). Now ISIS has taken control of parts of the country as well.

March did not mark the beginning of warfare in Yemen. Yemenis have endured violence for years, particularly under the covert drone war carried out by the Obama administration. Less than two years ago, in December 2013, a U.S. drone shot four missiles at a wedding convoy in Yemen. A dozen people were killed.

Farea al-Muslimi, a Yemeni journalist and human rights activist, testified before the Senate Judiciary Committee in 2013. He condemned the U.S. drone program, which he said made terrorism even worse while it terrorized civilians. Al-Muslimi explained,

"When [Yemenis] think of America, they think of the terror they feel from the drones that hover over their heads, ready to fire missiles at any time. What the violent militants had previously failed to achieve, one drone strike accomplished in an instant. There is now an intense anger against America in Wessab [a village in Yemen].

This is not an isolated incident. The drone strikes are the face of America to many Yemenis. I have spoken to many victims of U.S. drone strikes, like a mother in Jaar who had to identify her innocent 18-year-old son’s body through a video in a stranger’s cellphone, or the father in Shaqra who held his four- and six-year-old children as they died in his arms. Recently in Aden, I spoke with one of the tribal leaders present in 2009 at the place where the U.S. cruise missiles targeted the village of al-Majalah in Lawdar, Abyan. More than 40 civilians were killed, including four pregnant women. The tribal leader and others tried to rescue the victims, but the bodies were so decimated that it was impossible to differentiate between those of children, women and their animals. Some of these innocent people were buried in the same grave as their animals."

The three aforementioned attacks on Yemeni weddings are not the only of such examples. At least 30 guests at an Afghan wedding were killed in a U.S. airstrike in 2002. 47 civilians were killed after the U.S. bombed a wedding in Afghanistan in July 2008. Just a few months later, in November, the U.S. killed 37 more civilians at another Afghan wedding party.

Between the beginning of the Afghanistan War in 2001 and the end of 2013, the U.S. bombed at least eight wedding parties.