Dumb Bernie Sanders delusions: Progressives who champion Sanders need to consider this -- and no, it's not the Supreme Court 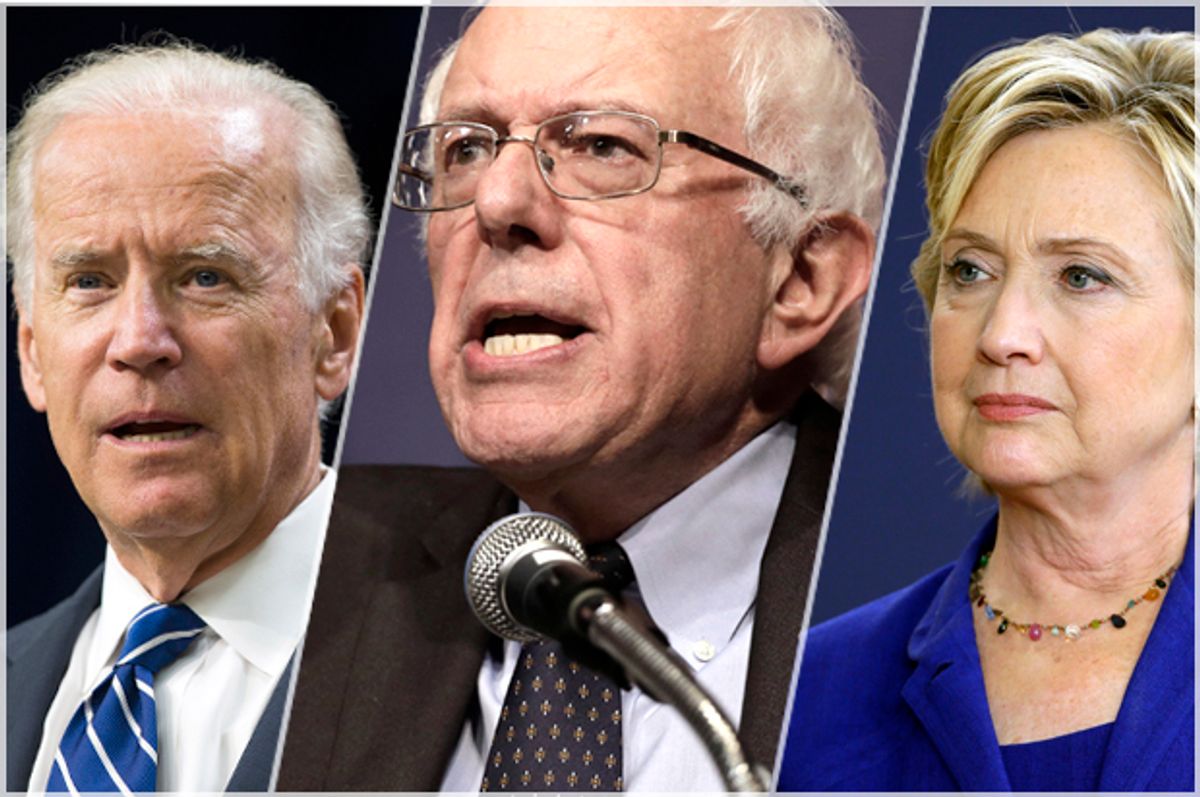 Images of dead children awash on the shore haunt social media feeds and appear throughout mainstream media coverage of the global refugee crisis. The corpses of children are the gruesome results of a confluence of factors, but we must acknowledge and examine our own influence and impact – incalculable and destructive – on the creation of catastrophe.

The war in Iraq, the invasion of Libya and a continued commitment to bomb, maim, disrupt and demolish Middle Eastern nations and peoples – all but killing any hope for stability in the region – produces horrific tragedy and atrocity. As the body count rises, the barely audible American discourse on the consequences of its foreign adventurism and militarism does little to recognize its tendency to poison what it claims to protect, and pollute the economic, moral and political environment at home.

The United States of America has a president who reportedly bragged to aides -- drolly sarcastic or not -- that he is “really good at killing people,” and demonstrates his skill with weekly drone strikes in Afghanistan, Pakistan, Yemen and Somalia. According to a rapporteur for the United Nations, and a joint study from New York University and Stanford, most of the victims of drone strikes are innocent civilians. Reprieve, a human rights organization, studied the available data on drone strikes, and reported that the Obama administration has targeted 41 men for extrajudicial assassination, but its missiles have killed 1,147 people. Without presentation of evidence, even when the targets are American citizens, the United States government now claims the right to kill people, while casually dismissing the women, children and innocent men with the poor luck to stand near a “suspected terrorist” as “collateral damage.”

Simultaneously bombing multiple countries, killing civilians and illustrating the validity of the CIA “blowback” theory by creating enemies faster than it can count – is not sufficient for the American project of extending its military might into every planetary corner. According to investigative journalist Nick Turse’s new book, "Tomorrow’s Battlefield: U.S. Proxy Wars and Secret Ops in Africa," America conducted 674 missions in Africa last year alone.

The maintenance of global control through means of intimidation, death and devastation does not come cheap. Even as America accumulates a large national debt, allows its infrastructure to steadily weaken, and provides fewer social services and resources to its poor, sick, elderly and disabled, it spends 27 cents of every tax dollar on the Pentagon.

Watching the sophomoric theater of the presidential race, one would get the impression that the United States is a neutral international actor, comparable to Switzerland or Luxembourg. Aside from the chorus of Republican zealots calling for more bombs, and less diplomacy, there is little to no discussion of America’s imperial presence around the world, and it’s increasingly garrison priorities at home. One would think that America does not spend over half of its discretionary dollars on the personnel and machinery of the military, and one would never realize that America is currently in a stage of soft war against several sovereign nations.

The most depressing aspect of the near blackout on foreign policy debate and discussion is that it is not only average Americans who don’t care. It is easy to mock the average citizen for refusing to pay attention to desperate refugees, chaos in the Middle East, American bombing victims, and U.S. veterans suffering from physical disability and psychological trauma. No, the worst part of the silence surrounding America’s aggression is not the obliviousness of average Americans, but the indifference of liberal activists.

It has become nearly impossible to go one minute in liberal quarters on the Internet or elsewhere without seeing or hearing some ecstatic endorsement of Bernie Sanders. The mania of the movement surrounding Sanders is impenetrable by the reality that his policy positions are better suited for the gubernatorial race of Vermont than someone seeking selection as commander-in-chief of the world’s largest and most lethal military. The website for the Sanders campaign through most of September did not even offer a summary of the senator’s foreign policy platform. In fact, other than a brief explanation of why he supports the Iran deal, Sanders does not even identify foreign policy as an issue of his candidacy. He claims “there is a long way to go” when journalists ask him about such an inexcusable absence, but considering the reality of America’s intervention and interference throughout the world, and given the obesity of the military-industrial complex, the refusal to offer particulars on foreign policy should disqualify Sanders as a serious contender for president.

Rebuttals involving his excellent policy proposals on healthcare, education and social services are insufficient: No issue rises above the moral, political and financial emergency of war and militarism. The code red alarms are ringing and flashing throughout the world as the bombs fall, the refugees seek asylum, and the body count increases, but liberals are forever prepared to grant Sanders immunity from his complicity in the creation of instability and misery under the red, white, and blue banner. Sanders has already stated that, if elected, he would continue President Obama’s drone killing program. He has an incestual relationship with defense contractors in Vermont, and he is an unblinking and unwavering supporter of Israel’s worst assaults on Palestinian people. Contrary to his rhetorical opposition to wars, he consistently voted to fund the wars in Iraq and Afghanistan throughout the Bush and Obama years.

Liberal supporters of Sanders who refuse to acknowledge his failure to articulate a foreign policy vision for his administration, or flippantly cast concerns about his collusion with the Pentagon establishment aside with “no one is perfect” or “better than Hillary” refrains, should scrutinize their own values, and answer how they rank more refugees, corpses and amputees in the Middle East and Africa against largely unenforceable rhetoric about “standing up to Wall Street.”

The Sanders candidacy does not represent the totality of American liberalism, but it certainly has liberals excited. Critics of America’s state of “perpetual war for perpetual peace,” to borrow a useful phrase from Gore Vidal, will not find much comfort elsewhere among liberals. MSNBC, having applied for permanent residency in the stale and unlaundered pocket of the DNC, will rarely if ever even utter the words “drone strike” on air. There was hardly even a broadcast debate on President Obama’s intervention of Libya – a unilateral maneuver former Sen. Jim Webb, the only Democratic candidate willing to talk consistently about foreign policy, called a “violation of the Constitution” and an “extreme use of executive power.”

Webb is also a former secretary of the Navy and a dedicated opponent of American militarism. His website provides links to essays he wrote for several publications on why America must cut its Pentagon budget and curb its adventurous aggression around the world. He championed the same causes, along with a massive veteran’s assistance bill, while in the Senate. That he registers at 1 percent in the polls is another painful indication of liberal indifference to foreign policy.

Webb was a Marine during the Vietnam War, and while a draft injected antiwar activism with urgency, college campuses exploded in protest against American policy in Southeast Asia. Elimination of conscription, and obliteration of international solidarity, has led to an increasingly provincial and parochial political culture on contemporary college campuses. Angus Johnston, a historian and curator of StudentActivism.net, has enumerated and mapped every student-sponsored rally at American universities in the academic year of 2014-15. Of the 160 protest events, not one had anything to do with war, military intervention or foreign policy. Meanwhile, debates surrounding trigger warnings and “microaggressions” foment and fester.

It is difficult to imagine a public more detached from the actions of its own representational government. Fifty-eight percent of Americans, according to a recent poll, strongly favor drone strikes throughout the Middle East, and only a minority expressed concern about the loss of innocence life.

The bloody and boneheaded policies of America typically enjoy approval from voters, who only become concerned or critical when American servicemen begin to die in significant numbers, as they did in Vietnam and during the peak of the Iraq and Afghanistan wars. The laudable fact that only seven American military members have been killed in 2015 should bring comfort, but not complacency. Unless one rejects the fundamental equality of all human life, death across the ocean or over the border, especially when the result of American politics and policy, should elicit outrage and inspire vigilance.

Even if the average American does not want to nakedly examine the consequences of American intervention abroad, liberals should understand that the more America interferes with the affairs of other nations, bombs third world people, and undermines the actions of foreign leadership, the likelier it is to alienate potential allies, and make new enemies. To make new enemies is to generate future conflict, and conflict translates to terrorism, war and the commitment of American personnel and treasure in longstanding operations overseas.

Liberals should lead the campaign to end American acquiescence of war and war-like practices and policies from the State. Instead, they are abdicating their responsibility, ignoring Sen. Webb, and surrendering one of the most important issues of the nation’s history and contemporary debate to the beleaguered libertarian wing of the Republican Party. Sen. Rand Paul led the congressional challenge to President Obama’s drone killing of Anwar al-Awlaki, the American citizen turned radical Islamic cleric and supporter of terrorism, and his 16-year-old son. In the first Republican debate, Paul discussed ending military aid to foreign governments, including Israel, by citing the notion that it is illogical and irresponsible to “borrow money from China to give to Israel.”

Given that morality and legality seem to have no influence over American foreign policy, the end of empire will likely emerge out of fiscal anxiety and insolvency. It might be fun to blow up the world, but eventually, we just won’t have the money for it. If liberals are satisfied with that eventual outcome, and if they have the patience to sit through years of unnecessary death and destruction while the cash register slowly empties, they can continue to ignore America’s military presence around the world, and they can continue to act as if bomb craters and dead bodies amount to just one more issue for consideration alongside tax rates, standardized testing, and gay marriage.

Mohammed Tuaiman was a 13-year-old child who did not have the time or space to tolerate the obliviousness of the American public, and indifferent patience of liberals. “I see the death machines every day, and we are scared of them,” he told the Guardian outside his home in Yemen. “A lot of the kids in this area wake up from sleeping because of nightmares from them…They turned our area into hell,” he said.

A few months later he died, just as his father and older brother did in 2011 – blown apart by the death machines.

The lack of interest in the death of Mohammed Tuaiman, and the lack of debate in the ugly face of the U.S. government’s willingness to kill more children under the auspices of a now dubious “war on terror” amplifies the echo of Lady Macbeth – “Here’s the smell of blood still: all the perfumes of Arabia will not sweeten this little hand.”

Liberals, because they know better, are the ones who will most have to live with the stench.