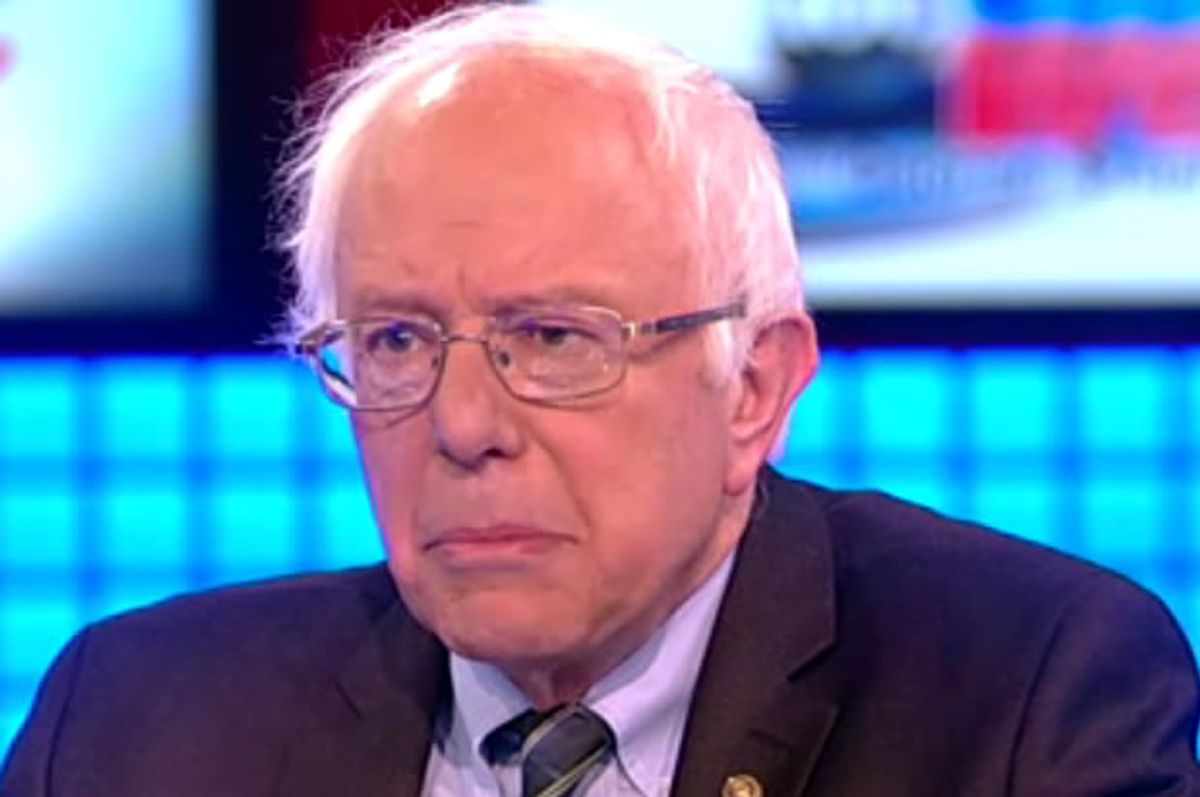 Earlier this week, The Nation announced that Bernie Sanders was not as progressive on gun control as Hillary Clinton, suggesting that Sanders’s mixed record on gun control bills during his 25-year congressional career could give Clinton an edge with primary voters—especially after the mass shooting at Oregon’s Umpqua Community College.

“The Vermont socialist isn’t terrible on guns: Though the NRA endorsed him in his first race for Congress, he has a D-minus rating from the group,” wrote Joan Walsh, national political correspondent, citing his positives first. “He supported the 2013 background-check bill, in the wake of the Sandy Hook massacre, and closing the gun-show sales loophole.”

But she said Bernie has “troubled gun-control advocates with a few vexing apostasies, most notably his vote against the Brady Bill. On that and other gun issues, he has said that he believes states and not the federal government should set limits. He also voted for NRA-backed bills granting gun manufacturers legal immunity against claims by gun victims, and making it possible to carry checked guns on Amtrak.”

Walsh didn’t say that Sanders has consistently supported specific gun-controls during his tenure in Congress, such as banning semi-automatic weapons and high-capacity bullets, nor allowing people to carry concealed weapons across state lines. Instead, she wrote that Sanders has an “open-minded approach to guns” that’s from “his political reality: He’s the senator from a pro-gun state that suffers little gun violence.”

That blurry synopsis is the conventional wisdom about Bernie and guns. It echoes reports from this summer recounting the NRA’s surprising endorsement. And like this detailed Politifact.com summary of all Sanders’s congressional gun votes, it notes that talking about guns is outside his comfort zone of economic inequality and justice.

However, the Nation and the other reports like it don’t shed real light on where Sanders is coming from. They don’t explain why he supports some gun controls but not others. Nor do they ask if there’s a consistency to Sanders’ positions and votes over the years? They simply suggest that Bernie’s position is muddled and makes a good target for Hillary.

Yet there is an explanation. It’s consistent and simpler than many pundits think. And it’s in Bernie’s own words dating back to the campaign where he was first elected to the U.S. House—in 1990—where he was endorsed by the NRA, even after Sanders told them that he would ban assault rifles. That year, Bernie faced Republican incumbent Peter Smith, who beat him by less than 4 percentage points in a three-way race two years before.

In that 1988 race, Bernie told Vermont sportsmen that he backed an assault weapons ban. Smith told the same sportsmen’s groups that he opposed it, but midway through his first term he changed his mind and co-sponsored an assault rifle ban—even bringing an AK-47 to his press conference. That about-face was seen as a betrayal and is the background to a June 1990 debate sponsored by the Vermont Federation of Sportsmen’s Clubs.

I was at that debate with Smith and three other candidates—as the Sanders’ campaign press secretary—and recorded it. Bernie spoke at length three times and much of what he said is relevant today, and anticipates his congressional record on gun control ever since. Look at how Bernie describes what being a sportsperson is in a rural state, where he is quick to draw the line with weapons that threaten police and have no legitimate use in hunting—he previously was mayor of Vermont’s biggest city, and his record of being very clear with the gun lobby and rural people about where he stands. His approach, despite the Nation’s characterization, isn’t “open-minded.”

The debate opened with the simple question, “How would you define a sportsmen?”

Bernie began his reply, “I would define a sportsmen—not as a sportsman, but as a sportsperson, to begin with. There are many women who are involved in hunting and fishing and other outdoor activities. Sportspeople are people who enjoy communion with nature. They enjoy getting out in the woods. They enjoy fishing in a pond. They enjoy taking their kids out away from the hustle and bustle of dail life. And they can be in contact with nature.

In our state, which is one of the most rural states in America, there are tens and tens of thousands of Vermonters for whom going out and fishing, hunting and walking—walking through the snow, walking in the spring—is of extraordinary importance. And very often these are people who do not have the sums of money to go to the yachting clubs, or country clubs, or to buy big boats, but they enjoy what nature has given us. So, as an overview, that’s how I would define a sportsperson.”

As you can see, Bernie—who moved to rural northeastern Vermont in the late 1960s—has an appreciation and feeling for where hunting and fishing fit into the lives of lower income rural people. He’s not a hunter or a fisherman. When he grew up in Brooklyn, he was a nerdy jock—being captivated by ideas and a high school miler who hoped for a track scholarship for college. But like many people who settled in Vermont for generations, he was drawn to its freer and greener pastures and respected its local culture.

Next, the 1990 debate turned to gun control. The moderator, who clearly was a Second Amendment absolutist, went after Bernie—to test his mettle after Smith’s about-face.

That was not the end of his remarks. But it is worth noting that his separating the rights of traditional hunters from the concerns of police chiefs has been a constant thread in many subsequent votes he would take in Congress. It’s also noteworthy that Bernie consistently has opposed assault weapons from the late 1980s—before he was in Congress—which he reiterated to the moderator.

“I said that before the election,” he continued. “The Vermont sportspeople, as is their right, made their endorsement. The endorsed [Republican] Peter Smith. They endorsed [Democrat] Paul Poirier. I lost that election by about three-and-one-half percentage points, a very close election. Was my failure to get that endorsement pivotal? It might have been. We don’t know. Maybe it was. Maybe it wasn’t. All I can say is I told the sportspeople of Vermont what I believe before the election and I am going to say it again.

“I do believe we need to ban certain types of assault weapons. I have taked to police chioefs. I have talked to the police officers out on the street. I have read some of the literature all over this country. Police chiefs, police officers are concerned about the types of weapons which are ending up in the hands of drug dealers and other criminals and our police oficers are getting outgunned.

“So the answer is I would support something simlar to a DiConcini-type bill, which bans about nine very specific types of weapons and allows that decision to be made within the United States Congress and not the bureaucracy. That’s the best answer I can give.”

As has been the case in Sanders’ 2016 presidential campaign, he was accused by Smith in 1990 of taking some positions held by the NRA—opposing some gun controls. He didn’t take that bait. Bernie stood by his defense the rights of rural hunters, and in his closing statement did what he always does—turn the conversation toward what he thinks is the most relevant and big picture issue.

“I think the issues facing Vermont sportsmen and women, the issues facing Vermont’s environmentalists, are tied up with some very basic issues facing the entire country,” he said. “There is something wrong when the best environmentalists in this country tell us if we continue along the same road with energy consumption and energy development, if we continue alongthe same road in term of development, in terms of pollution, in terms of our dependency on the autombile, we may not have an environment to leave to our children and grandchildren. Clearly there must be radical changes in our national priorities. We cannot continue to do the same things that we have done.”

“The sportsmen and sportswomen of this state have the right to know, that in the years to come, that their kids and grandchildren will be able to enjoy the streams, the lakes, and the forests of the state,” he continued. “They can go out and hunt. They can go out and fish. But they are not going to have that unless we begin to control development, which is destroying the countryside, unless we preserve the family farm, unless we radically change the priorities of this nation, so that all people have the right to enjoy life, and not just the super rich.”

At next week’s first 2016 Democratic presidential candidate debate, it’s likely that his opponents will attack Bernie for his stance on gun control. He did not come out after last week’s Oregon mass shooting with a major new gun-control initiative. He issued a three-paragraph statement that was criticized by opponents as being too vague. And it's true that gun control is not an issue that Bernie races toward. But Bernie's statement was remarkably consistent with what he told Vermont sportsmen in 1990.

“The American people are horrified by these never-ending mass shootings," he began. "Our hearts go out to the families and friends of the innocent victims. As a nation, we must do everything we can to put an end to this awful epidemic of senseless slaughter.

“We need a comprehensive approach. We need sensible gun-control legislation which prevents guns from being used by people who should not have them. We must greatly expand and improve our mental health capabilities so individuals and families can get the psychological help they need when they need it. We also have to tone down the incredibly high level of gratuitous violence which permeates our media.

“The shouting at each other must end. The hard work of developing good policy must begin.”