Arthur Chu to Matt Jackson: You're a better "Jeopardy" player than me 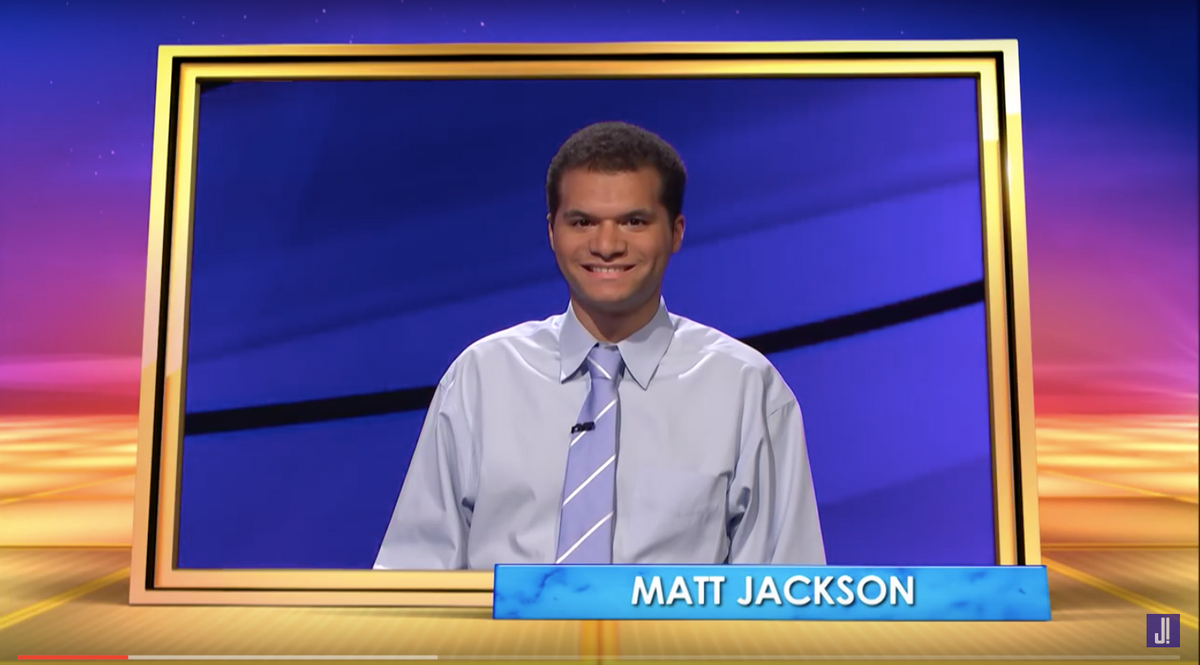 I write this while currently staying in a country (Taiwan, visiting relatives) where people generally haven’t heard of Jeopardy! It’s a relief in some ways, because it means I get to get used to no longer being “the Jeopardy! guy.”

By rights that title should already have been stripped from me multiple times. As much as I enjoyed being the first contestant to break double digits since Dave Madden’s run in 2005 and hitting No. 3 in streak length and total money won in Jeopardy! history, I lost both of those distinctions to Julia Collins a few months later.

Of course, for a lot of reasons, including my inability to keep my mouth shut on social media and the way people insisted on talking about Julia’s gender before anything else about her run, Julia didn’t get the attention relative to me that she really deserved.

And while I did in fact end up beating out Julia in our match in the 2014 Tournament of Champions--with both of us losing in the end to dark horse Ben Ingram, whom I’m told you studied to prepare for your run--I should mention that I personally witnessed Julia being so overcome with the flu during those games that she had to lie down to rest during the commercial breaks. I can’t shake the feeling that my name and Ben’s would have asterisks next to them for that tournament victory.

Even so, the outcome of that year’s tournament left the question of whether Ben, Julia or I was the best player in 2014 ambiguous.

So I’m going to be, I think, the first Jeopardy! champion to set the record straight about your record:

It’s an unambiguous and obvious fact that you, Matt Jackson, are the best player we’ve seen yet in 2015. It’s my opinion that you are a better player than all of us from 2014. In any case, you’re certainly a better player than I was. As a big fan of Ken Jennings and Brad Rutter, the two titans of Jeopardy!, I’m quite comfortable saying you’re in their league.

You’ve already beaten my winnings total and tied my streak length, at 11 consecutive games. Only you and the higher-ups at Sony Pictures Entertainment and your fellow contestants sworn to secrecy know whether you beat my streak tonight, or whether you go on to beat Dave Madden’s streak, Julia Collins’ or even Ken Jennings’.

But if you don’t, it won’t be for lack of skill, it will be because Jeopardy!, like most other games on TV, is at heart a game of chance. Look at Ken Jennings’ first ever game, a nailbiter where he only held first place by $1,300 going into Final Jeopardy! and squeaked through on a judgment call, the judges deciding there weren’t enough famous track and field stars with the last name “Jones” to disqualify him for not giving Marion Jones’ first name.

You haven’t had any nailbiters. You’ve had locked games (with one exception, a near-lock) this whole time. I didn’t develop that level of consistency until my second week on the show. The people who did better than me--Dave Madden, Julia Collins, Ken Jennings--found their stride after tough first games. You’ve had that from the outset.

I’ve read other people’s analysis of your games and a lot of people fall back on saying that speed is the key to your success, pointing out times Alex Trebek has asked you to slow down for his sake and the sake of the unseen humans operating the board. A lot of the haters say your success comes down to having quicker reflexes than your opponents due to your youth.

Here’s what I would say if I were in your shoes: The ability to have your shit together enough to get on national TV at the age of 23 and win Jeopardy! with the reflexes of a 23-year-old is the most impressive thing about your run.

My observations have been that most Jeopardy! champs do best around the age of 30. Ken Jennings was 30 when he had his epic run. I was 30. Julia Collins was 32. Roger Craig was 33.

You’re in an elite club of people who made it big on Jeopardy! in their 20s, along with Dave Madden (24 on his first appearance) and Brad Rutter (22 on his). For most people it seems like 30 is the sweet spot, when your reflexes are still fast enough to be competitive but you’ve had enough time to accumulate knowledge, life experience and discipline to not totally fall apart on TV.

Some people manage to get that knowledge, life experience and discipline earlier than that, and those people get a leg up over the rest of us. Brad Rutter got to be the winningest contestant in game show history--a combined total of $4,455,102--just like most other superstars in most other fields did, by achieving mastery incredibly young and then maintaining it through his prime.

To manage to do what you’re doing at your age is damn impressive. If, God willing, they ever invite me back on a “Battle of the Decades”-style reunion tournament I’ll likely have to face you with the reflexes of a 40-year-old while you have the reflexes of a 30-year-old, and crack up and embarrass myself all over again. I look forward to the experience.

The blessing and the curse in all of this is that Jeopardy! viewers in general, as opposed to the hardcore Jeopardy! nerds, have very short memories. I remember feeling like a shameless media attention hog for letting people shower credit on me for gameplay strategies I’d straight up ripped off from Roger Craig in 2010, Dave Madden in 2005 and Chuck Forrest in 1985 that most Jeopardy! viewers seemed to think was brand new. Now I see people saying the exact same things they said about me 20 months ago about you, as though neither I nor Julia Collins nor Ben Ingram ever existed.

Such is life, and such especially is life when you treat as a serious sport what most Americans treat as something they half-pay attention to while eating dinner.

All I can say is in my opinion the praise they’re heaping on you is far more deserved than what they heaped on me, and the scorn far less so. Unlike me you actually have an onstage persona and onstage shtick--I was never confident in myself enough to do anything like your shtick of counting victories on your fingers--and unlike me you clearly know how to use an iron before going on national TV.

You have the discipline and the common sense to stay off of social media both while preparing for your Jeopardy! run and while dealing with the Jeopardy! press after your run--contrary to the stereotypes about young millennials--so you probably don’t need me to tell you that all of this noise is meaningless. The people calling you “robotic” and “smug” and other adjectives they like to throw at anyone too successful for their liking will forget who you are as soon as the next hot trending topic comes down the pike, while your money will still be there collecting interest.

I’m going to close this open letter in the proud tradition of open letters by telling you things you clearly already know, as a way to encourage others to follow your example. Nothing is inevitable. You got here by making choices and cultivating certain skills; where you go afterwards is a matter of making further choices. My own role model through all this has been Bob Harris, who’s a strong Jeopardy! player but not in the Ken Jennings or Brad Rutter league--but who leveraged his short period of Jeopardy! notoriety to launch a new life as an author, speaker and evangelist for microlending.

That’s one option. My poor millennial’s attempt at imitating Bob Harris by making a living writing controversial thinkpieces for online magazines is another. Ken Jennings became a trivia guru, Brad Rutter went to Hollywood, Dave Madden founded the National History Bee, and a ton of other people just kept on doing what they loved with the boost of a few hundred grand helping them along the way.

Whatever it is you choose to do with the opportunity, you deserve it and you should be proud of achieving it. I wait with anticipation to see where you go next and with fear--but in the good way--to see if I ever go up against you on Jeopardy!

Till then, keep chasing those Daily Doubles.