Columbus Day is the next Confederate Flag: The holiday's political context is too unsavory to keep ignoring 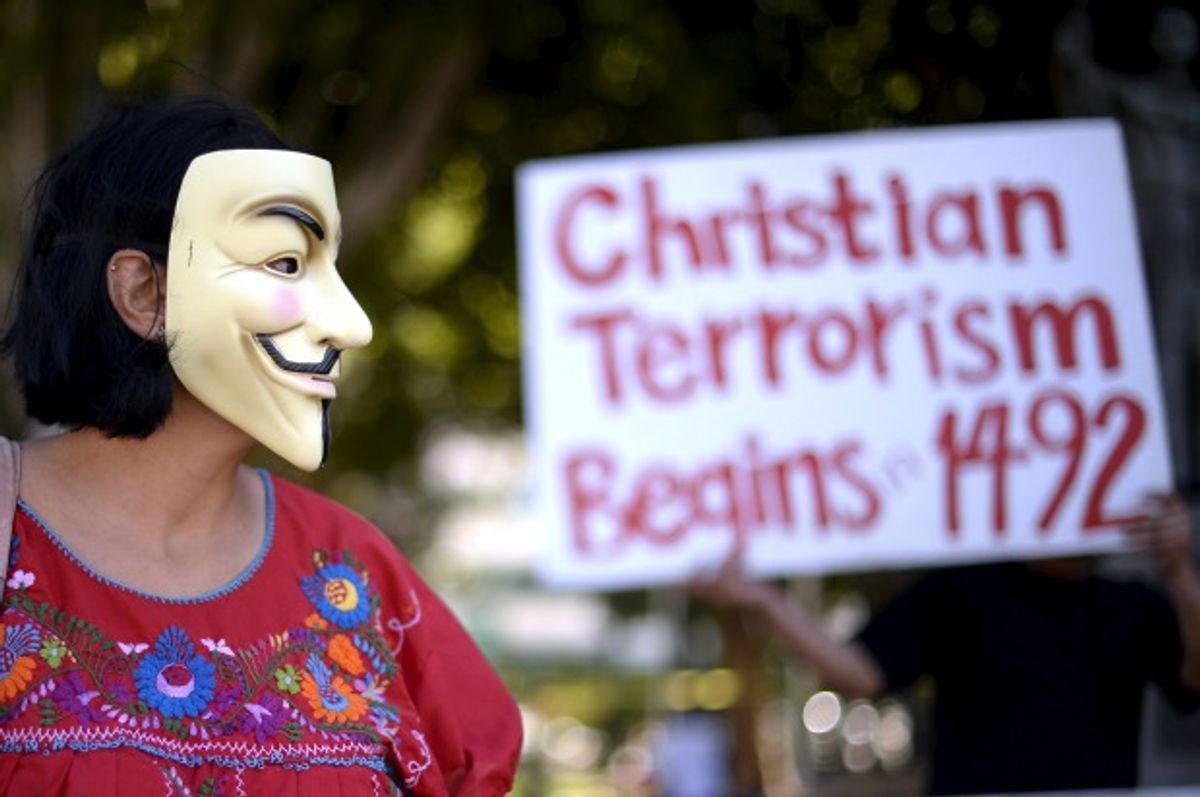 It wasn’t long ago that Columbus Day – which was begun as a Colorado state holiday 1907 by Italian-Americans in Denver – was just one on those days most people didn’t think about much. If you went to school or worked for the government or most companies, you got the day off. (It became a federal holiday in 1930, courtesy of the Knights of Columbus.) Some Italians of Italian descent loved it, Native American activists and Howard Zinn disciples campaigned against it, but most were just grateful for a free October day and didn't really question why.

But over the years, as Americans have become more aware of issues of race, more sensitive to the oppression of Native Americans, and more critical of received myths about our history, the consensus over Columbus Day has been gradually chipped away. One by one, cities – Seattle, Minneapolis, Albuquerque -- have reversed the date the once celebrated the arrival of a European who would turn American life upside down and renamed it Indigenous Peoples Day. It probably hasn’t helped, either, that a lot of employers have removed it from the day-off list.

Indifference seems to be dooming it in some places. “The Pew Research Center found the second Monday in October is ‘one of the most inconsistently celebrated’ holidays,” The Washington Post reports. “Just 23 states and the District of Columbia (plus Puerto Rico and American Samoa) recognize Columbus Day as a paid holiday.”

The Post suggests that the holiday could fade out from apathy, quoting poll data that show how few people care about it. But what's more interesting is how the polarization of American life has focused on Columbus Day. There are people who love and will defend the holiday, but many of the most vocal are nativists and extreme racists; the hashtag #ColumbusWasAHero has been inspiring white supremacists all day. Many of these posts are harsh indictments about those evil, naïve liberals, of course. (Only a few of these take the even-handed approach of a commenter who argues, “If Columbus hadn't discovered America for the Spanish, then the Danes could have, and tacos would have herring on them.”)

On the left, the tone is almost as extreme. Last year, “Last Week Tonight With John Oliver” came up with a classic “How Is That Still a Thing?” on Columbus Day, which includes images of Americans binge-drinking and throwing up in public as it describes Columbus inaugurating “a long tradition of obnoxious white people visiting Caribbean islands and acting like they own the place.” (The bit closes by describing “America’s least favorite holiday” as dedicated to “a murderous egomaniac whose most famous discovery was a case of getting lost and refusing to ask directions.”)

But the laugh-out loud parody of Oliver’s show is positively lightweight compared to the indictment of Columbus himself by Vox earlier today. Dylan Matt’s piece gives us “9 reasons Christopher Columbus was a murderer, tyrant, and scoundrel.” (Here are three: “Columbus kidnapped a Carib woman and gave her to a crew member to rape,” “On Hispaniola, a member of Columbus's crew publicly cut off an Indian's ears to shock others into submission,” and “56 years after Columbus's first voyage, only 500 out of 300,000 Indians remained on Hispaniola,” due to suicide and murder by Columbus’s men.)

It's not just a war of words, either: The Detroit Free Press reports that a Columbus statue going back to 1910 "has been splashed with fake blood, and a hatchet has been taped to his forehead as if it had just been struck."

At this point, it's probably too late for Christopher Columbus — you can't unlearn those history lessons. If a more nuanced point of view is possible at this point – and it’s pretty distasteful to argue in favor of the destruction and enslavement of native people, no matter what – it’ll surely get lost in the noise of social media. It’s not that people on each side are “politicizing” Columbus Day – it’s that the holiday's political context, which has always been there, has become more explicit, and more part of the larger national conversation.

If this kind of intensity keeps up – angry shouters on the pro-Columbus right, angry pleas on the anti-Columbus left – we won't have Columbus Day to kick around. There are surely moderates left of the issue – likely the same kind of Italian-Americans who inaugurated the holiday almost a century ago, motivated more by ethnic pride than ideology – but they won’t matter much longer. We seem very likely headed for a world where Columbus Day resembles the Confederate Flag: if it’s just a mix of Limbaugh-loving crazies defending it, who would want to be seen cheering on "1492 and the ocean blue?"

Knowing what we know now about Columbus, of course, it's hard to be upset about this. We hate to see anyone's day off disappearing in a country dedicated to overwork, but it's time for Columbus to take his last sail.