Wasn't I supposed to be sex-positive?: My teenage summer romance with an older man

He told me age was just a number. I decided he was free-spirited, not creepy, and I was an empowered woman. Right? 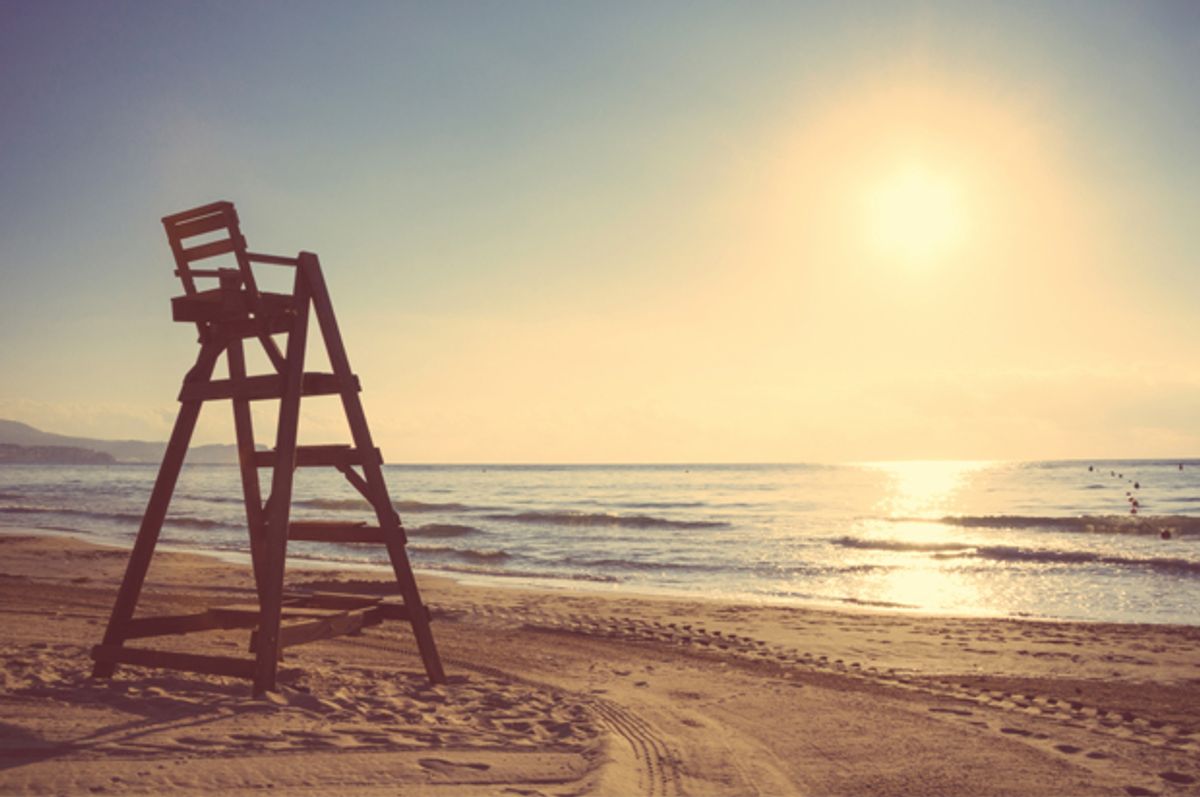 I was 17 when I became entangled in a sexual relationship with a 33-year-old, a stranger I met on a Long Island beach after sneaking out with a girlfriend on a family vacation.

As my friend and I lounged on a lifeguard chair, venting about our sexual frustrations as high school outcasts, two men greeted us, climbed up at our invitation, and offered us each a can of Corona. After one guy went home, the other invited us to join him, without our clothes, in the water.

I had never had a boyfriend. I had never even “hooked up.” And here I was, naked, with a man I barely knew.

As we swam ashore, our conversation returned to sex. His mom was an OBGYN, he said, so he “knew everything.” Titillated, I tested how far this could really go with a question about female anatomy. After he offered to answer with a “demonstration,” my friend took the cue to go home.

We spent hours fooling around on that beach before I tiptoed back into my family’s vacation house and crawled under the covers in the room my friend and I shared.

“He could have been a rapist, you know,” she told me matter-of-factly from the next bed over.

I retorted that he was a martial arts instructor who taught rape prevention courses. That was one of the few things I had learned about him — that, and that he was a musician living in Brooklyn.

I spent the next day replaying that night in my head. I felt giddy, delirious with lust and flattery. The following night, I returned to the same spot, where we again spent hours alone on the sand dunes. We exchanged numbers, and I left the next day.

The following week, I started my freshman year at Brown. We kept in touch, exchanging NSFW photos and texting about Buddhist philosophy. I grew sexually preoccupied, pursuing hookups with my own classmates as well and bragging to my new friends about my mature “friend with benefits.”

I missed my first astronomy lecture to indulge him in phone sex. He walked me through an elaborate script: I’d meet him at his studio apartment; we’d watch "Jeopardy" together, high-fiving after shouting the correct answers; and under his waterfall-like shower head, I’d lose my virginity. Breathlessly, I told him I wanted to make this fantasy a reality. We set a tentative date several weeks into the future for me to travel down from Rhode Island.

In the intervening weeks, I went to see my therapist, listening skeptically when she told me it sounded like I was being used. In fact, I found this interpretation hilarious. I wanted this. Badly. Besides, I’d been on the receiving end of everything we’d done thus far, and he never asked me to reciprocate. I also wondered if she’d say the same to a guy. This was Brown in 2008; “slut-shaming” was part of everyone’s vocabulary. Women were supposed to be sex-positive and uninhibited. And any attempt to condemn or control a woman’s sexuality elicited accusations of sexism.

One discussion in my workshop touched on this lesson, though. The theme was boundaries, and a common story both men and women related was, “I guess nobody really violated my boundaries, but I think I violated my own.” I realized that I, like many young people freshly thrown into an environment with minimal sexual restraints, might be placing myself in a situation that made me uncomfortable.

After all, I’d only seen this man twice. I didn’t have the feelings of love, comfort, or trust I’d been taught should precede “going all the way.” And my therapist did have one point I couldn’t deny: I wouldn’t be going after 17-year-olds when I was 33. When I expressed this concern to my lover, he said age was just a number. I decided he was free-spirited, not creepy, and I was an empowered woman, not a victim.

But as our tentative date drew nearer, my feelings of dread and discomfort mounted. A month earlier, I had never held hands with a boy, and now I was going to have sex with a man in his thirties? My mind could not keep up with my body’s machinations.

Overwhelmed and conflicted, I knocked on my woman peer counselor’s door and confessed all my confusion. She told me my phone-sex partner likely meant no harm, but there’s always that small chance someone does, so going alone to a near-stranger’s home is risky. For the first time, I felt validated in my apprehension but not spoken down to.

In need of another perspective from my peer group, I called my best friend from high school. She said sex with love was worth waiting for, and just as I started feeling defensive, she added, “I’ve said the same thing to guys.” Then she added that she knew of someone who was murdered after going home with a man she’d barely met. She begged me not to go. “Don’t make me threaten you.”

I hung up the phone, then called him. “Hi, so I’ve been thinking, and though this is unlikely, I can’t be 100 percent sure you’re not an axe murderer, so I’m gonna have to pass,” I spoke into his voicemail as I walked across campus. In my teenage mind, this was a cute, lighthearted way to thwart a potentially serious situation.

A situation, by the way, that was not illegal. The age of consent is 17 in New York and 16 in Rhode Island. But seven years later, I see that while legal, it was not entirely ethical, either.

At the time, I thought my eagerness discounted the possibility that he took advantage of me. Now, I see he took advantage of my very eagerness, my desperation. As the standard of affirmative consent dictates, I said “yes” enthusiastically — but I hadn’t cultivated the self-awareness to say “no” when it was best for me despite my physical and emotional yearnings. I hadn’t thought through what I wanted out of a sexual relationship; I hadn’t anticipated the need to. He knew exactly what was happening as I struggled to process it; he went about his days focused on his responsibilities, while questions about what this all meant and how I felt about it kept me up at night and distracted me from school.

“An intimate relationship characterized by disparity of age usually signals commonality of unmet, unconscious needs thought to be fulfilled by the other,” New York sex and relationship therapist Cathy Beaton tells me. My 17-year-old self was teeming with unconscious needs: to feel so attractive that someone with more experience and options would pick me from a crowd despite my age; to receive validation from someone who seemed sophisticated and worldly-wise; to have some form, any form, of contact with the opposite sex before my 18th birthday.

Yet while I definitely desired sex, I had no idea what I wanted to do with this desire. But in my teenage uncertainty and self-consciousness, I believed that if I didn’t seize this opportunity, another one might not arrive.

As far as his unconscious needs, I can only speculate. Perhaps he felt powerful helping me learn about my sexuality, receiving texts I wrote from class because I couldn’t stop thinking about him, watching me hang on his every word as I sought evidence that I was desirable.

But contrary to what I liked to believe, he was not drawn to me because I was mature for my age. I wasn’t. After thinking this affair had made me more grown up, I finally saw myself for who I was: a child playing dress-up.

It took years of reflection, of discussions with women I trusted, to learn that I could be comfortable with my sexuality, opposed to slut-shaming and sexual double-standards, while simultaneously acknowledging that sometimes women (and people in general) are taken advantage of and don’t have complete control over their choices.

When it comes to consent, “no” always means “no,” but “yes” does not always mean “yes.” This is why age-of-consent laws exist: It’s necessary to consider not only whether someone gives consent but also under what conditions the consent was given. When one participant is not emotionally prepared, the consent is given with poor judgment and lack of understanding, no matter how eagerly. After reflecting on this experience, I also realized that sexual liberation doesn’t mean pursuing sex at all costs. It turned out the social mores I’d been trying to rebel against actually appealed to me: I liked the idea of sex within a committed relationship, with a partner I trusted, as an expression of love. And I knew that I wanted my first time to be free from the hesitation and anxiety invoked by that impending trip to Brooklyn.

My second semester, I starting going out with a classmate I met at a friend’s house party. After our second date at the Rhode Island School of Design's art museum, he posed a question in my dorm’s entrance: "How about a goodnight kiss?" It was my first real kiss, I texted a friend afterward, as I skipped upstairs to the room where I’d planned that sexual debut that never happened.

I felt I was reaching a milestone, as I had that afternoon months earlier. But this time, my mind and body were approaching it at the same pace.