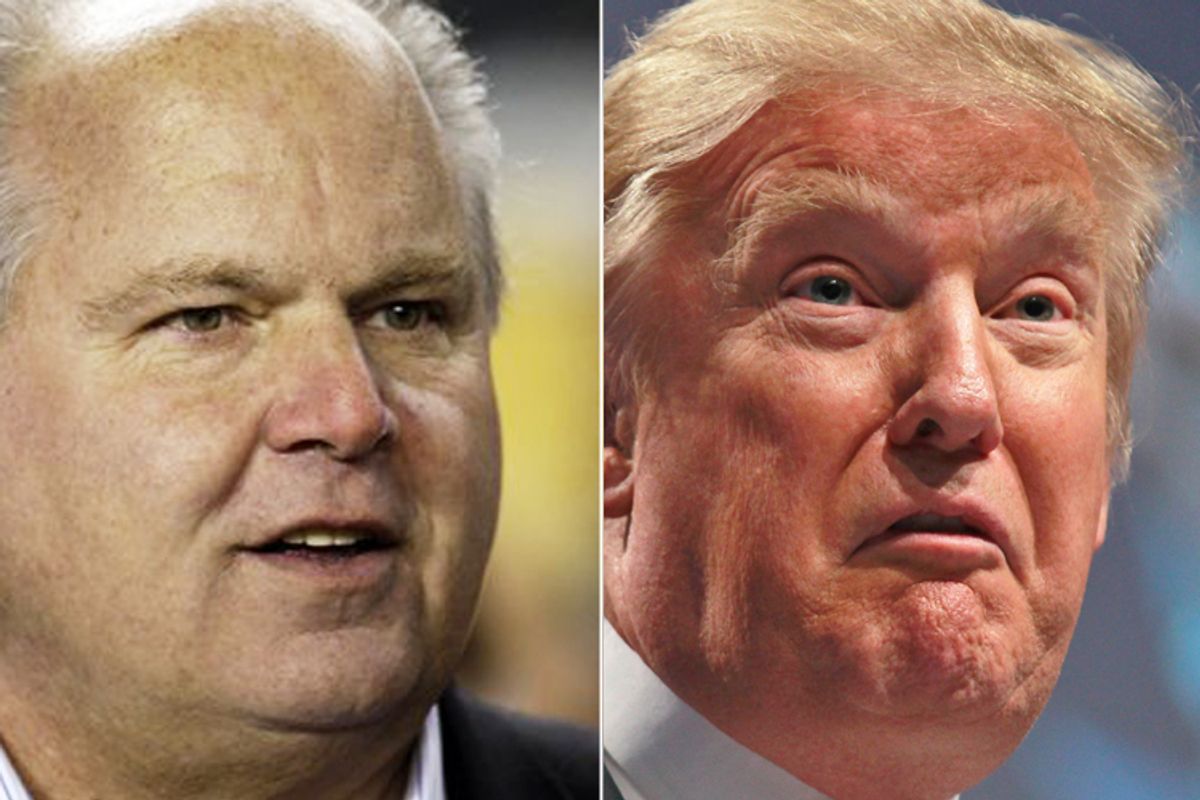 As Scott Eric Kaufman of Salon noted on Monday morning, some folks on Twitter are honoring the Columbus Day holiday with the nauseating hashtag #ColumbusWasAHero. While some liberals are using the hashtag to push back against the adulation of Christopher Columbus, correctly noting that the man was a moral monster, most of the tweets are from right wingers defending the existence of the holiday and Columbus's legacy generally.

Or perhaps the term "right wingers" is too mild, as the racism exploding all over that hashtag is so grotesque that most conservatives would probably blanch at it, sneering that Native Americans were a bunch of untamed savages prior to Columbus's landing and claiming that white people invented everything worth caring about. It's so hateful and wrong-headed that it hardly seems worth arguing against, as there's undeniable, empirical evidence--say, the Mayan temples--that Native Americans did not conform to the "uncivilized" stereotypes being flaunted on this hashtag. Nor is it true, as one tweeter suggests, that liberals believe Native Americans were "cuddly brown teddy bears." Obviously, there were many, diverse Native civilizations over thousands of years and some were more violent than others, just like every other corner of the world. One need not believe that people are perfect in order to believe they don't deserve to be stampeded over, colonized, and wiped out by genocides.

But this hashtag isn't newsworthy because it's so full of misinformation. What is frightening is how truly flagrant all of this is. Right out there in public, people are saying things like Columbus "represents the adventurous spirit of the white race" and that he's a hero for "making North America an extension of White / Western Civilization." There's nothing coded going on here, just a bunch of people openly and shamelessly asserting that white people are morally and intellectually superior to everyone else.

It's yet another sign of the growing boldness of white supremacists online. As Keegan Hankes reported at the Southern Poverty Law Center back in March, white supremacists used to hide out at their own dedicated websites, such as Stormfront or the Vanguard News Network, but now those sites are losing membership. It's not, however, because white supremacists are waking up en masse and giving up bigotry. It's because they've moved to more mainstream venues, like Reddit, where openly racist subreddits became some of the most popular on the board. While Reddit has banned some of the most egregious offenders, but others continue to exist, if often behind a "quarantine," which only means you need a verified email to read or post on them.

And increasingly, as this hashtag shows, the action is moving to Twitter, where white supremacists, seemingly inspired by Donald Trump's popularity and other online hate movements like Gamergate, are seeking more attention and trying to get some of their ideas into the mainstream right. They've met with some success, such as popularizing the term "cuckservative" to describe Republicans perceived as insufficiently racist. The term has its origins in racist porn, and it's gotten to the point where some nervous conservatives have pushed back out of fear that the conservative movement will be seen as embracing white supremacists. But Rush Limbaugh has been alluding to the term on his radio show, suggesting that stuffing that cat back in the bag might be a lost cause.

"White supremacists have been openly talking about recruiting amongst Men's Rights activsts and Gamergaters, with the web's most famous neo-Nazi, the hacker who calls himself weev, saying that Gamergate a gateway drug to white supremacism." David Futrelle, a journalist who covers online misogynist movements, explained over email. He pointed out that many Gamergaters "have literally been repurposing neo-Nazi propaganda" in their online attacks on feminists.

"Meanwhile, Red Pillers,"---a movement of misogynists that believe women somehow oppress men by not having sex with them---"have been leaning hard right in what seems to be an attempt to get attention and web traffic from white supremacists," Futrelle added grimly. It's a development that makes a certain amount of sense. Red Pillers peddle pseudo-biological explanations for what they believe to be female inferiority, so doing the same thing to people of color is not much of a leap.

White supremacists no doubt hope that by taking the message to Twitter and Reddit, and by targeting people who are already peddling ugly right wing ideas, they can draw more people into being open racists.

As was demonstrated over the summer, when a man inspired by online white supremacy walked into a church in Charleston and murdered nine people, this stuff isn't just a bunch of people yapping online, but has the potential to spill out into the real world with often deadly consequences. According to the Southern Poverty Law Center, users of the Stormfront website have been behind almost 100 murders.

There's danger here beyond just the potential for violence. The louder outright white supremacists are, the easier it is for other conservatives to push veiled racism while claiming they're not real racists. After all, no matter how odious Donald Trump gets with his Mexicans-are-rapists-Obama-isn't-American act, he never gets quite as grotesque as the people tweeting things like, "Thank the European explorers for bringing an end to the brutality of the savage aboriginal American Natives" on #ColumbusWasAHero. White supremacists lower the bar, making everyone, even Donald Trump and the Alabama politicians who are shutting down DMV offices rather than let black voters get picture IDs look less evil by comparison. That should worry us all.

After all, the sentiment that white supremacists are trying to push with #ColumbusWasAHero is one that pops up in mainstream conservative media, though it's usually scrubbed of the overt racism. Fox News loves getting huffy about those terrible liberals trying to end Columbus Day just because the man did things like thank the Arawaks for saving his ship by enslaving them and working them so hard that half of them died. The belief that there's something noble about this man is rooted in white supremacy, no matter how you dress it up.  The folks on #ColumbusWasAHero are, at the end of the day, just turning the subtext into text.