The agony and the ecstasy of the Democratic debate: Inside tonight's high-stakes showdown

With tonight's debate a make-or-break event for some hopefuls, a candidate-by-candidate breakdown of what to expect 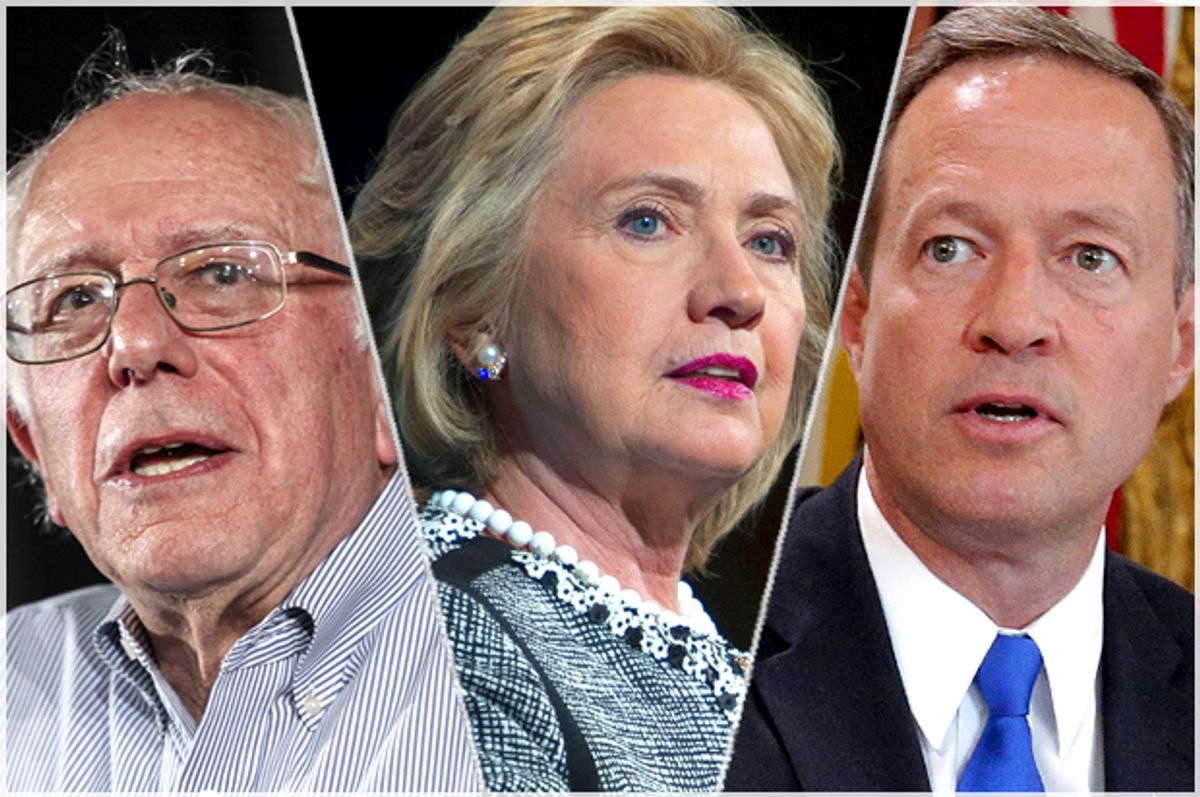 The first Democratic presidential debate airs tonight on CNN. With only five candidates participating, the event should differ considerably from the recent Republican debates, both of which were circus-like spectacles. The hope is that fewer candidates means more substantive questions, and more time to discuss the issues – but CNN is still cable news, so I don’t want to be overly optimistic.

Most of the attention will focus on the frontrunners, Hillary Clinton and Bernie Sanders. The bottom three candidates – Martin O’Malley, Jim Webb, and Lincoln Chafee – have yet to break through, so they will likely look to distinguish themselves with headline-grabbing performances (a la Carly Fiorina). Anderson Cooper will moderate the debate, with Dana Bash, Juan Carlos Lopez, and the reliably banal Don Lemon also asking questions.

Here’s my candidate-by-candidate breakdown of what to expect tonight.

Clinton has the most to lose tonight. The presumed frontrunner for years now, Clinton will have to fend off jibes from her opponents (and tough questions from moderators) all night. In debates like this, the bottom-tier candidates are obliged to go after the person at the top, and that’s exactly what to expect. Every other candidate, including Bernie Standers, stands to benefit from a bad performance by Clinton.

The question for Clinton, then, is how she will respond to these attacks -- implied or otherwise. Will she resort to poll-tested platitudes, or will she defend herself aggressively? She needs to play the part of the experienced frontrunner, the person with the background and the credentials to lead. Clinton isn’t a performer, but she’s extremely sharp and has as good a command of the facts as anyone you’ll hear on a presidential debate stage. Thus, the debate format could well play to her strengths.

The other big question for Clinton is she will handle Bernie Sanders. So far she has resisted the temptation to engage Sanders directly, hoping his campaign would implode, but that clearly hasn’t worked. Now she’ll have to confront him on a debate stage, and that presents a number of challenges. In particular, she’ll have to assuage the liberal base while attacking Sanders, and that’s a perilously thin line to walk. The base has flocked to Sanders for very legitimate reasons. If Clinton goes too far, she risks alienating Sanders’s supporters, whose votes she’ll desperately need in a general election. I expect Clinton to agree with Sanders on most issues but argue that she is better equipped to get things done than he is. It won’t be easy, but she’ll have to say, in effect, that she’s a liberal pragmatist who can accomplish more than a quixotic Sanders, whose limited experience in Washington will hinder his ability to implement his agenda. This is not exactly an awe-inspiring message, but Clinton’s ability to sell it will go a long way in deciding this primary battle.

Sanders's strategy should be simple: continue to do and say what he’s done and said. The reason he’s generated so much grassroots momentum is that he’s tapped into a genuine anger that goes beyond left and right. People are disgusted by an increasingly oligarchic system and Sanders is addressing that disgust in a way that only he can. That Sanders isn’t a product of the Washington machine lends his campaign an air of authenticity that no other candidate has, particularly Clinton. I expect him to take full advantage of that in tonight’s debate. What will be especially interesting to see is how forcefully he goes after Clinton. Thus far Sanders has avoided personally attacking Clinton, choosing instead to focus on his campaign and his record. And obviously that approach has served him well. Tonight, though, he’ll have no choice but to engage Clinton. This will be the first chance Sanders has to really introduce himself to a national audience -- and particularly to nonwhite voters, many of whom are unfamiliar with the Vermont senator.

If Sanders wants to move the meter, he’ll have to appear presidential while clearly distinguishing himself from Clinton. And there are significant differences. Clinton’s corporatist roots and constant flip-flopping on the TPP agreement, for example, are vulnerabilities that Sanders can exploit. In many ways, Clinton represents the very system Sanders’s populist campaign is refuting. For him to succeed tonight, however, he’ll have offer himself as a viable alternative to that system, and he’ll have to convince voters that the experience gap between him and Hillary isn't a liability.

There’s no way to avoid saying it, so I’ll just say it: O’Malley is an afterthought. Like the other two candidates at the bottom of the polls, he has no chance of winning this race. He’s stuck at 1 percent in virtually all of the polls and there’s no reason to expect that to change. O’Malley is a serious person, though. The former governor of Maryland, he boasts legitimate executive experience as well as some interesting liberal policy prescriptions. His strategy tonight will simply be to get noticed. Standing on the stage with Clinton and Sanders will give him an opportunity to speak to more people than he otherwise could. Expect him to go on the offensive early and often, especially as it relates to Clinton. If he can generate a few “moments” tonight, he may be able to alter the post-debate narrative – that should be his primary goal.

No one really knows why Jim Webb is running for president. A Marine and one-term Senator from Virginia, Webb is a curious figure in Washington. He’s a Democrat, but often sounds like a Republican, particularly on foreign policy. Since announcing his candidacy, he’s done comparatively little campaigning, so it’s not clear what he’s doing here. He hasn’t articulated a discernible vision and he’s made no real effort to explain what issues he’s running on. He is, however, very smart and has an interesting background (he was Secretary of the Navy and a literature professor at the United States Naval Academy, among other things). He’s known mostly as a foreign policy guy, so I assume he’ll contribute most on topics relating to national security. Again, though, Webb’s whole campaign is a mystery, it's tough to know what to expect from him tonight. In any event, the debate is a chance for him to boost his profile – if he’s able to do that, it’s a win for his campaign.

It’s very possible that you didn’t know Lincoln Chafee was running for president. A former Republican and Rhode Island governor, Chafee entered the race to even less fanfare than O’Malley and Webb. Like the other longshots, Chafee will benefit immensely from being on the stage tonight. And because there are so few candidates, he’ll have ample opportunity to speak. Having absolutely nothing to lose, I’d expect Chafee to engage the other candidates directly as often as possible. As a former Republican, perhaps he’ll sell himself as someone who can cross party lines and get things done – though I don’t imagine that will resonate much with the people in the room. If Chafee is smart, he’ll treat the debate as an opportunity to introduce himself to the country. He won’t get anywhere near the top of the polls, but he might breathe a little life into his campaign.