The GOP's Benghazi scam is exploding in its face: Why the latest stunning revelations will only make Republicans more extreme

Trey Gowdy's witch hunt has been revealed for the travesty it is, yet conservatives are doubling down on crazy 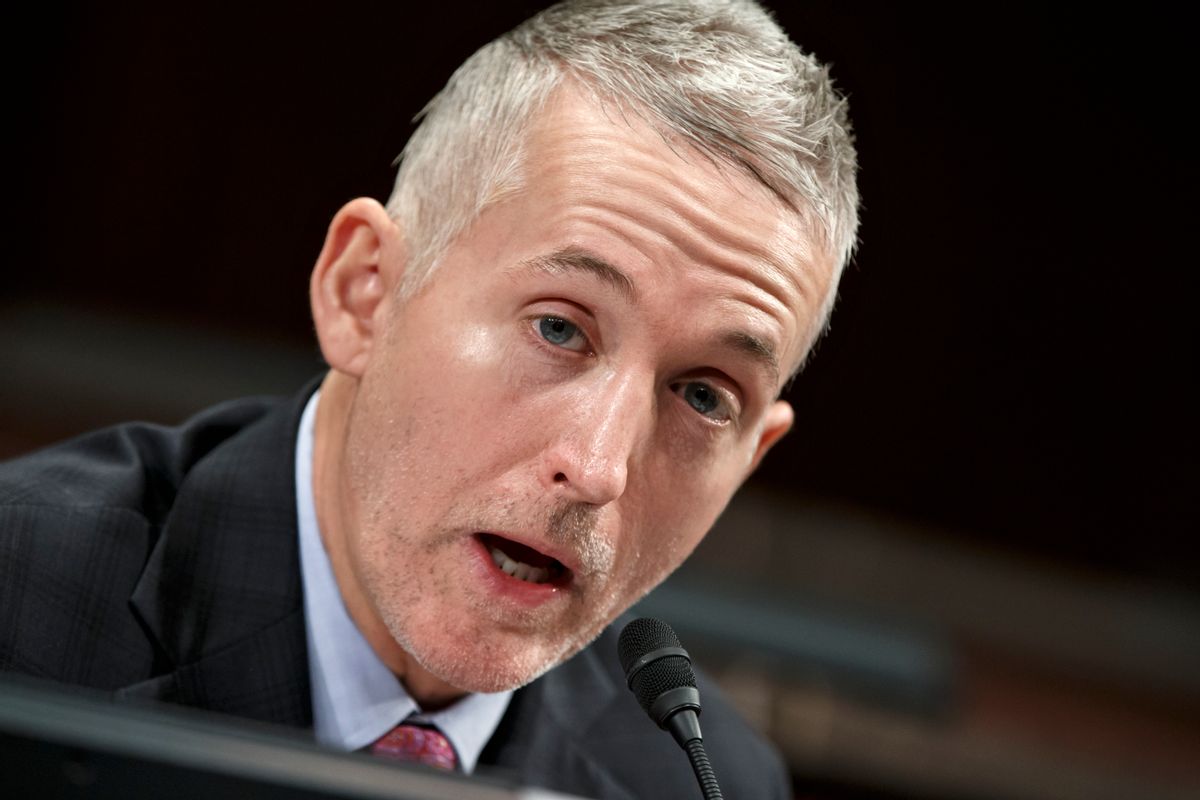 FILE - In this Jan. 27, 2015, file photo, House Select Committee on Benghazi Chairman Rep. Trey Gowdy, R-S.C., demands answers of witnesses from the State Department and the CIA, as it holds its third public hearing to investigate the 2012 attacks on the U.S. consulate in Benghazi, Libya, where a violent mob killed four Americans, including Ambassador Christopher Stevens, on Capitol Hill in Washington. Sidney Blumenthal will testify in closed session June 16, 2015, about frequent emails he sent about Libya when Hillary Rodham Clinton served as secretary of state. Blumenthal worked in the White House under President Bill Clinton and is a longtime friend and adviser to the Clinton family. (AP Photo/J. Scott Applewhite) (AP)
--

Another day, another revelation about the conservative crack-up. Over the weekend a whistleblower, Major Todd Podliska, came forward to reveal that the Benghazi Committee is a sham. Stop the presses. Then yesterday, the New York Times reported that since the staffers on the committee are chasing non-existent Hillary Clinton scandals to the exclusion of everything else they have a whole lot of time on their hands:

With the slow progress, members have engaged in social activities like a wine club nicknamed 'Wine Wednesdays,' drinking from glasses imprinted with the words “Glacial Pace,” a dig at Representative Elijah E. Cummings, Democrat of Maryland and the committee’s ranking member, Major Podliska said. Mr. Cummings used the term to question the speed of the committee’s work.

At one point, several Republican staff members formed a gun-buying club and discussed in the committee’s conference room the 9-millimeter Glock handguns they intended to buy and what type of monograms they would inscribe on them, Major Podliska said.

This is to be expected, of course. After all, there have been eight previous Benghazi investigations so there can't be much left to uncover. And Clinton's emails haven't had anything particularly sexy in them yet, so what's the point?

Benghazi committee chairman Trey Gowdy shot back at the accusations, call them a "damned lie," thus proving that he isn't any more mature and statesmanlike than the average Tea Partier. It's an unpropitious time for these unsavory details of committee malfeasance to emerge, what with the House imploding as it is.

Yesterday the right began to seriously flex its muscle on the "Paul Ryan: Boy Savior" question, and it's not looking great:

In 2012 when Mitt Romney picked Mr. Ryan, Republican of Wisconsin, as his running mate, the concern among some in their party was that Mr. Ryan was too conservative, particularly when it came to overhauling social programs like Medicare and Medicaid.

Now, as he agonizes over whether to answer the appeal of his colleagues to become their next speaker, the far right is trotting out a fresh concern: Mr. Ryan is too far left.

That pretty much says it all.  The man who just two years ago was known as a hard-core Ayn Rand-worshipping conservative is now considered a liberal squish.

But we knew Ryan was suspect when conservative thought leader Laura Ingraham immediately tweeted "three young guns and you're out " as the beltway turned it's lonely eyes to him last week. Only total loyalty to the Freedom Caucus will suffice, and not even the one true Scotsman could deliver on that promise. It's possible Ryan could eke out a vote, but it won't change the current congressional dynamic in which a rump group of fanatics hold the institution hostage to their delusions of grandeur.  It's hard to imagine what would. The sickness that pervades the House Republican caucus will not be cured by any medicine currently available.

And now it appears that the disease has metastasized to the Senate. On Monday, MSNBC's Luke Russert tweeted out a "citizen censure" from the right wing PAC The Madison Project against Senate majority leader Mitch McConnell. Why, you ask? Well, it seems he too has deviated from the program:

For years, establishment Republicans in Washington have gotten away with giving lip service to our principles while supporting policies that betrayed those same principles. NEVER AGAIN! Since the Republicans took the majority in the Senate, Mitch McConnell has cut deal after deal with the Democrats. His record of betraying conservatives before the election has only increased after the election.

Consider that, in this year alone, he:

Failed to support Senator Mike Lee's effort to defund Planned Parenthood in the wake of their body parts trafficking scandal.

Allowed Senator Harry Reid and the Democrats to pass an amendment that reauthorized the Export-Import Bank (Ex-Im) – as a reward the lobbyists on K Street and undeniable corporate welfare. This action was so egregious that Ted Cruz boldly took to the Senate floor and called out Senator McConnell for lying.

Was referred to by George Stephanopoulos as President Obama’s "point man" in the Senate; and

Received a hand-written note of thanks from Barack Obama for his role in the confirmation of Attorney General Loretta Lynch – the number one cheerleader for unbridled Presidential power.

We MUST let Senate Majority Leader Mitch McConnell know that his scheming and backhanded tactics will NOT go unchecked.

They are working themselves into quite a frenzy. Now, the Senate is a different animal than the House and there are fewer opportunities for the kind of mischief we see from the Freedom Caucus. But the outside groups have their sights set on Mitch McConnell and they're going to make their presence known. And he's responding:

McConnell has appointed a special task force to explore changes to the filibuster rule and other procedural hurdles — including whether to eliminate filibusters on motions to proceed to legislation. That’s a tactic the minority often uses to shut down a bill before amendments can be considered...

McConnell, a Senate traditionalist, doesn’t want to do away with the filibuster. He and other Republicans fear a decision to gut the filibuster further would boomerang on the party — especially if Democrats retake the Senate in next year’s elections.

But McConnell and his allies have taken note of the growing pressure, especially after Republicans were unable to block funding for Planned Parenthood or stop President Obama’s nuclear deal with Iran...

Rep. Trent Franks (R-Ariz.) said Wednesday the difficulty of passing bills in the Senate has caused frustration to boil over in the House.

“That’s the primary cause of the division in the House is the filibuster in the Senate,” he said...

One senior senator said freshmen are pushing to get rid of the filibuster on the motion to proceed, which Democrats have deployed to block spending bills this year.

The chamber’s old bulls pushed back by warning that Republicans would regret curbing or eliminating the filibuster once Democrats regained the majority.

That sounds awfully familiar, doesn't it? Could the chaos we are seeing happen in the House infect the Senate? Stay tuned.

The fundamental problem is that young conservative turks in both houses do not like the fact that our constitution requires that they hold both the White House and the Congress if they wish to enact their agenda without any changes or compromises. (And even then it's hardly a given.) They want to change the processes by which legislation is moved anyway and they are willing to make that happen by any means necessary. One might even say that they don't think our constitution provides for a very good system, and neither do the traditions and rules which have been developed over time to facilitate the give and take between the two parties, which is kind of surprising considering that their most precious conceit is that they are, above all, protectors of the constitution.

They believe, as the Freedom Caucus' Giant Slayer, David Brat, said last Sunday that they are doing the bidding of "the American people" whom they seem to be under the illusion are in total agreement with everything they say. They seem not to understand that all those Republicans and Democrats who oppose them also have constituents and the president is elected by a majority of the whole country. Someone should explain it to them.