This was Bernie Sanders' night: The candidate of anger and honesty won the Democratic debate

Like Sanders, Trump is talking past the press and the political class -- and straight to voters who demand change 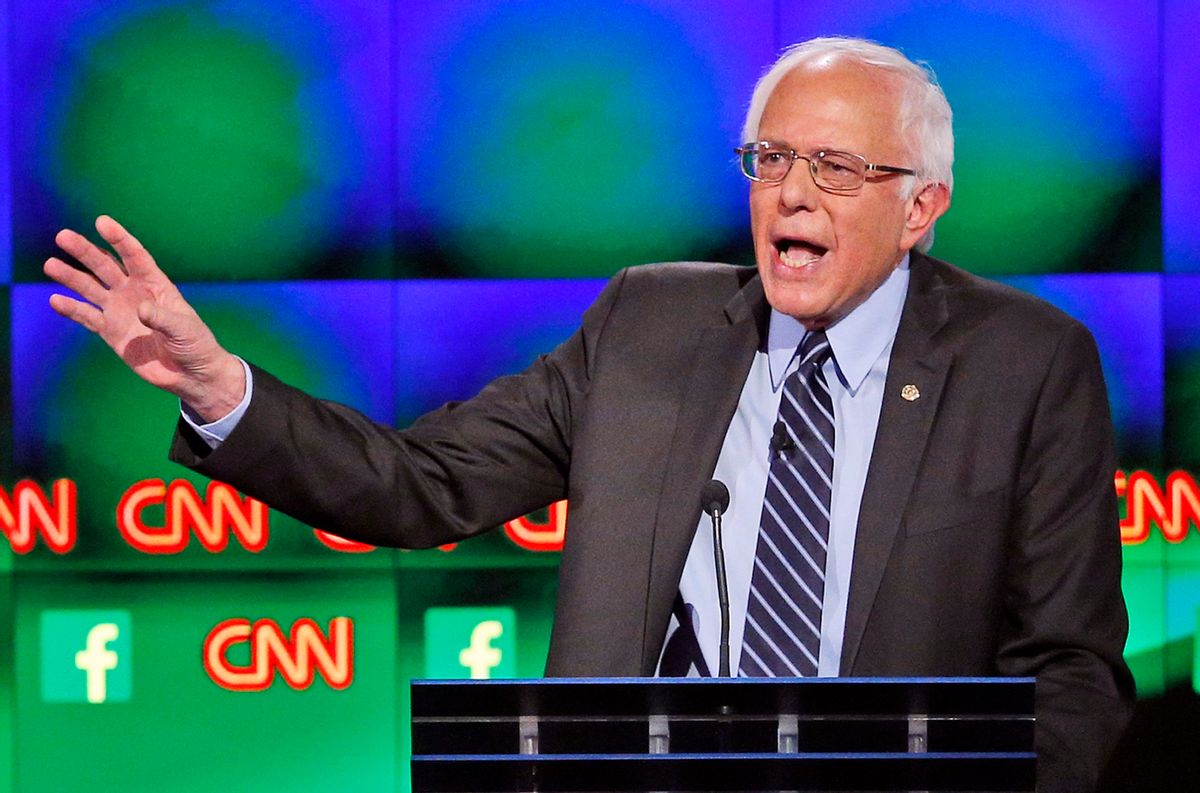 When Sanders, who had the best night Tuesday night in Las Vegas, called for a political revolution, he wasn’t talking to the other candidates onstage or, for that matter, moderator Anderson Cooper, who bought a 10,000 square-foot, 18-bedroom home here in Connecticut last year. Revolution seemed mildly risible to everybody else onstage, in which case they’ve badly misread the level of discontent in this country.

He was talking to the rest of us. When you decide you’re less interested in winning and more interested in saying what you believe, all kinds of possibilities open up. It’s tough to know how well Sanders’s call for a carbon tax and for a Scandinavian-style welfare state will play with a general electorate, but, damn, it was refreshing to hear somebody tell the unfettered truth about climate change, income inequality and the “billionaire class that has so much power” over our political system.

“Congress doesn’t regulate Wall Street; Wall Street regulates Congress,” was the line of the night. Boldly announcing, as Sanders did, that the voters are “sick and tired of hearing about” Hillary Clinton’s “damn emails” was a smooth move that helped Sanders more than it helped Clinton.

Going into tonight, I thought Sanders’ candidacy had a limited lifespan, a boutique voter base and a purpose confined to pushing Hillary Clinton and the press on progressive issues.

Now, somehow, it all seems a little bigger than that. Like Donald Trump, Sanders is talking past the media establishment and permanent political class. Unlike Trump, he has something to say and a long record of voting and speaking on these issues.

It wasn’t a terrible night for Hillary Clinton, and in the early going, she won a round or two from Sanders, especially on guns, where the Vermont senator seemed surprisingly spineless vis a vis what he kept calling the “rural” character of gun users in his home state. Really? You can take on Wall Street but you can’t stand up to a few hundred jacklighters in the Green Mountain State?

But Clinton’s biggest weakness – laid out by Cooper in an early question about her chameleon-like changes to fit the coloration of her political environment – is Sanders’ biggest strength. As Mirabeau said of Robespierre, “He will go far. He believes everything he says.”

In a larger sense, it was a good night for the Democratic field. I’m sitting here in Connecticut, where today’s Q poll rates Joe Biden, the Elijah of Tuesday night, far stronger among the state’s voters than any of the declared candidates from either party. Tuesday would have been a bad night for the Democrats if it made people ask, “Um, do they have anybody else?” The fire of Sanders and the shrewd self-assurance of Clinton dampened that kind of talk.

The other three men onstage erased all doubts about whether they belong in this race. They don’t.

Martin O’Malley: A guy who could dislodge the moth as the symbol for Lunesta but not a real threat to anyone else.

One intangible, for me, was how well Clinton’s emphasis on her gender worked. Commercials for the movie “Suffragette” played all night long on CNN, a peculiar reminder of the torch Clinton is carrying. I thought she sounded weak when she answered the “third Obama term” entirely in chromosomal terms. She sounded strong when she slapped the Republicans for the hypocrisy of using “big government” as the basis for opposing family leave while using the hammer of government to pound Planned Parenthood.

The simple read of Tuesday was that a person basically satisfied with the way things are would be better off with Clinton, and a person desperate for change – desperate enough to start embracing words and ideas almost never used in American political discourse – would favor Sanders. I think I know which way that wind is blowing.