It's not only racist to use food to assert cultural superiority—in this case, it's also incredibly out of touch 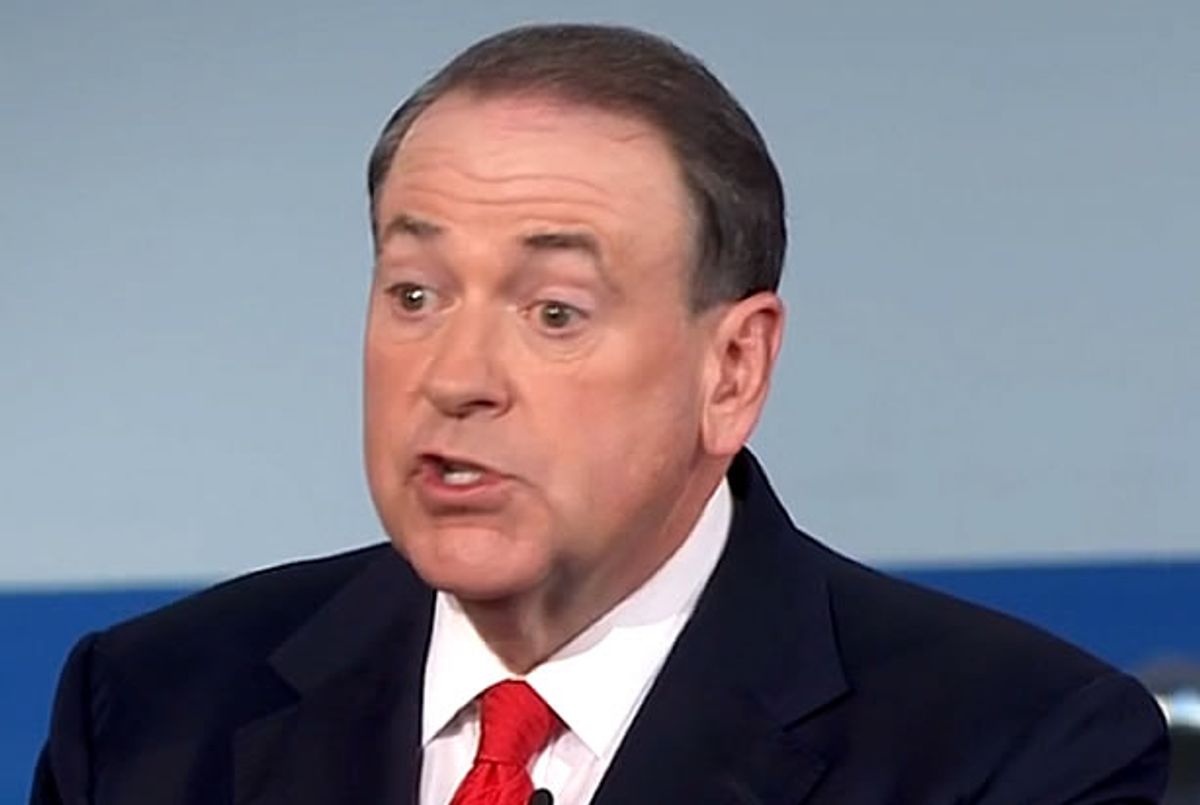 Racist stereotype, or does Bernie Sanders really eat taxes for lunch? Twitter immediately struck back with its version of “people who live in glass houses shouldn’t throw stones,” because Huckabee’s own family has a dog incident of its own. “On 11 July 1998,”Snopes reports, “two young men working as counselors at Camp Pioneer in Hatfield, Arkansas, killed a dog at that Boy Scout camp. One of those young men was 19-year-old Clayton Frady of Texarkana and the other David Huckabee, the youngest son of Arkansas Governor Michael Dale ‘Mike’ Huckabee.”

Both teenagers were fired as a result of this incident. Beyond this, the details cannot be confirmed, but the Snopes report also notes that “anonymous rumors about how the dog was killed claim Frady and Huckabee hanged the dog, slit its throat, and stoned it to death.” They are just that—rumors. But the incident does not speak well of the youngest Huckabee, who definitely killed a dog, and it wasn't because he was really, really hungry.

In Hollywood films, “You killed my dog!” invokes a twisted worldview where the villain is completely depraved. Just in case anyone in the audience might be hoping to give diplomacy a chance because love will find a way, action films from “John Wick” to “Taken 3” make sure to show that the villain not only shot the puppy, he did it on purpose. It happens in real life too: that cop in Ohio who shot a 4-year-old in the leg was aiming for the family dog, but missed.

When pets are killed in the name of survival, we tend to give leeway. Old Yeller was rabid. So was the dog that Atticus shot in "To Kill a Mockingbird." Patriots joke semi-seriously about eating the dogs in "The Patriot," 2000. ("I say we drink the wine, eat the dogs, and use the paper for musket wading!") But the real issue here isn’t whether pre-revolutionary colonists consumed their loyal pets, or whether South Koreans, North Koreans, or the Chinese eat dog but Americans, Canadians, and Europeans eat hotdogs. Why did Huckabee make the comparison between his tax dollars and eating dog in the first place?

For him, they are points on an axis of revulsion. Food is an expression of power over nature exerted over the contents of your plate. Pointing fingers at another country’s culinary habits, especially when the people are powerless and starving, is an easy way to claim cultural superiority via the refinement of your palate. Intramuros, it’s a way to cast aspersions without offering substantive critique, while staking out tribal boundaries defined by food: We dine on cuisine. They eat what they can find. We are civilized. They are savages. Etc.

As an exchange student in a language program in North Korea, Dima Mironenko lived in the country for a semester and is a now Postdoctoral Associate at Yale University, where he is a historian of North Korea specializing on visual culture, film, and media. Mironenko writes in an upset email to me:

“Why is he [Huckabee] singling out North Korea--just to make an unpalatable comparison with Bernie Sanders for dramatic effect? Just for the record, he should really look into entrusting his lab to our South Korean allies or the Chinese. They make our iPhones and Samsung Galaxies and they make much better dog stew, too. Far superior than anything North Koreans would ever cook up, I would imagine (not that they have a reason to--unlike the unfortunate North Korean underdogs, they have plenty of white rice and they are hardly on the brink of starvation).”

So yes, it is true that Korean cuisine has a complicated relationship to "dog" as a culinary ingredient, but it is worth nothing that wartime deprivation also gave the world inventions such as escargot, SPAM, and M & M's. Deprivation tends to expand culinary boundaries, which sometimes stay that way. Using racist half-truths to disparage Sanders' tax plan without confronting the actual tax plan, Huckabee's remarks mostly reminded America that once upon a time, his kid killed a dog.