The shocking truth about the Democratic debate: It changed almost nothing

Hillary did what she needed to do. Bernie stumbled but recovered. The dynamics of the race haven't changed 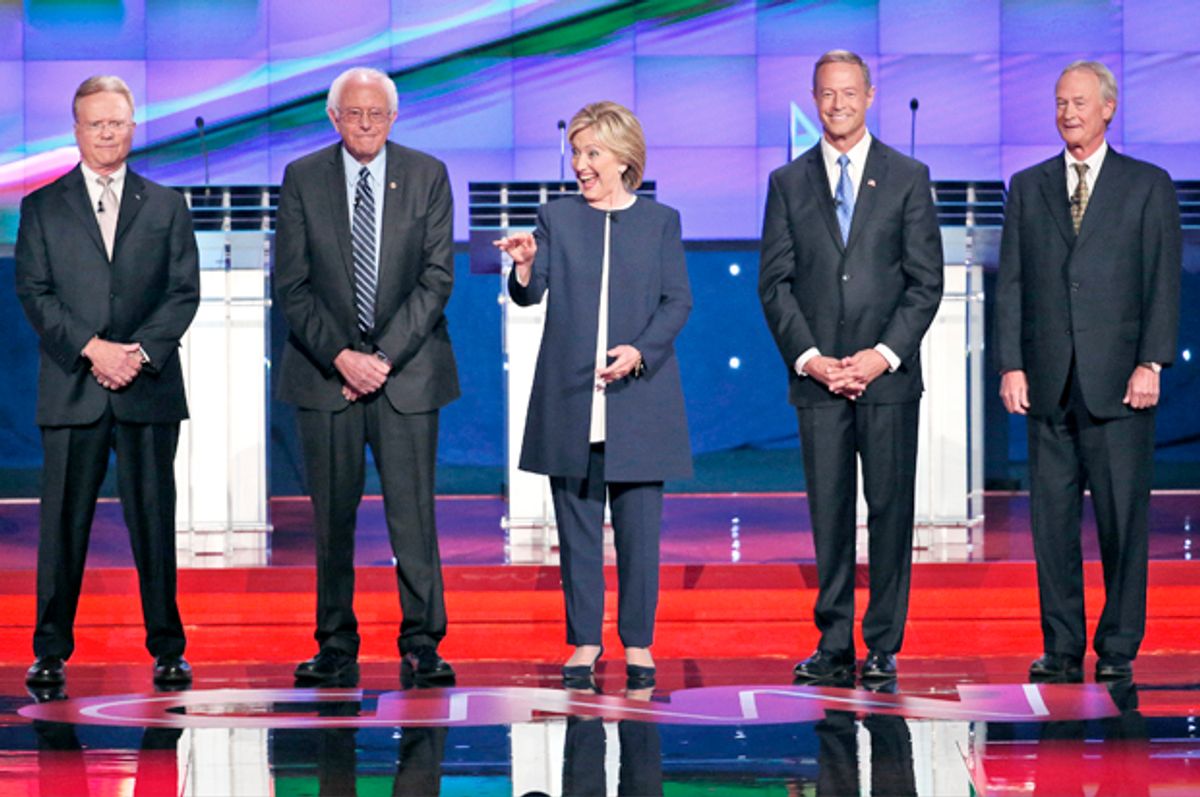 The first Democratic debate proceeded more or less as expected. CNN handled the event the way CNN handles everything – clumsily. It wasn’t terrible, however. Anderson Cooper managed to ask several non-trivial questions, and because there were only five candidates on the stage, we actually heard cogent answers to those questions, unlike in the Republican debates, where the candidates tried to shoehorn their stump speech into every response.

The difference in tone and substance between this debate and the two Republican debates was striking. This was a gathering of adults. Climate change, military adventurism, mass surveillance, campaign finance, economic inequality and institutional corruption – all of these problems were defined, discussed and debated. By contrast, the Republican debates were full of frivolity and distractions, with the majority of time spent on sideshow issues like Planned Parenthood. If nothing else, that says something about the differences between the parties.

This was a strong performance by Clinton. As expected, she pointed to her experience and pragmatism as evidence of her ability to get things done in Washington. At one point, she insisted that she was a “progressive” like the other candidates, but better equipped to succeed in office – a not so subtle jab at Sanders. Clinton was easily the most comfortable and polished candidate on the stage. She wasn’t flawless, but she held her own, which is what a frontrunner has to do. Her worse moment was when she was asked about flip-flopping. “I absorb new information and change my mind,” she said. “I have a range of views, but they’re rooted in my values.” This was a canned answer, and one you’d hear from your garden-variety politician. She then redefined flip-flopping as “learning,” which I assume means she changes her mind when she learns the new poll numbers. Clinton also struggled when asked about her Iraq vote. The other candidates questioned her judgment, and she couldn't explain her blunder - she didn't bother to in any case.

The big question for Clinton was how would she handle the Bernie Sanders challenge. She needed to align herself with Sanders on most of the issues while also drawing critical distinctions. She also had to attack Sanders but avoid alienating the liberal base. I’m not sure she pulled this off, but she never let Sanders win an exchange. She went after him on the issue of offering immunity to gun manufacturers, but it wasn’t over-the-top and it’s not the sort of thing that will irritate progressives. There were some clear differences between her and Sanders, especially on Wall Street and financial corruption, but rhetorically she outmaneuvered Sanders and never let him expose her weaknesses, even though they were apparent to anyone watching. Bottom line: Hillary escaped any real challenges tonight, and probably lowered the likelihood of a Joe Biden entry – and that’s all she needed to do.

I like Bernie Sanders. I think he’d make a great president. He is not a great debater; the format just doesn’t play to his strengths. He had a few moments in the debate, but at times he appeared awkward and out of his element. On the most important question he was asked, the question everyone knew was coming, he dropped the ball. Early on Anderson Cooper asked Sanders if he thought a democratic socialist could win the presidency. Bernie began by making his case in moral terms, arguing how obscene it is that so few have so much at the expense of so many. But then he gave a bumbling answer to Cooper’s follow up question about whether he's a capitalist. Rather than say yes and then explain the reasonable checks he wants to impose on the market, he listed several grievances and failed to say that democratic socialism, as practiced in Europe and elsewhere, is perfectly compatible with free markets.

On the issues that matter most to Democrats, Sanders is the strongest candidate in the race – and it’s not even close. Whether it’s curbing economic inequality or repealing Citizens United or transforming our energy system or ending mass incarceration, Sanders is as credible as anyone. These strengths were apparent at times in the debate, but his tendency to dodge questions was distracting. Bernie’s objective was simple: he needed to look presidential while cutting into Hillary’s lead. I don’t think he accomplished that. Substantively, he was strong as he always is, but debates are about style and tone as much as anything else – and that’s just not what Bernie excels at. He didn’t hurt himself tonight, but he didn’t do much to change the dynamics of the race.

First thing to note is that Martin O’Malley looks like one of those handsome TV dads on a TGIF sitcom. He also likes to stare longingly into the camera when speaking  (like Ted Cruz minus the air of insufferable self-satisfaction). O’Malley’s strategy tonight was to get noticed. Hovering around 1 percent (or worse) in the polls, he needed to take advantage of the airtime. He also needed to go after the two frontrunners, Clinton and Sanders, as that’s his only chance at moving up in the polls. He had a few good moments, particularly at the end, when he emphasized the substantive differences between the Democratic and the Republican debates. But that’s about it. He did no damage to his opponents and he's unlikely to move in the polls. O’Malley’s presence in the race isn’t quite as pointless as Webb and Chafee’s, but if he doesn’t gain any traction after the second debate, he should drop out.

Like his campaign, Webb’s performance in the debate was weird. Webb has an impressive background, and he makes the right noises when talking about the big issues, but he’s been off the radar since he announced his candidacy, and that’s where he'll stay. Webb spent most of the debate whining about speaking time, which only cut further into his speaking time. When he did talk, it was odd and occasionally bizarre. When asked to defend his previous view that affirmative action is “state-sponsored racism,” he mumbled something about white people and diversity programs, but I’ve already forgotten what he was trying to say – I'm pretty sure it wasn't important, though. Webb’s most interesting moment came at the end, when he was asked who his “biggest enemy” was. His answer, and I’m not kidding, was a man who once threw a grenade at him but is now dead because, presumably, Webb killed him. Let that sink in for a minute.

I don’t know why Lincoln Chafee is running for president. It’s an egregious waste of his time and everyone involved in his campaign. Like Webb, Chafee is needlessly sucking up oxygen in this debate. He appears to be a very nice man (I know that because he said multiple times that he has “high ethical standards”), but he’s not a compelling presidential candidate. Since he’s virtually unknown to Democratic voters (he doesn’t even register in the polls), his only goal last night was to have people remember his name this morning. He failed to achieve that goal.