Death and the Bratayley family: An Internet-famous child's death sparks an ugly backlash 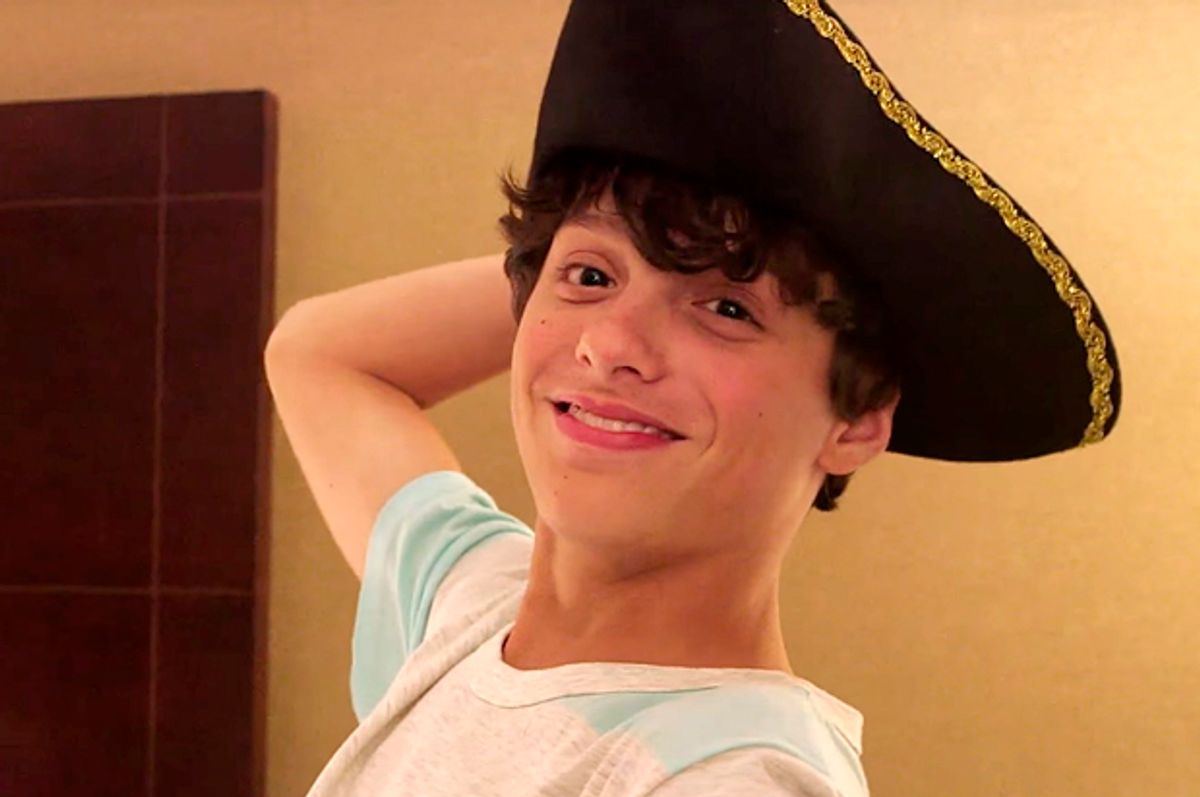 An unsettling saga played itself out across the internet recently concerning the death of a 13-year-old boy named Caleb Logan. The barely-turned teenager was a member of a popular vlogging family show named "Bratayley" (not their real last name), who passed away tragically on October 1. The show returned yesterday after a brief hiatus; the family says they will not grieve on camera.

Family vloggers, for those not familiar with the concept, are a relatively new online phenomenon found mostly on YouTube, that sees real-life families record their daily lives for public consumption. Think of it as a reality show controlled entirely by its subjects, who film, edit and upload the videos of their lives themselves, bringing a level of authenticity to the reality show format seldom seen on television.

More than 1.5 million people are subscribed to the Bratayley channel, following the daily adventures of a mother and father, Katie and Billy, and their three children, Annie, Hayley and Caleb. This online community was rocked when the news hit that the oldest child of the Bratayley family, Caleb Logan, had suddenly passed away. The Bratayley family confirmed the news on their Instagram account, posting a picture of the smiling boy and his younger sister Hayley and informing fans that Caleb had unexpectedly died of natural causes.

The news was so shocking to the family's viewers (many of whom are children) that some simply couldn't bring themselves to accept it had really happened. Speculation was rife that the family's Instagram account had been hacked, and that Caleb was in fact alive and well.

Prompted by this mass level of shock and disbelief, the family released another episode to their YouTube channel, once again confirming Caleb's death via a printed message at the end of the video.

The following day they released a touching tribute video, a collection of clips accumulated throughout the years showcasing Caleb and painting a picture of a normal, happy young boy gradually maturing into a handsome young teenager before his life was cut short. As the truth slowly sank in amongst the Bratayley audience, the initial disbelief quickly grew into a massive outpouring of collective sadness and grief for the loss of a boy many felt they had come to know personally.

And in the wake of this outcry, Caleb's death came to the attention of an entirely different kind of beast — one that, up to this point, the Bratayley channel had not been seriously involved with, despite their considerable online presence and popularity: the media. Soon, the family would become the subject of pages and pages of increasingly invasive and cynical online coverage, much of it focused on the grieving mother.

Counting against them was the general public's lack of knowledge about the daily vlogging phenomenon, which has become hugely popular on YouTube amongst young people and young families, who are more open and engaged with new media (the Bratayley parents are barely in their mid-30s, as are arguably the most famous family vloggers of all, the Shaytards). What most casual observers saw from the outside was a mother choosing to publicize the lives of her children online — unthinkable to some, but an increasingly common occurrence amongst younger people in this age of Facebook, Twitter, Instagram and YouTube. The fact that these videos could also be monetized was another strike against the Bratayley parents, who were being accused of exploiting their children — in life and, even more reprehensibly, in death.

Do these accusations hold up to scrutiny, though? A quick look at the Bratayley channel reveals that it has been running for nearly five years, but the channel's popularity came quite recently. "Bratayley" featured a new video every single day for close to three years before the channel started showing serious growth.

Making money from YouTube vlogs wasn't really a viable career choice in 2010, when the channel started, and even if it was, having to religiously film, edit and upload a video every day for three straight years before they became profitable seems like a woefully inefficient money-making scheme, as money-making schemes go. If the channel had been a relatively new one, as many vlogging channels now are in the wake of YouTube's booming popularity, the family might have been open to such criticism, but it's not. Is it possible that a young stay-at-home mom was simply uploading these videos for her and her children's own amusement, or to share with family and friends, with no expectation of fame or fortune? Early videos show her having fun with filming and editing techniques, creating a mock-trailer for her kids with a dramatic film score and slow-motion shots. Harmless fun.

"Bratayley" did eventually become popular, and were picked up by the professional Disney-owned Maker Studios label, but the core interactions within the family remain essentially the same throughout the channel's history. Their gradual rise in popularity seems to have been a product of the reliability and honesty of their content, nothing more. They eat breakfast. They get haircuts. They play with their dogs. It's hardly salacious stuff.

In the wake of Caleb's death, however, speculation immediately started swirling around how a seemingly healthy 13-year-old boy could die suddenly of natural causes. The family later clarified that an undetected medical condition was behind the tragedy, which does qualify as a natural cause, but reporters and readers alike seemed to be confused by this conflation. The family was itself reeling from Caleb's death and more than likely did not have all the facts themselves yet, but this lack of immediate clarity on the matter was treated as highly suspicious.

So not only had these parents lost their son, but they now found themselves under a particularly harsh and unforgiving media spotlight. The local police even released a statement confirming there was nothing criminal or suspicious about Caleb's passing. But that didn't stop the deluge of questioning articles populated with increasingly cruel comments from drive-by onlookers and passers-by making snap judgments.

While the Bratayley parents shared their kids' lives with their viewers, they set boundaries regarding what they chose to share, never revealing their last name, or even in which state they lived, let alone which suburb. But the media had no such concerns for their privacy — their last name, their family history — all was now fair game. Someone had even tracked down where they lived, and sent a photographer to get a shot of their house, which he or she did, in fading dusk-light.

In an effort to reach out to their heartbroken fans, the Bratayleys announced they would be livestreaming a portion of Caleb's memorial service. This too was met with cynicism from the press — and from the general public, all of whom had already been dutifully misled with regards to the family's character and were seeing this as the final straw.

The memorial itself — or at least the part they allowed fans to see — featured nothing in the way of exploitation. The family is never seen, their messages were not broadcast. Instead a single camera focuses on tiny podium as a friend of the family pays a tearful tribute, Caleb's baseball coaches do their best to say the right things, his cousin delivers an impromptu but heartfelt speech. This wasn't some celebrity event, with the Bratayleys looking to cynically cash in, but a small, sad and somber affair, filled with shell-shocked family and friends doing their best to work through a terrible tragedy.

In fact, it is the stunning level of callousness the Bratayleys have been met with from the outside world seems the most troubling chapter of this story. The sheer irony of the media and the public claiming moral outrage, even as they exhibited stunning cruelty and thoughtlessness over the pain the family was going through, was kind of frightening to behold. And why was the mother the target of virtually all the online vitriol, despite the father of the family being a regular fixture in the videos? "Are these her children or her favorite, attention getting accessory?" asked one commenter. "I do not know why some mothers whore their kids," said another.

Watching the videos, whether from five years ago or today, seems to paint a picture of a mother selflessly devoted to her childrens' lives. That should hardly come as a surprise — after all, this is a role millions of moms happily perform every day — but this mother found herself a relentless target of anger, mistrust and condemnation all the same. There is no greater loss than the loss of a child, but any sympathy and understanding for this grieving parent seemed to fall by the wayside. It raises the question: Are we right to shame mothers simply for sharing photos, or stories, or videos of their children online?

There is clearly a huge audience for the kind of content "Bratayley" provides, and far from offering up the child to the whims of a film and television industry that cares little for the futures or well being of its young stars, this was a process the parents could control themselves. It also created some pretty great opportunities for the family. One of the last things they were able to do with their son Caleb was travel to Australia for a global livestreaming event surrounding the release of the latest batch of Star Wars toys, with Disney no doubt footing the bill. During this trip, they held a meet-up for their fans in a Sydney shopping mall, and thousands of fans turned up to greet them. The Bratayleys had become celebrities halfway across the world, and they'd managed to do it from the comfort of their own home.

While it is undeniably a strange circumstance to the uninitiated, the reality is that the media landscape is changing, every day, at a non-stop pace, creating new social paradigms. People are increasingly turning their lives into their livelihoods, creating both business and opportunity in the process. Unfortunately for the Bratayley family, the tragic family circumstances that saw them become front page news thrust them into an entirely different kind of media spotlight. One they had far less control over, and one far less forgiving and understanding.