A group called Arabian Street Artists was hired to "add authenticity" to the set, so they decided to send a message 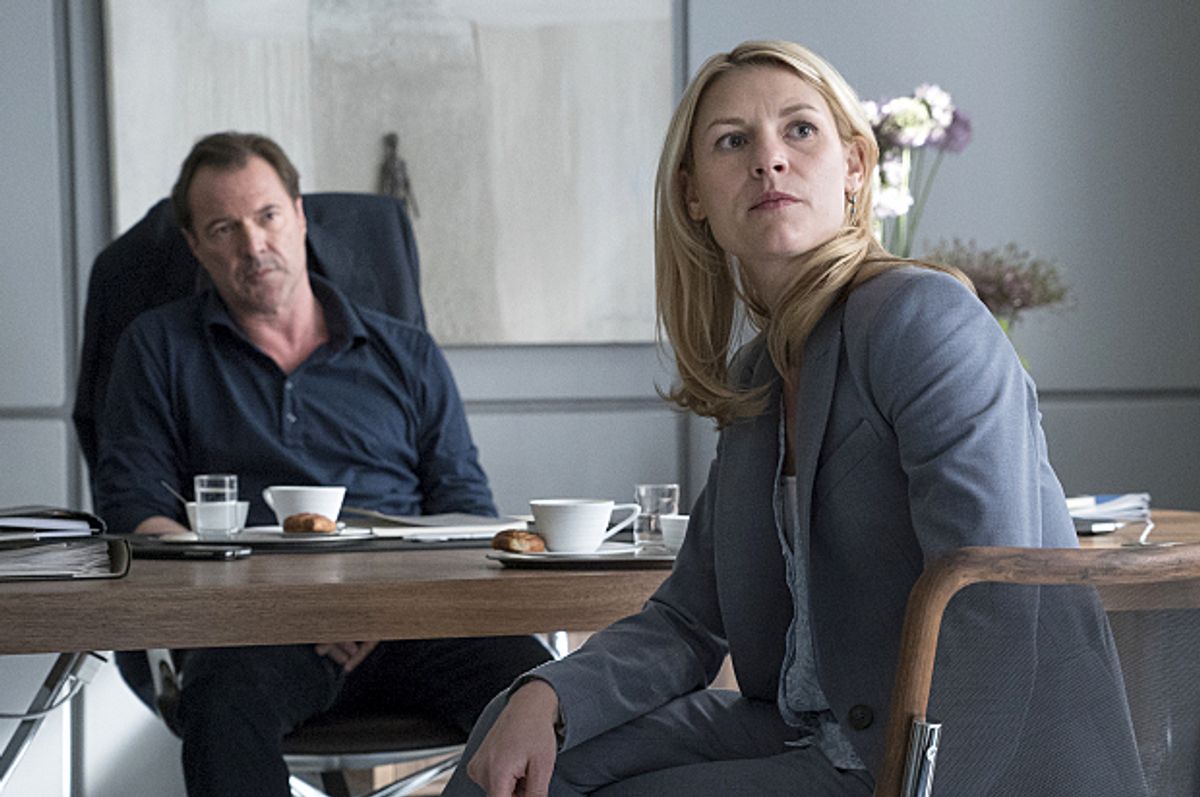 A group of graffiti artists commissioned to “add authenticity” to a refugee camp scene in "Homeland"’s second episode this season decided to add a little color of their own, scrawling “Homeland is racist” in Arabic on one of the walls, along with a number of other subversive slogans. The episode, complete with the offending tags, aired last Sunday.

Heba Amin, Caram Kapp and Stone from the group Arabian Street Artists say they were hired by "Homeland's" set design team to decorate the set (meant to be a Syrian refugee camp on the Lebanese/Syrian border, although it was actually shot in Berlin) with some apolitical slogans. Instead, per a statement on Amin’s website, they opted to “arm ourselves with slogans, with proverbs allowing for critical interpretation, and, if the chance presented itself, blatant criticism directed at the show.” Other slogans included “Homeland is a joke, and it didn’t make us laugh” and “There is no Homeland," “#BlackLivesMatter” and “The show does not represent the views of the artists."

According to the Arabian Street Artists, the “Homeland” set designers were too busy to catch the offending graffiti.

"In their eyes, Arabic script is merely a supplementary visual that completes the horror-fantasy of the Middle East, a poster image dehumanizing an entire region to human-less figures in black burkas and moreover, this season, to refugees,” the group writes. "The show has thus created a chain of causality with Arabs at its beginning and as its outcome — their own victims and executioners at the same time. As was briefly written on the walls of a make-believe Syrian refugee camp in a former Futterphosphatfabrik (animal feed plant) in the outskirts of Berlin, the situation is not to be trusted.”

While some critics have actually praised the show’s politics, “Homeland” has long garnered criticism for offensive Arab stereotypes, with the Washington Post’s Laura Durkay arguing that the shows bigotry and oversimplified worldview has dangerous real world ramifications. As she writes, "It’s easy to argue that Homeland is just a TV show, a thriller that naturally demands diabolical villains and high stakes. But these same stereotypes about Arabs and Muslims are used politically to justify actions in the real world—U.S. wars, covert operations and drone strikes; CIA detention and torture; racist policing, domestic surveillance and militarized borders. In this context, Homeland is not just mindless entertainment, but a device that perpetuates racist ideas that have real consequences for ordinary people’s lives.”

The Arabian Street Artists echo this view in their statement:

"The series has garnered the reputation of being the most bigoted show on television for its inaccurate, undifferentiated and highly biased depiction of Arabs, Pakistanis, and Afghans, as well as its gross misrepresentations of the cities of Beirut, Islamabad — and the so-called Muslim world in general,” they write. "For four seasons, and entering its fifth, “Homeland” has maintained the dichotomy of the photogenic, mainly white, mostly American protector versus the evil and backwards Muslim threat. The Washington Post reacts to the racist horror of their season four promotional poster by describing it as 'white Red Riding Hood lost in a forest of faceless Muslim wolves.' In this forest, Red Riding Hood is permitted to display many shades of grey – bribery, drone strikes, torture, and covert assassination — to achieve her targets. She points her weapon of choice at the monochrome bad guys, who do all the things that the good guys do, but with nefarious intent."

Speaking to Deadline, showrunner Alex Gansa expressed admiration for their gutsiness. As he put it: “We wish we’d caught these images before they made it to air. However, as Homeland always strives to be subversive in its own right and a stimulus for conversation, we can’t help but admire this act of artistic sabotage.”

See some of the graffiti below: