The party's disastrous bids for president could change the complexion of the whole country. Just look at Louisiana 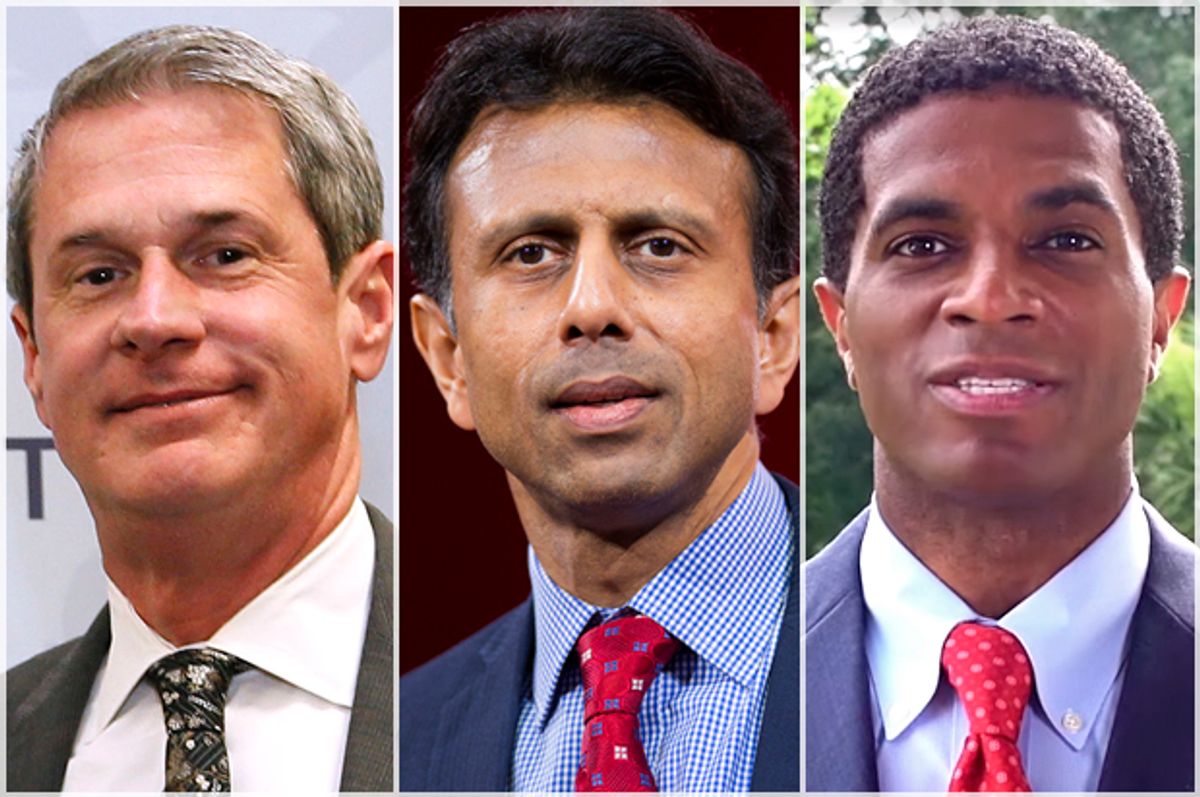 The GOP is in serious trouble as a national political party. Demographic shifts, a crisis-driven conservative media and an ungovernable congressional caucus have tarnished the Republican brand. Increasingly, the GOP’s base is confined to the south and to pockets of rural America. But even in a conservative state like Louisiana, Republicans are being challenged by Democratic candidates. While it’s unlikely that Louisiana becomes a blue state anytime soon, there are some compelling indicators that the political winds are shifting.

First, you have the emerging gubernatorial race, which is far more competitive than many thought possible. The Democratic candidate, John Bel Edwards, is now leading the former Republican frontrunner, David Vitter, by a substantial margin. “

It’s almost laboratory conditions in Louisiana for Democrats,” James Carville told Salon in an exclusive interview. “You have a horrifically unpopular incumbent governor [Bobby Jindal] and the likely Republican survivor [Vitter] is one of the most flawed candidates in American politics.”

Against the backdrop of Jindal’s tenure (which began with an $865 million surplus and ended with a $1.6 billion budget deficit) and the GOP’s broader image problem, things set up perfectly for Louisiana Democrats.

In addition to the gubernatorial race, there is also the campaign for Louisiana Secretary of State. The Democratic candidate is Chris Tyson, a young progressive who many, including Carville, believe has a bright future in national politics – although Tyson himself insists his “immediate concern is winning this election.” A Baton Rouge native, Tyson would be the first African-American elected statewide in Louisiana since Reconstruction. As yet there is very little polling data, but that which exists shows the race extremely tight.

That the race is close at all is remarkable. Tyson’s Republican opponent, incumbent Tom Schedler, was thought unbeatable by most observers of Louisiana’s politics, but that’s no longer the case.

Carville, who follows Louisiana politics as closely as anyone, expected a competitive race. The Republican Party is reeling nationally, he noted, and “Chris is a once in a generation candidate…He’s a progressive Democrat in Louisiana, but he’s also the son of a federal judge, a former small business owner, a law professor, a community activist and a graduate of Howard, Harvard and Georgetown University.” Tyson may not win this election, Carville added, but “it’ll be interesting to watch because it’s a good barometer of what’s possible in this political climate…The deck couldn’t be stacked more in the Democrats' favor.”

The nature of the Secretary of State position is also benefiting Tyson.

“I’ve had a lot of Republicans contribute to my campaign,” Tyson told me, “partly because I’m able to cross traditional political distinctions and because the job itself is mostly apolitical.” The job may be apolitical, but it’s not inconsequential. The Secretary of State enforces elections laws, which are disputed nationally due to voter suppression efforts.

Tyson has made automatic voter registration a cardinal issue in his campaign, which aligns him with progressives around the country, who see it as a bulwark against voter suppression. Tyson’s opponent has exploited his support of automatic registration in predictably sordid ways. As the Times Picayune columnist Bob Mann reported, Schedler featured a column on his website that explicitly linked race to automatic voter registration. “There is no particular reason why a black Democrat [emphasis mine] would mount a serious challenge to a Republican incumbent in a race like the one for Secretary of State,” the un-bylined article read, “particularly when Tyson decides he wants to run on automatic voter registration, which is about as open an invitation to fraud and abuse as you can imagine.” Schedler’s willingness to indulge in this sort of race-baiting is a sign of desperation, especially in a down ballot race like this.

Political commentators in Louisiana remain skeptical of Tyson’s chances, and for good reasons. The incumbency advantage is real, and this is a race that receives comparatively little coverage in local media. But Tyson offers progressive Democrats in a traditionally red state a rare chance to win an important statewide office.

“Louisiana Democrats always complain about not having a high quality candidate,” Carville said. “Well, here he is. Now stop whining and support him!”

Win or lose, the viability of statewide Democratic candidates like Tyson, Edwards and Kip Holden, who is the current frontrunner in the race for Lieutenant Governor, says something about the political landscape in Louisiana and in the country more generally. The Republican brand, even in the Deep South, is badly damaged; this is particularly true in Louisiana. We have a lame-duck Republican governor who personifies the worst pathologies of contemporary conservatism – the religious demagoguery, the fiscal recklessness, the obstructionism. In so many ways, Jindal exemplifies the new GOP – and it’s fitting that his failures are creating more favorable conditions for red state Democrats like Tyson and Edwards.