After being told for years that "political correctness" oppresses, conservatives aren't going to lie for the GOP 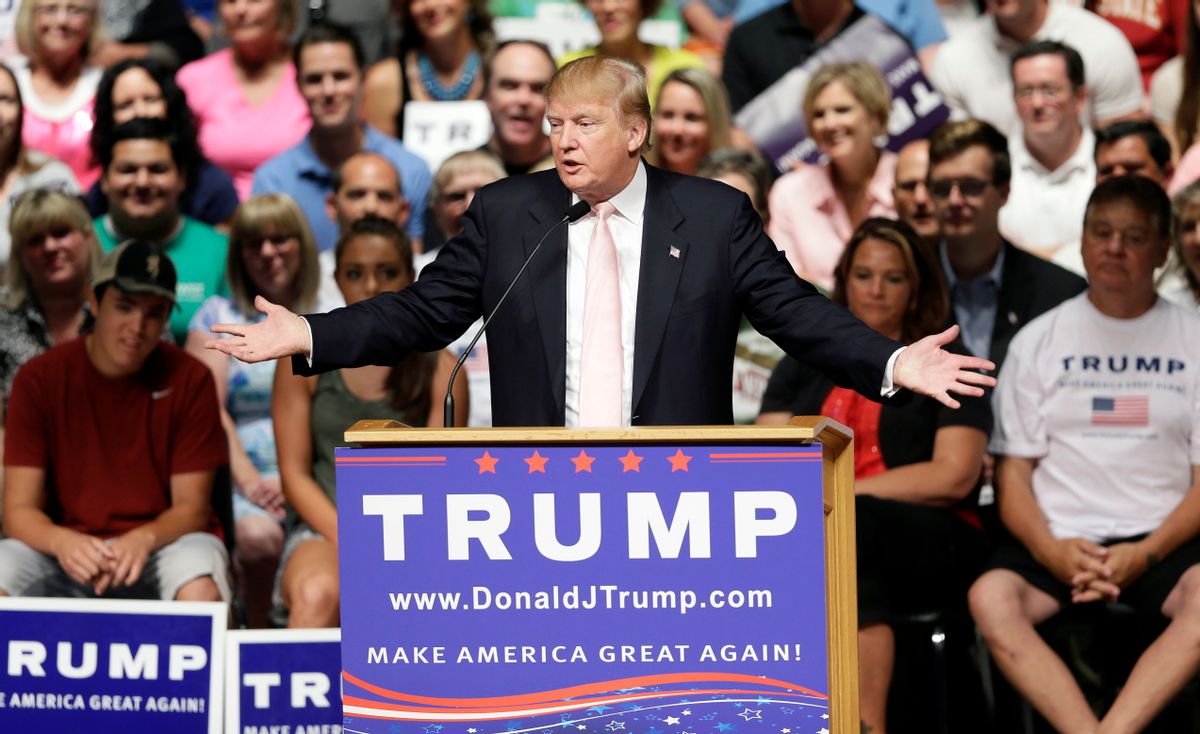 FILE - In this July 25, 2015, photo, Republican presidential candidate Donald Trump speaks at a rally and picnic in Oskaloosa, Iowa. The prospect that Trump might eventually leave the primaries and run for president on his own has started to cast a shadow on the race, reviving memories of Ross Perot, Ralph Nader and the chills their third-party campaigns gave to Republicans and Democrats in turn. (AP Photo/Charlie Neibergall) (AP)
--

If you want to know why congressional Republicans are falling apart, look no further the latest comments from Rep. Richard Hanna, a Republican from New York, about the endless Benghazi hearings. Speaking to radio host Bill Keller, Hanna conceded that Rep. Kevin McCarthy was speaking the truth when he admitted that the hearings are about driving down Hillary Clinton's poll numbers, despite all the disingenuous posturing about truth and justice that is generally used to justify what has now gone on longer than the Watergate hearings while producing nothing of importance.

"This may not be politically correct, but I think that there was a big part of this investigation that was designed to go after people and an individual, Hillary Clinton," Hanna said.

It was a strange choice of words. "Politically correct" is a phrase conservatives use to demonize liberal efforts to stigmatize open expressions of bigotry. "It may not be politically correct to say so" is the phrase you usually hear right before someone says something overtly racist, sexist, or homophobic. It's not usually used to refer to Republican efforts to hide the partisan nature of the fake scandals they generate to tarnish the reputations of Democrats and liberals.

But the use of the phrase was nonetheless telling. For decades now, Republicans have benefitted by nurturing the conservative sense of victimhood, telling conservatives that, if it weren't for those liberals and their political correctness, they could let loose with whatever vile opinion they secretly hold in their hearts regarding the proper place of women, LGBT folks, and people of color. After being told for that long that being told to hold your tongue is the worst possible oppression that any human being has ever faced, it makes sense that some conservatives are going to start chafing under Republican demands for self-censorship.

And let's be honest: The Republican demands for self-censorship are far more stringent than anything liberals ask of them. As I pointed out last week, hiding their true motivations is the rule, not the exception, when it comes to the right. On issues ranging from voter ID laws to attacks on Planned Parenthood to the Benghazi posturing, conservatives will give you any reason under the sun for their views, except the real one.

Granted, a lot of these demands for self-censorship placed on conservatives from the right are put there with liberals in mind. They know full well that if they say, for instance, that hostility to abortion really is about female sexuality and not "life", then liberals will seize on that. Same story with voter ID laws. Admitting that it's about keeping black people from voting would cost them political points and may even undermine the legal defenses in court. These admissions that the Benghazi hearings are partisan are being trumpeted by the Clinton campaign, as well. But while it's liberal ears they are trying to keep the truth out of, ultimately the demands to hold your tongue and say something other than what's actually in your heart are coming from Republicans. And increasingly, conservatives are rebelling, eager to say what they really think, even if it hurts them politically.

Donald Trump's candidacy is by far the best example of this. He loves to decry "political correctness", but the blunt fact of the matter is that the people who want him to shut his big mouth are not liberals at all, but Republicans. The party elite know that every time he starts hollering about Mexicans or says something nasty about women, it makes the rest of them look bad. But a lot of the conservative hoi polloi don't care anymore. They want to sing their odious views for whoever will listen, and they are increasingly seeing Republican leadership as the enemy for trying to stop them.

But you're seeing this kind of leakage everywhere, as conservatives, fed up with their own leaders hinting that they keep it in, are letting 'er rip. Take, for instance, Monica Miller of Citizens for a Pro-Life Society, who was one of the major organizers for the past weekend's nationwide protests of Planned Parenthood. The official story Republicans are pushing is that the attacks on Planned Parenthood are about "life," but Miller broke with the party line and let the truth slip out on a Catholic radio program. "I say even if Planned Parenthood didn’t perform one single abortion, just the mere fact that its sexual ethic is corrupted means right there, should be the reason right there, that they should not receive any federal money," Miller argued. "The kind of sexual ethic that Planned Parenthood promotes is sex for recreation, sex for mere pleasure."

It's clear why Republican leadership might not want people to hear that the anti-choice movement, at its core, is about trying to end the practice of sex for pleasure. But this is the Donald Trump screw-it era, so it's no surprise to see people like Miller let the truth leak out. It must feel like a real moment of unburdening yourself.

A similar thing is going on with race, as white supremacists are increasingly pushing back against conservative efforts to silence them. One especially telling example from this week: The former head of the Arizona Republican Party, Randy Pullen, took to Twitter to argue that the government should "take guns away from blacks as they are the main killers."

It's definitely not liberals who want people like Pullen and Miller---and Donald Trump---to shut up. Liberals, by and large, can't wait for some conservative to say something outrageous so they can all share it on Facebook. No, the pressure to be "politically correct" comes mostly from Republicans, and so the nose-thumbing is increasingly aimed in their direction.

Compared to the radical Tea Party/Freedom Caucus/poo-flingers that increasingly make up the ranks of congressional Republicans, Hanna is a relative moderate. But his use of "politically correct" to describe the pressure coming from party leaders to join up with the disingenuous posturing and suppress his real opinion fits in the larger overall trend on the right. Increasingly, Republican politics isn't about winning elections or getting things done, but seen as a vehicle for individual self-expression. That's one reason Trump is winning in the polls. It's also why the House can't elect a Speaker, as every nominee tossed up is decried for being too politically correct. When you tell your people for decades that they're being oppressed whenever they're told to be nice and get along with others, don't be surprised if that destroys your ability to do the basic work of organizing a political party.