Hillary Clinton often boasts about helping children, but she betrayed them as First Lady

During the debate, Clinton touted her years at the Children's Defense Fund. Here's the truth she didn't talk about 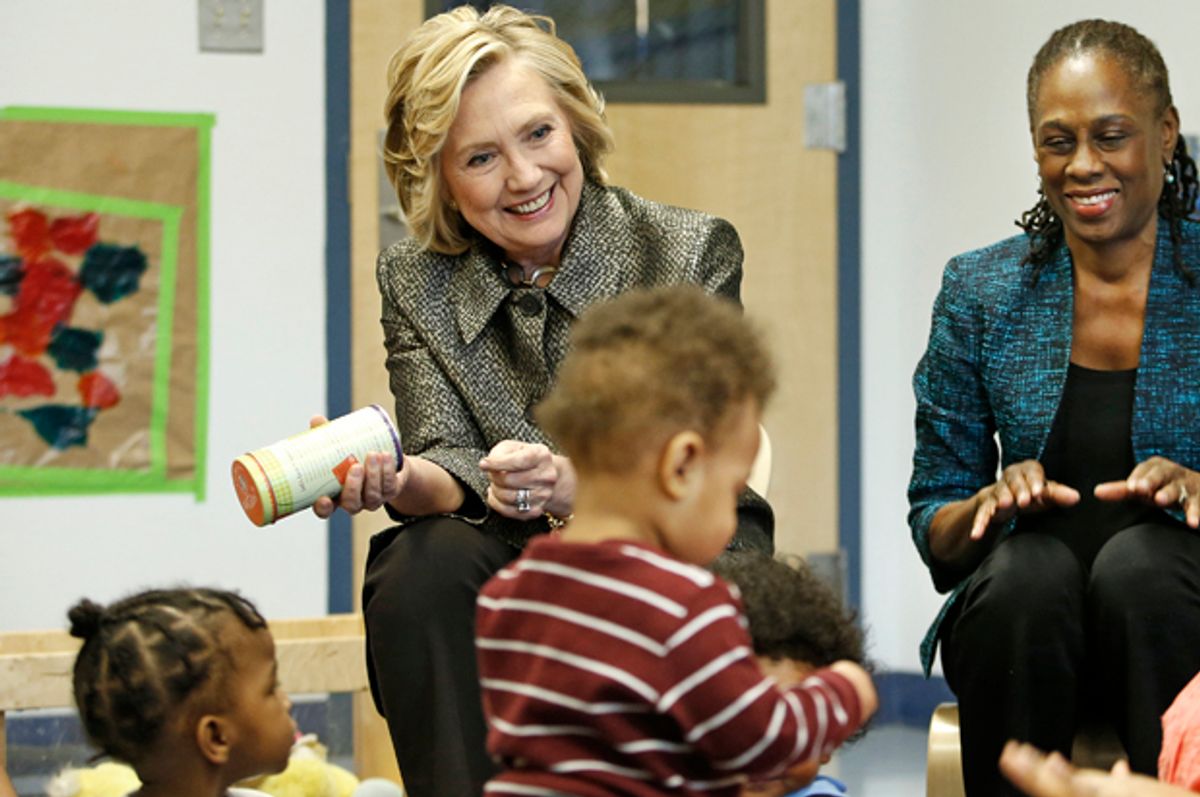 Politicians are often said to be skilled in the art of talking out of both sides of their mouths. This was exemplified in the first 2015 Democratic presidential debate, on the evening of Oct. 13. When asked which enemy he was most proud of, former Maryland Governor Martin O'Malley boldly declared "the NRA."

The problem is O'Malley took $40,000 from the NRA in 2012, according to disclosures obtained by The Intercept.

Yet O'Malley is not the only candidate who says one thing and does another.

"I don't take a back seat to anyone when it comes to progressive experience and progressive commitment," Hillary Clinton insisted in the debate. "You know, when I left law school, my first job was with the Children's Defense Fund, and for all the years since, I have been focused on how we’re going to un-stack the deck, and how we're gonna make it possible for more people to have the experience I had."

This is true -- Clinton not only worked with Children's Defense Fund (CDF), a non-profit advocacy organization that seeks to help American youth; she served as the head of its board.

Later in the debate -- amid her hawkish rhetoric -- Clinton twice more mentioned her work with CDF, wielding it as an example of her purportedly progressive policies.

The problem with Clinton's claims, however, is that she betrayed children as First Lady. Under the guise of welfare reform, the Clinton administration worked with Republicans to gut social services, ignoring their own senior officials' warnings that, by doing so, they would be plunging over a million children into poverty.

Bill Clinton ran in 1992 on the campaign promise to "end welfare as we know it." In 1996, he -- with the wholehearted support of Hillary -- succeeded, passing the Personal Responsibility and Work Opportunity Act (PRWORA). PRWORA was based on legislation first proposed by Republican Speaker of the House Newt Gingrich. The act was opposed by the left-wing of the Democratic Party, but the Clinton administration joined hands with Republicans and conservative Democrats to push it through.

As part of PRWORA, the Clinton administration axed the Aid to Families with Dependent Children federal assistance program, which had been created 61 years before by the Social Security Act, in the New Deal. They replaced it with the Temporary Assistance for Needy Families (TANF) program, which was drastically weaker and -- as the name stresses -- temporary.

Hillary, as First Lady, advocated strongly for the restructuring of welfare. Her former co-workers at CDF, on the other hand, were infuriated. CDF founder and President Marian Wright Edelman declared that President Clinton's "signature on this pernicious bill makes a mockery of his pledge not to hurt children."

"Hillary Clinton is an old friend, but they are not friends in politics," the CDF president told Democracy Now in a 2007 interview. At the time, CDF "profoundly disagreed with the forms of the welfare reform bill, and we said so," Marian Wright Edelman explained.

Three senior officials on welfare policy resigned from the Clinton administration in response to Bill and Hillary's scrapping of welfare. Peter Edelman, a legal scholar who at the time served as an assistant secretary at the Department of Health and Human Services, told The New York Times, "I have devoted the last 30-plus years to doing whatever I could to help in reducing poverty in America. I believe the recently enacted welfare bill goes in the opposite direction."

Wendell Primus, another high-ranking official in the department, quit in protest as well. A scientific study he had overseen showed that, because of PRWORA, more than a million children would fall into poverty. Peter Edelman disclosed that this study was "personally handed" to President Clinton, but was ignored. To remain in the Clinton administration then, Primus maintained, "would be to disown all the analysis my office has produced regarding the impact of the bill."

Peter Edelman, a longtime friend of the Clintons, subsequently published an article in The Atlantic in 1997 titled "The Worst Thing Bill Clinton Has Done." In the piece, he warned that "the bill that President Clinton signed is not welfare reform. It does not promote work effectively, and it will hurt millions of poor children by the time it is fully implemented."

The Clintons' gutting of welfare, Peter Edelman noted, "bars hundreds of thousands of legal immigrants—including many who have worked in the United States for decades and paid a considerable amount in Social Security and income taxes—from receiving disability and old-age assistance and food stamps, and reduces food-stamp assistance for millions of children in working families."

He called the Clinton anti-welfare policy "a truly radical proposal" -- in a negative sense. "This was the major milestone in the political race to the bottom," Peter Edelman wrote (emphasis his).

The U.S. Left was infuriated at what the Clinton administration had done. Journalist and social and economic justice activist Barbara Ehrenreich remarked that it was "hard to miss the racism and misogyny that helped motivate welfare reform." The Clintons had advanced the racist stereotype of the "Welfare Queen" in their campaign against federal assistance.

In his book A Political History of the American Welfare System, scholar Brendon O'Connor wrote that "PRWORA supporters whom I interviewed, particularly the Republicans, ... often recycled the arguments of the anti-welfare conservative intellectuals when they were discussing the liberal system." Meanwhile, those who opposed PRWORA "questioned the cruelty to children the new act could inflict."

As recently as 2008, Hillary characterized the "welfare reform" she fervently campaigned for as First Lady as a success. She still maintains that welfare "should not be considered an anti-poverty program. It simply did not work."

Those on the receiving end of the Clintons' policies strongly disagree, however. In 2014, Lillie Harden, the mother who was exploited as the poster child for President Clinton's campaign to "end welfare as we know it," died. In the last decade of her life, encumbered with hardship, Harden had struggled with health problems, but could not afford the medication she needed -- which she had gotten when she was on welfare. "It didn't pay off in the end," Harden lamented.

"We've got to do more about the lives of these children," Clinton proclaimed in the first Democratic presidential debate. Twice she exhorted viewers, "we need to be committed to making it possible for every child to live up to his or her God-given potential." Yet Hillary Clinton has failed to live up to her own commitments.

Almost 20 years after the Clintons passed PRWORA, "when many people are pronouncing welfare reform a great success, we've got growing child poverty," stated CDF President Marian Wright Edelman in 2007. "We have more children in poverty and in extreme poverty over the last six years than we had earlier in the year."

Enrollment in TANF, the new, much weaker program established by the Clintons, decreased by 58 percent between 1995 and 2010. In that same time, the number of poor families with children increased by 17 percent.

Examples like these demonstrate how, when it comes to speaking out of both sides of the mouth, Hillary Clinton is a virtuosa. Child welfare is not the only such example of hypocrisy. In her strong support for her husband's "tough on crime" policies, Hillary helped create the system of mass incarceration that she rails against today. Moreover, in 2007, as a New York senator, she opposed legislation that would help undocumented immigrants -- whom Hillary now insists she will assist.

In a 1992 academic article, scholars explained that, on U.S. child policy, Clinton's "legal approach can best be described as conservative." The legal experts revealed she puts an "emphasis on strict legal standards and limited state intervention" and "rejects broad intervention into family life as would be seen as commonplace in Western European countries."

Today, over two decades later, Hillary Clinton's policies remain conservative. She continues to sit at the right-wing of the Democratic Party. Clinton may have claimed in the debate that she is a progressive, but her actions have long contradicted her words.