Ben Carson, a grifter on the wingnut welfare circuit: How he just gave away the act

Wingnuts hate government, love the market. So why are they surprised when their heroes pick riches over governing? 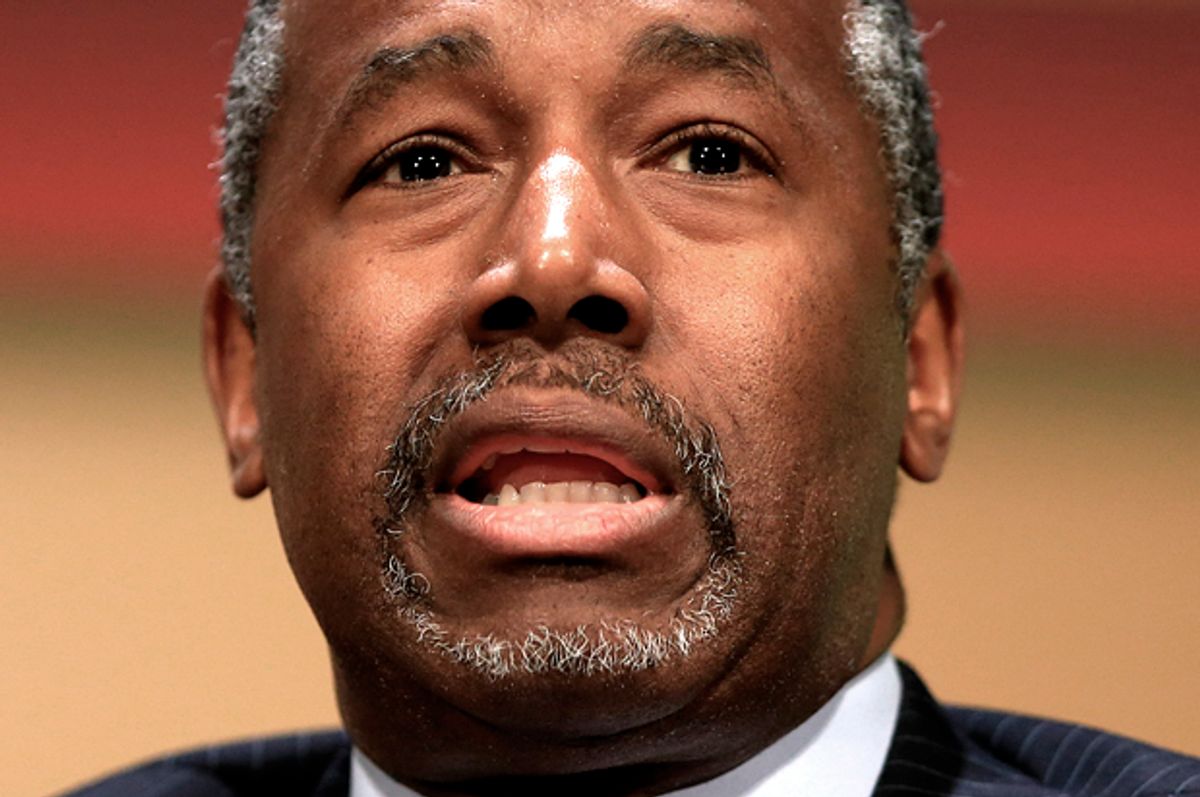 The unorthodox presidential campaign of Ben Carson took another twist late Wednesday when the retired neurosurgeon announced he would temporarily suspend his campaign. Unfortunately he’s not doing this for the usual reasons one suspends a campaign – cratering poll numbers, a juicy sexual-harassment scandal, a sudden onset of sanity. No, Carson will instead step off the trail to spend a couple of weeks on a book tour supporting "A More Perfect Union," his just-released guide to interpreting the Constitution for people who think Ben Carson ever knows what he’s talking about.

The reaction on the right has been one of utter befuddlement. A candidate does not take time off from the Bataan Death March that is a modern presidential campaign just to read a few pages of his book to a bunch of elderly wingnuts in the back corner of the Hackensack Barnes and Noble. Especially not when he is in second place in the polls, nearly even with the frontrunner and far ahead of the rest of the pack. And he got there with hardly doing any traditional campaigning. Why stop now?

The shock would be a lot easier to take seriously if a) Ben Carson had not already shown himself to have a grasp of reality best described as “tenuous” and b) if there was not a whole conservative ecosystem of publishers, TV and radio producers, think tanks, con artists and assorted other flimflammers all dedicated to making conservative politicians and media figures rich(er) through a combination of generous funding by wealthy benefactors and sucking money out of the pockets of rubes inclined to buy mail-order survival seeds as a hedge against the imminent Communist takeover of America, all because Fox News told them Obama is coming to steal their guns. It’s a perpetual motion machine of grift. Ben Carson is simply cashing in.

Historian Rick Perlstein traced the history of the right wing’s money-making cons in a 2012 essay in The Baffler. After describing the product pitches he was inundated with by conservative publications after he subscribed to their email lists, Perlstein said this:

[T]his stuff is as important to understanding the conservative ascendancy as are the internecine organizational and ideological struggles that make up its official history—if not, indeed, more so. The strategic alliance of snake-oil vendors and conservative true believers points up evidence of another successful long march, of tactics designed to corral fleeceable multitudes all in one place—and the formation of a cast of mind that makes it hard for either them or us to discern where the ideological con ended and the money con began.

One need only look at the Republican candidates from the last two election cycles to see the cycle of grift at work. There was Ron Paul and his newsletters promising to show you how to put all your money in gold in advance of a worldwide economic collapse that never seems to arrive. (But please don’t cancel that subscription!) There was Mike Huckabee, recently busted for hawking a cinnamon-based cure for diabetes to the elderly diabetes-prone conservative base, using his 2008 campaign to land a talk show on the Fox News channel. There was the grandmamma of them all, Sarah Palin, who famously quit the governor’s mansion in Alaska after running for vice president in 2008 because she could make way more money babbling on Fox News occasionally, selling books defending that oft-endangered celebration of Christmas, and starring in reality shows.

No matter how many times it happens, I never fail to be gobsmacked by how gobsmacked Republicans are when one of their own presidential candidates turns out to be a huckster shilling a get-rich-quick scheme or a miracle cure for diabetes or a fanciful interpretation of the Constitution that gives Cleon Skousen’s corpse a stiffy. It is as if conservative media figures and political operatives do not read their own publications.

Aside from showing up at the debates and sitting for interviews, Carson has done very little campaigning. He has not had to put forth much in the way of serious, detailed policy proposals, and he is still polling around 20 percent (the next-closest candidate in most polls, Marco Rubio, is hovering around 10 percent).  Why shouldn’t he take advantage of his newly-raised media profile to sell his book and maybe dredge up some interest in his entire literary back catalog? The more books he sells, the more he can raise his speaking fees after the campaign by promoting himself as a best-selling author. The more speeches he gets highly paid to give, the more talk radio and Fox News see him as a valuable commodity to bring on as a pundit or even to give him his own show. Sure, he is already wealthy from his successful career as a neurosurgeon, but isn’t the essence of the capitalist system that conservatives revere to make as much money as you possibly can?

Conservatives are supposed to hate the government and love the free market. Then they turn on their candidates who prize enriching themselves over actual governing. The irony is significantly more delicious than a barrel full of survival seeds.