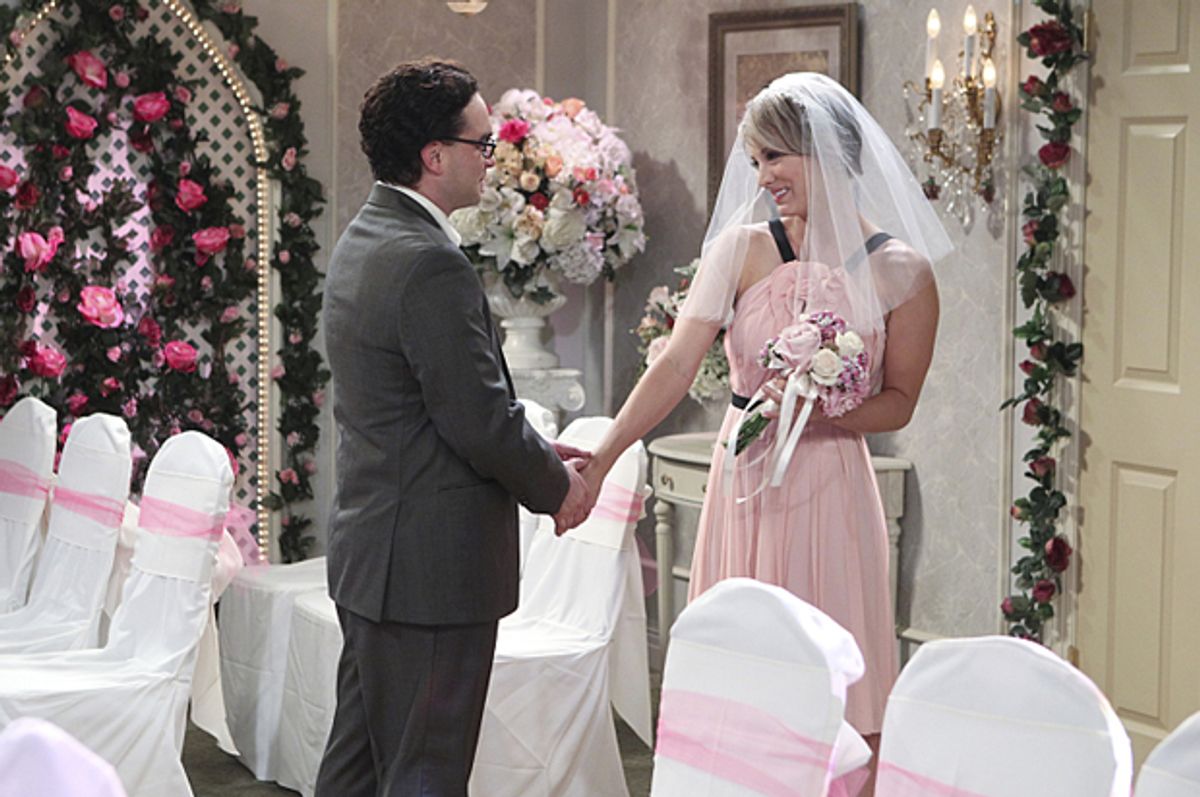 When the bizarre fantasy of network sitcom life bleeds over into reality, fans lose their minds. Can you imagine the collective protracted pre-Twitter freak-out if, in 1997, Jennifer Aniston had run away with David Schwimmer?

This is the laziest ‘shipper’s victory, after all — the stammering Nice Guy™ who’s right in front of the Hot Girl’s face but she can’t see him actually pulling it off with the Hot Girl in real life, even as they engage in the will-they-or-won’t-they (oh, of course they will!) sexual tension dance in the entirely fictional universe which they inhabit on-screen.

When “The Big Bang Theory” star Kaley Cuoco-Sweeting revealed in 2010 (when she was just Kaley Cuoco) that she and co-star Johnny Galecki had secretly dated for two years (the show premiered on CBS in 2007) before breaking up in 2009 — and staying good friends, of course! — the vindication must have been so sweet to their fans. Leonard! And Penny! Together in Real Life!

And yet contentment, so elusive. People who believe the incredibly grating Leonard (Galecki) should, by right of living across the hall and occasionally listening to her problems, end up marrying the perky blonde Penny (Cuoco-Sweeting) — as they just did, in a cliffhanger-resolving season 9 premiere — were likely devastated that they never had a chance to revel in the real-life pairing of Cuoco and Galecki, who are about 11 years apart in age and who may or may not have anything in common besides their work.

The entire premise of “The Big Bang Theory” only works if you believe that university research scientists are significantly more socially awkward and inappropriate than, say, writers, and if you believe that I have a particle accelerator in my basement to sell you. All of the actual nerds I know hate “The Big Bang Theory,” but oh, who cares? This is a network buddy sitcom and we are here for the bad sex puns, Gandalf jokes and Amy Farrah Fucking Fowler.

But there is something sneakily believable about imagining Galecki — who has had a successful TV and film career practically his entire life so let’s be real about who we’re talking about, he’s not actually some meek lab rat — is the underdog, as we’ve been watching him inhabit that role since Nice Guy David first tossed his sensitive hair at Darlene on “Roseanne.” Johnny and Kaley playing out the roles of Leonard and Penny in real life, together at last, promised a certain kind of creepy victory for the friend-zoned unrequited crush of rom-com lore that feeds some pretty toxic male entitlement cultural tropes. (Can we please retire this ugly cliché now?)

"Still have hope that the Penny to my Leonard is hiding somewhere in my new building ..." muses one fan on Twitter. "I feel so guilty over hoping kaley cuoco and ryan are getting divorced bc PENNY LOVES LEONARD," moans another. The show itself, of course, pushes these buttons deliberately.

But then Kaley Cuoco-Definitely-Not-a-Feminist started dating a professional tennis player. Of course she did, amirite? And then she married him, added his last name her quite bankable own, and even cooked dinner for him five nights a week because “it makes me feel like a housewife; I love that.” I know next to nothing about the character and temperament of Ryan Sweeting, professional tennis player, and I’m likely not alone. But I wouldn’t be surprised if there were a lot of seething sitcom fans who thought of him as that typical jock asshole who Penny was naturally — women, right?! — drawn to instead of the Nice Guy™ who was right there on set the whole time.

Cuoco-Sweeting just announced her divorce after only 21 months. Perhaps all of that built-up wish-fulfillment then kicked into overdrive, because the affair rumors started almost immediately. And now Cuoco-Sweeting and Galecki have had to take to Instagram! to squash barfable rumors that Our Leonard Stole Our Penny From the Jock, and if that’s not an argument against office romances no matter where you work, I don’t know what is.

“So sorry to disappoint, but no home wreckers or secret flings going on here,” her Instagram trumpeted in the caption of a photo of Cuoco-Sweeting and Galecki fist-bumping as “best of buds” are wont to do when millions of weirdos insist you must be a cheating asshole in your downtime:

So sorry to disappoint , but no home wreckers or secret flings going on here. Me and @sanctionedjohnnygalecki are just the best of buds- Leonard and Penny will just have to suffice!!! 💗💗❤️❤️

Galecki adds “no pregnancies” to the list of rumors he and Kaley must debunk on his own post. Wow. And yet, there are the creeper fans, insisting, "I believe you two are meant for each other friends or more than friends :)"

Tabloids stoke-slash-create-out-of-thin-air these rumors, but the stories wouldn’t get any traction if they weren’t playing into some damaging collective cultural fantasies about women and men and who deserves happiness and how and why. Kaley Cuoco-Sweeting was in a relationship with her colleague quite a number of years ago, and says now they are just co-workers and friends, and we should take her at her word on that. She married another man less than two years ago with, one must presume, all of the hope for a bright and long future together, and now, because she’s the kind of celebrity who commands $1 million per episode of her long-running network sitcom, she has to plaster on a good-sport smile and sit for a stupid Instagram shoot with her ex-boyfriend, in between mourning the end of her marriage and taking care of the endless pain in the ass details, personal and financial, that come with a divorce, not to mention going to work every day like the professional she is.

The romantic lives of Penny and Leonard belong to the fans, but the private lives of Kaley and Johnny — not to mention Ryan, who presumably is a real human person, too — only belong to themselves. It shouldn’t matter if one of Cuoco’s exes plays the role of a desperate nerd on TV and the other plays the role of the confident alpha male on the court — her divorce isn’t a bonus reel, and it shouldn't be an opportunity for overzealous fans to project a bunch of their own emotional baggage (still not over Andie ditching Duckie for Blaine, are we?) onto perfect strangers. The Nice Guy™ we've imagined Johnny Galecki to be (poor guy!) isn't inherently more deserving than the professional tennis player is, and a woman — even a beautiful, accomplished, talented, wealthy woman like Kaley Cuoco-Sweeting — is a human being, not a prize to be won.