PUMAs, a bitter group of Clinton supporters, hurt her reputation. Will some Sanders supporters do the same to him? 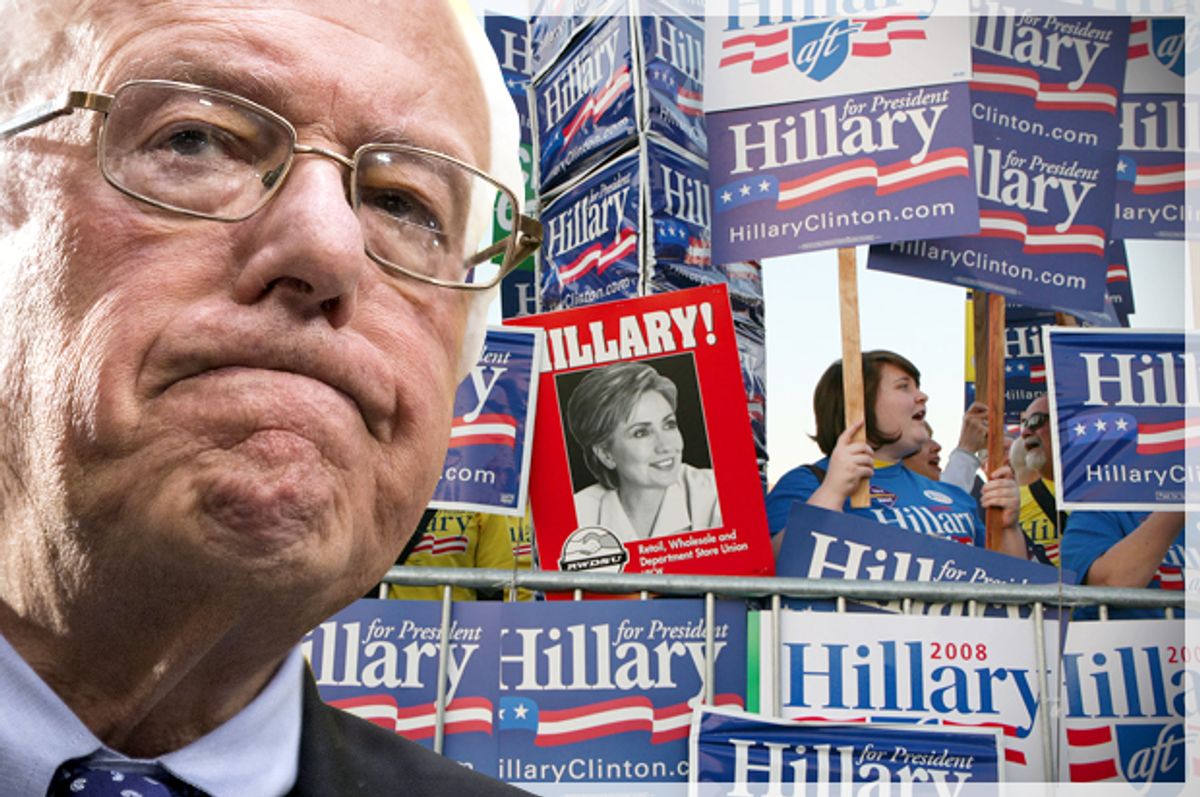 I voted for Barack Obama during the 2008 primary. It wasn't that I thought he was any better on the issues than Hillary Clinton---they appeared to be nearly identical in all important matters---or that I had any particular problem with Clinton. I just felt, all other things being equal, he was running a better campaign and I wanted to reward him for it.

But, for a small subset of Clinton supporters, Obama supporters, particularly if they were young and female, were subject to all sorts of accusations of nefarious motives. Robin Morgan penned an unfortunate piece suggesting that Obama's support was rooted solely in misogyny, characterizing his female supporters as "young women eager to win male approval by showing they’re not feminists (at least not the kind who actually threaten the status quo), who can’t identify with a woman candidate because she is unafraid of eeueweeeu yucky power." The fact that many of those women liked Clinton was ignored. Morgan's candidate was losing. It must be because forces were aligning against her unfairly and not because Obama was running a better campaign.

Clinton supporters who thought like this named themselves "PUMAs," which stood for "Party Unity My Ass." They were a small subset of Clinton supporters who became so sure of the dark motives of Obama supporters that some ended up turning their backs on the Democrats entirely. But their real impact was during the primary season, where they left an indelible impression, especially online. No doubt the PUMAs wanted Clinton to win, but their anger and bitterness ended up reflecting badly on their candidate of choice, especially in light of Obama's upbeat, optimism-based campaign.

For those who got yelled at by PUMAs in 2008, this past week is likely causing a strong sense of déjà vu.  This time around, it's not Clinton supporters who are the problem, but her detractors. As I wrote on Thursday, some Sanders supporters have taken to trading ugly accusations, verging on conspiracy theory, claiming that journalists impressed by Clinton's debate performance were deluded at best or conspiring against her at worst, citing online polls as evidence that Sanders was the "real" winner. Even though Josh Voorhees of Slate debunked this talking point and USA Today reports political science experts expect that Sanders probably didn't pick up much new support after the debate, the furor only seems to be growing.

As with the PUMAs of the past, there's just this need to believe that your candidate is falling behind because the powers that be are aligned against him/her. Those who point out that there isn't a conspiracy against Sanders---or said there wasn't one against Clinton in 2008---are written off as bamboozled or bought off. The PUMAs in 2008 accused Obama supporters of being in the thrall of the patriarchy, whereas the Sanders truthers of 2016 will accuse those who praise Clinton of sucking up to their corporate overlords. Otherwise, same story: Instead of accepting that the winning candidate might just be running a winning campaign, we're getting finger-pointing and nasty insinuations of conspiracy instead.

It's doubtful that most Sanders supporters are posting memes accusing the media of conspiring against their candidate. As with the PUMAs of 2008, it's probably just a small minority of the candidate's overall base. But even if their numbers are small, their volume is loud, loud enough that they run a strong chance of running off undecided voters who don't want to align themselves with a campaign that is attracting such maniacs.

The saddest thing about the 2008 that the PUMAs weren't wrong about one thing: The perception that Clinton was attracting an uncool, embittered base was probably hurting her in the polls. But their strategy of freaking out and acting paranoid whenever anyone disagreed with them ended up reinforcing this image. They wanted to support Clinton, but they only ended up making Obama look better by comparison.

The Sanders fanatics are running the same risk now. His biggest stumbling block is the perception that he's the vanity candidate of the hipster lefties, and especially that he's the pick of men who like feminism more when it's pushing birth control pills than pushing women into office. You have to convince the undecideds he's a candidate for more than the self-important blowhard division of the left. That process is not going to be helped by having the biggest boors hollering about how they're victims of a conspiracy to suppress the truth about 9/11, err, Sanders polling. What you really don't want is people hoping your candidate loses just so you will finally shut up.

Sanders did a good job in the debate at what was likely his main goal: Getting his name onto the radar of people who don't know anything about him. Those people probably spent time this week going onto the Internet to learn more about him. Unfortunately for him, those seekers quite likely got an eyeball of people sharing memes hyping conspiracy theories about the "mainstream media" and pouring out bile about Hillary Clinton. In other words, looking quite a bit like your right wing uncle who love Fox News and thinks that "liberal media" is trying to shove Hillary Clinton down his throat. That's probably not going to win a lot of hearts and minds, especially amongst those that are already poised to vote in a Democratic primary.

It would do well to remember how the PUMAs were thanked for hating Obama so fiercely to show their love for Clinton: With the beloved candidate joining the Obama administration. Odds are high that the a similar thing will happen with Sanders. He's no Ralph Nader, willing to throw an election to the Republicans to burnish his outsider bona fides. He showed that by being chill and friendly to Clinton during the debate. If he loses the primary, he'll probably throw his support behind the winning candidate. Something to keep in mind next time you want to share some Facebook meme suggesting he's the victim of some kind of pro-Clinton conspiracy.