Margaret Atwood on our real-life dystopia: "What really worries me is creeping dictatorship" 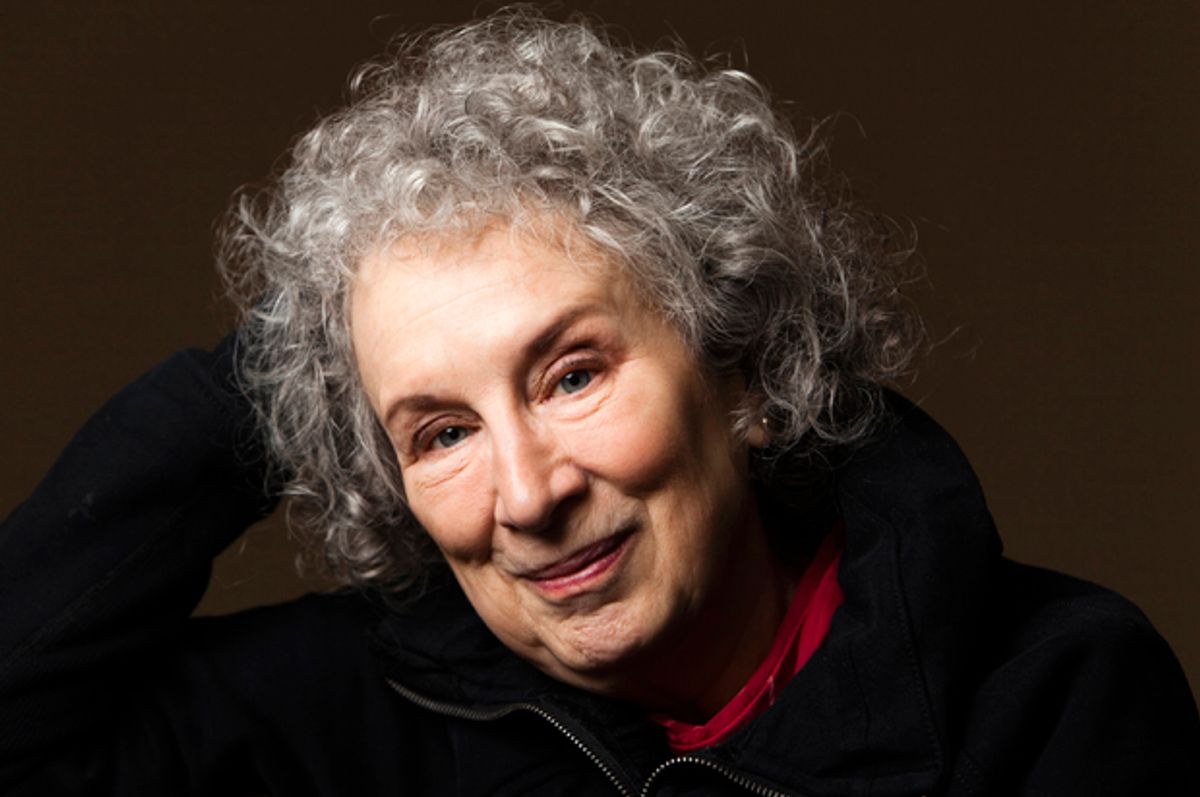 The down-on-their-luck protagonists of Margaret Atwood’s new novel "The Heart Goes Last" become fed up with living out of their car, so they move to a for-profit prison. It’s the near future, shortly after a new financial collapse, and Positron/Consilience — a gated community and a jail all in one — offers Charmaine and Stan the security of a comfortable middle-class existence, every other month; the inhabitants take turns being jailers living in houses and prisoners in cells.

This being a Margaret Atwood novel, things don’t work out quite the way poor Stan and Charmaine hope, but the author of the dystopias "The Handmaid’s Tale" and the Maddaddam trilogy ("Oryx and Crake," "The Year of the Flood" and 2013’s "Maddaddam") insists she has just tweaked what’s already happening in the world, including forced labor in prisons and the erosion of civil liberties — what she sees as the “creeping dictatorship” at home in Canada under Prime Minister Stephen Harper, who’s up for election on Monday.

On the phone from a Brooklyn hotel, the ever-outspoken Atwood spoke with Salon about dystopias, robot sex and beer — in fiction and reality.

You’re on the road at the moment — I guess there are limits to the use of the LongPen.

I’ve hardly touched ground in Toronto for a month. The LongPen [a remote autograph device which Atwood invented in 2004, in part to relieve authors from heavy touring] has gone over into business and banking … There was a period when people were saying everything was going to be digital, but apparently it isn’t.

Another of your ventures, Noobroo, the fundraising beer inspired by the brewing in Maddaddam, is on shelves now in Ontario. Were you involved in the beer’s creative process?

Yeah, [the brewers, Beau’s] came over to our house with little bottles of powdered stuff, and then they had made a tea out of each of them, and then a blend. One of those ingredients tasted like old running shoes, but funnily enough, the blend that they made tasted better with the old running shoe thing than without it — it gave it a solidity.

In the ‘70s when we [Atwood and her partner, Graeme Gibson] lived on a farm, we made all different kinds of wine; we made beer. I think the biggest failure was the ginger beer. We let it go a little too long, and then we took the top off; the entire contents shot out like fireworks!

Having written dystopias before, it seems you’ve outdone yourself with "The Heart Goes Last": It features a dystopia within a dystopia.

Despite the darkness, there’s a lot of humour in the book.

It is one of those kinds of literary constructions like "A Midsummer Night’s Dream" in which it’s funny for those watching but not for those to whom it’s actually happening, and indeed when you come to think of comedy itself, that is very often true.

We laugh at others’ misfortunes.

We do to a certain extent. If a person slips on a banana peel, it’s funny. If they slip on the banana peel and break their neck, then it isn’t.

In the Maddaddam books, a pandemic wipes out so much of humanity; you carefully set out the details, whereas in "The Heart Goes Last," the reason for society’s collapse is rather vague.

I think we pretty much do know what it was — it’s the same thing that happened in 2008, so it’s a financial collapse rather than a physical [one]. People did end up on their front lawns and living in their cars, and that is apparently ongoing.

Do you see Positron/Consilience as a logical extension of current for-profit prisons?

The problem with for-profit prisons is that you need an endless supply of prisoners to make it profitable, so there’s no incentive to make it such that criminality is actually reduced. Ultimately you want more criminality; at the very least, you want to be able to define criminality in such a way that enough people get put in prison so you can make a profit out of them. There’s also a clause in the U.S. constitution that says you can’t use slave labor — except when convicted criminals are involved. So all of that is going on right now; [the book offers] just a little twist on it.

You write about people who have the power to change others’ lives by wiping out and changing data, which seems a relatively new development in literature —

Forgery is very old. Think of it as a new form of forgery. What you’re doing is altering perceived reality and substituting a false version of it, and that can have good uses. For instance, a lot of people wouldn’t have escaped Nazi Germany if there hadn’t been good forgers. So a world in which nothing like this could ever happen would be really claustrophobic. It’s like any human tool: there’s potential good uses and bad uses. It depends on who’s got the power and what you think of those people.

Recently, a political column you wrote for the National Post disappeared from the website and then reappeared, minus some cutting comments about Stephen Harper. What happened?

Beats me! [laughs.] I can only suppose that someone at a higher level wanted it gone, and they were very foolish because they evidently didn’t understand how the internet works and how quickly people would notice [the disappearance]. And then, of course, people started parsing the missing pieces. The very things that they had wanted to conceal got a lot more attention than the other ones would have done. If they’d left [the piece] alone, it would have just blown by on the breeze. It wasn’t exactly a deep, dark, heavy, important piece of commentary. It was about [politicians’] hair. [Laughs.] On one hand, I felt that I was in an Orwell novel, but on the other hand, I felt I was in some kind of zany comedy.

On Twitter, you’ve been promoting electing “Anyone but Harper” in the Canadian election. At this point, do you feel any degree of confidence?

I don’t know. … Having been born in ’39, what really worries me is creeping dictatorship. Bill C51 [the Antiterrorism Act, which legitimizes some forms of torture] + C24 [which allows for the revocation of Canadian citizenship] is just a recipe for that.

Harper has been speaking out against the wearing of the niqab –

We’re about to be inundated by a horde of face-covering, dangerous females. Like, as if.

And he’s positioning himself as the one candidate who can stop this.

[laughs.] Yeah, well, if people are stupid enough to let themselves be manipulated that way, then they deserve everything they get. … Harper kicked off years ago on the Sikh turban issue: he was all upset about Mounties wearing turbans. What is it about stuff on people’s heads? Turbans, niqabs, [Harper’s political opponent] Justin Trudeau’s hair …

It sounds as if you view another Harper win as a dystopia waiting to happen.

Well you know, once you start releasing big buckets of hate on one group, it means open season on anyone, really, so the question to ask is, who’s next?

At one point in "The Heart Goes Last," Stan works at a warehouse that makes sex robots. Did you write about robots out of an interest in the technology, or as a means to explore the concept of free will?

I think they’re connected. If you follow the artificial intelligence debate, and in fact dating back to the original "R.U.R." or Isaac Asimov’s "I, Robot," it always comes into the picture: At what point does an artificially created thing have free will? Or to flip it around, at what edge does our own free will cease to be plausible?

I don’t know whether you’ve got up with Pepper robot: Pepper has apparently got the ability to read your emotions. Do we want that? I’m not sure. They’ve deployed Pepper in the East as a greeter, so he greets you as you come into the bank or whatever. And then they put some Peppers on sale for private use, and they put on a notification saying, “You shouldn’t have sex with Pepper.”

Perhaps there could be a dangerous malfunction during sex, such as you describe in the novel —

Well, if you look at Pepper, you’ll see it’s practically impossible: Pepper looks like a chess pawn on a rolling stand.

It might depend on the dimensions of the chess pawn.

No, the chess pawn is quite large.

One of the epigraphs to the book is a Gizmodo review of sex toys.

Well, it was a sofa. Who got that into their heads that would be a good idea? It was part of the research [for the book]. I was a bit surprised — I wasn’t expecting to find a sofa.

So many modern-day literary dystopias, such as "The Hunger Games," offer us protagonists who are heroic, or at least represent humanity’s resourceful potential to overcome tyranny. "The Heart Goes Last" doesn’t do this …

You are in fact rewriting "The Tempest," are you not?

Yes, that’s up next. That is one of those very plays in which he does that. It’s interesting how that island is a paradise for some and a hellhole to others. I’m not setting that in the future. Breathe a sigh of relief.