Our post-Snowden TV paranoia: "Homeland," "Quantico" and privacy inside the surveillance state

Anti-American sentiment is not new, but the fear of being watched is more profound on-screen than ever 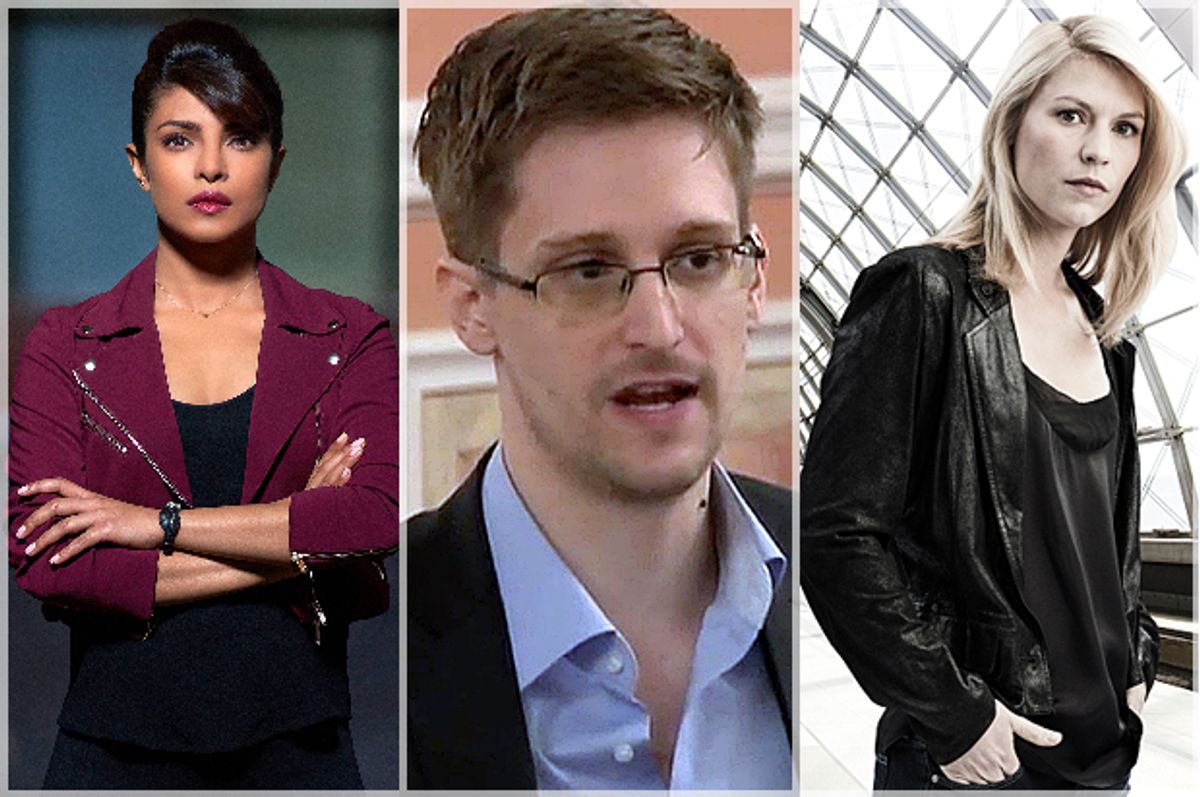 When the aliens get around to watching American film and television, I imagine they will be somewhat confused. They’ll know the flag, probably — that sheet that was poked into the surface of the moon, as a welcome and a warning — but will be a bit confused by when and how we choose to wave it. For all that Hollywood is decidedly American — of, by and for the people — the industry’s creative stance on the American government has been antagonistic for years and years. The “Mission: Impossible” and “Jason Bourne” franchises are both about renegades escaping government entrapment; “The Wire” and “The Shield” express suspicion and disillusionment about corruption and dysfunction in public institutions. “The X-Files,” which will probably be of paramount interest to the aliens, is wholly about government conspiracy, as its leads both try to uncover and actively engage in a decades-long national cover-up. (The aliens will be similarly confused by Mulder and Scully’s relationship, but that’s a concern for another time.)

In any number of spy thrillers, action movies and comic-book universes, America is Americans’ real enemy — the institution ordering the air strikes, the shadowy superstructure poisoning the water, the source of the terrifying weaponry. It’s writ large in classic films like 1989’s “Born On The Fourth Of July,” a searing indictment of the Vietnam War; it’s writ more subtly in films like 1975’s “Three Days Of The Condor,” where the lead character is enmeshed in a cynical, profiteering CIA conspiracy.

But it’s not just Vietnam-era disiullsionment and Cold War paranoia; suspicion of government is a viewpoint that so saturates media, from highbrow to lowbrow, that it’s moved beyond “trend” and into “movement.” In the currently ongoing hit “Scandal,” assembled government leaders stole an election; in the similarly mainstream show “The West Wing,” even the beloved President Bartlet (Martin Sheen) orders an assassination. In the extended Marvel universe, the very organization tasked to protect the world from supernatural occurrences becomes an apparatus used for oppression; Captain America himself becomes a crusader against the government’s excesses. It’s even a theme in children’s programming: The titular alien of “ALF” is perpetually in hiding from the government’s Alien Task Force and criticizes the president for nuclear weaponry; and the just-ended “Dog With A Blog” featured a military conspiracy, as Stan (the dog) only knows how to communicate because of some worrying experimentation.

In the current roster of television programming, paranoia about the far-reaching power of the government holds just as much power as ever. But the content has changed. Where previous nightmares included torture at the hands of the military, racial profiling and corrupt elections, many right now are about surveillance — some even name-checking whistleblower Edward Snowden. It’s an interesting paradigm shift, but clearly a topical one; the worst fears of films like “Enemy Of The State” (1998) were realized in real life. “The Wire,” which debuted in 2002, gets its title from wiretaps initiated by the police in order to entrap and prosecute incredibly well-organized drug dealers. Although the dealers were very sympathetic — and were just as important characters to the show as the police — the point of the show was to try to stop them, and most of the first season is about the team of police jumping through hoops to authorize even just one or two wiretaps. Given that we trace so much of prestige television’s lineage through “The Wire,” it’s bizarre to see how the same issue has mutated and evolved.

“The Good Wife,” which is often one of the first shows to respond to a widely discussed issue in the news, did a whole arc on wiretapping in its critically acclaimed season five. Although creator Robert King isn’t a supporter of Snowden’s actions, the whistleblower is mentioned repeatedly in the season. Eventually, the characters call out the Department of Defense and the NSA — on CBS! — and go to the mat with their unwelcome observers. “Homeland” this season has a whole arc that hews closely to Snowden’s story — although instead of starring a Snowden stand-in, it features a Hollywood version of Laura Poitras, the journalist that filmed and released “CitizenFour.” (She is named, conveniently, Laura.) The catalyst for the narrative is that two amateur hackers accidentally stumble into possession of a cache of classified CIA documents; Laura (Sarah Sokolovic) is the journalist they coordinate with.

Plenty of stories throughout history have grappled with watching and being watched, but in our current moment of post-Snowden global security, plotlines about the unwelcome intimacy of surveillance have taken on different resonance. ABC’s “Quantico,” which is so melodramatic about national security that it leaves all kinds of subtext in its wake, is exclusively about a terrorist attack that was executed by someone on the inside — another FBI agent. And though wiretapping is not specifically invoked, the driving force of drama is about all of the agents-in-training uncovering secrets about each other. Privacy of any kind is an illusion, because the rigors of Quantico eliminate any possible artifice. The investigation into the attack that provides the narrative spine of the show is the end point of all of this secret-finding; the last secret, the ultimate secret, the last shred of privacy.

Our anxieties about the American government aren’t new; our anxieties about surveillance aren’t new either, if Jeremy Bentham has anything to say about it. But what is interesting about the thread of distrust in the government in these three shows is that each is spearheaded by a woman — Alicia Florrick (Julianna Margulies) in “The Good Wife,” Alex Parrish (Priyanka Chopra) in “Quantico,” and both Carrie Mathison (Claire Danes) and the journalist Laura in “Homeland.” It may just be that women are more likely to lead a television show than ever. But it also raises the question of a very different right to privacy — that difficult-to-define principle that is the pillar of Roe v. Wade. Abortion rights are not quite as splashy of a struggle as cyber terrorism, but the women in these shows are a reminder that there are many different iterations of the drama of surveillance.