"If these inmates didn’t have mental health issues before they entered solitary, they do now" 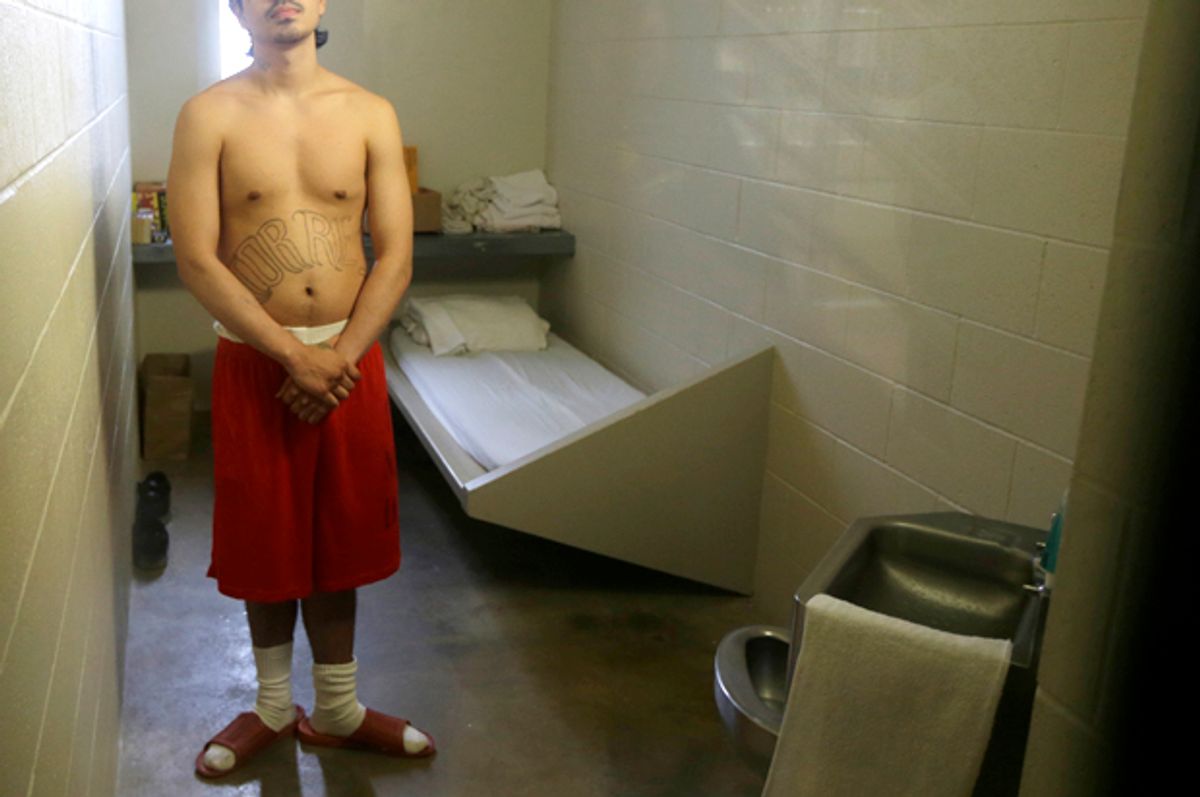 Excerpted from "LOCKDOWN ON RIKERS"

At the end of a long cinder-block corridor, a correction officer in an elevated booth passes the time with a paperback book. Across from the booth, a barred gate cordons off a dim passageway. Along the passageway wall are the words: central punitive segregation unit.

The officer looks up as I approach, and nods. As acting chief of the Mental Health Department, I’m a regular over here at “the Bing”—a curious moniker for this five-story tower of nothing but solitary confinement cells, one hundred per floor. They were designed for Rikers Island’s most recalcitrant inmates, the ones who have been pulled out of the general population for fighting, weapons possession, disobeying orders, assaulting staff. The officers refer to them as “the baddest of the bad,” “the worst of the worst.” I’m not so sure about that.

The officer throws a switch, and the gate shudders open. Around a bend, I step into an elevator car. Since the problem inmate is on the third floor, I hold up three fingers to a corner camera, which connects to a TV monitor. This is no ordinary elevator—no buttons to push here. The sweaty little box starts lifting, and as muffled wails seep through, my stomach tightens, the way it does every time I’m called over here. Which is often.

Solitary confinement is punishment taken to the extreme. Rikers folklore has it that the term “Bing” was coined to describe the human brain under the strain of solitary—it goes . . . bing! Whether or not this story is true is unclear, but it makes sense. Solitary confinement induces the bleakest depression, plunging despair, and terrifying hallucinations. The Mental Health Department looms large in these units, doling out antidepressants, antipsychotics, and mountains of sleeping pills. If these inmates didn’t have mental health issues before they entered solitary, they do now. But even the most potent medications can only do so much, and when they give out—when human behavior deteriorates into frantic scenes of self-mutilation and makeshift nooses—we’re called to a cell door.

The elevator rattles open on the third floor. Ahead, a long tinted window separates two plain doors, each one leading onto a fifty-cell wing. Behind the window, correctional staff hover over paperwork. A logbook is thrust out; I sign it and point to the door on the left, “3 South.” When the knob buzzes, I pull the door open and step into what feels like a furnace. A long cement floor is lined with gray steel doors that face each other—twenty-five on one side, twenty-five on the other. Each door has a small window at the top and a flap for food trays on the bottom.

At the far end, Dr. David Diaz and Pete Majors are waiting for me. I hesitate for a moment, dreading the walk through the gauntlet of misery. The smell of vomit and feces hangs in the hot, thick air. Bracing myself, I start past the doors, trying to stay focused on my colleagues. Still, I can see their faces—dark-skinned, young—pressed up against the windows, eyes wild with panic. “Miss! Help! Please, miss!” They bang and slap the doors, sweaty palms sliding down the windows. “We’re dying in here, miss, we’re dying!” Resisting my natural instinct to rush to their aid, I keep going, reminding myself that there’s a reason they’re in here—that they’ve done something to warrant this punishment. The officers, themselves sweat-soaked and agitated, amble from cell to cell, pounding the doors with their fists, spinning around and kicking them with boot heels, “shut the fuck up!”

Diaz, a silver-haired psychiatrist, greets me with a weak smile. Pointing to a door that’s slightly ajar, he says, “We got a head basher.” He hands me the inmate’s chart. The label on the manila folder reads “Troy Jackson.” “He’s been going downhill for a while now,” Diaz explains. “I’ve upped his meds, changed them. We’ve talked to him, but at this point, we’re out of options.”

“He’s been in for two months now,” says Pete, the lanky therapist who works with Diaz. “With three more to go.”

I wince at the length of punishment. Two entire months spent inside an eight-by-nine-foot cell—just enough room to pace back and forth, about the only activity the cramped quarters allow. No phone, no TV, with one hour of “rec,” which amounts to a shackled walk to an outdoor cage to stand alone and glimpse the sky. Although the maximum punishment for any single infraction is ninety days, there’s nothing to keep infraction tickets from piling up, which is apparently what’s happened in this case.

“All right, let me talk to him,” I say, with some vague hope of dispensing calming words that might enable Troy Jackson to hang on a little while longer.

The officer pulls open the creaking door and steps back. Inside, a Black youth stands trembling, beads of sweat dripping from his chin. He’s barely out of his teens. Behind him, a little mesh-covered window transforms the day’s brilliance into grayness. A dingy sheet is strewn across a cot; across from it is a tiny metal sink and toilet. “Please, miss, please,” he whispers. “Help me . . . ”

For a moment, Troy Jackson and I stare at one another. In his jeans and T-shirt, he looks no different from every other kid on the street. I can easily picture him shooting basketballs on a city playground, or bounding up subway steps headed for school. Instead, he’s trapped inside a cement box on Rikers Island. As his eyes plead with mine, blood seeps through his scalp, running down behind his ears. How could his young life have derailed this badly? I feel a clutch in my throat and my mind starts swirling back to my earlier days on Rikers, when I would have worked with him, listened to his story, helped him to find a better path for himself. But my days as an upbeat therapist are starting to feel like the distant past. As a newly appointed administrator, I remind myself that I’m not here to get to know Troy Jackson, or even to find out why he’s in solitary. I’m here to make sure of exactly one thing: that he remains alive. “Mr. Jackson, I’d like—”

The blood is trickling down into his eyes, and I realize that we’re well beyond any therapeutic dialogue. “Okay, just give me a minute here, okay?”

Pete, Diaz, and I huddle to the side of the cell, once again finding ourselves at a familiar miserable impasse. Although we have the authority to provide temporary relief in these situations, doing so is hardly a cut-and-dried matter. In the outside world, someone banging his head would be treated with a sense of urgency and alarm. But in here it’s different. Behind bars—and especially in the Bing—these drastic acts are common, and the Mental Health Department is under fierce pressure to not give in to the inmates’ goal of a reprieve. Of course, it’s also up to us to make sure nobody actually dies. I’m still comprehending the reality of my new job, but it’s already clear that it entails walking the thinnest of tightropes.

The question before us is whether the breaking point has truly been reached. If we agree that death or severe injury is likely, then Troy Jackson will be bused to a smaller, more specialized unit in another jail down the road. The bus ride alone seems to offer isolation-weary inmates enormous relief. We call it “bus therapy.” Once he’s a little better, though, he’ll be shipped right back here to complete his sentence. Like a weary swimmer treading water but starting to go under, he’ll be pulled out long enough to catch his breath, and then thrown back in. I can’t help but feel that this has all the earmarks of torture. But I brush the word from my mind. After all, I live in a civilized country that prohibits such things. Besides, I’m still new to this post, and there must be some reasonable rationale for this punishment that I’m missing, although I’m hard pressed to figure out what it could be.

Diaz mops his forehead with a bandanna. “Medical can stitch him up,” he says, “but if we put him back in, he’ll just tear out the stitches—smash his skull right open—I’m sure of it.”

“If we let him out,” says Pete, “we’re going to get copycats, but if we don’t, this is only going to get worse.”

As acting chief, they look to me for a final answer. I want to give this kid a break, and I’m relieved that these two veterans of punitive segregation seem to want the same. “I don’t think we can let this go any further,” I say. “If somebody else tries the same thing, we’ll just have to deal with it.”

“Listen,” Pete says, “we better do something quick.”

A loud moan comes from Jackson’s cell, and we rush back in just as the young man’s head thuds against the concrete. Blood is freely spilling now, the gash in his scalp revealing a patch of glinting whiteness.

“Please, Mr. Jackson,” I say. “We’re trying to help you. We’re going to get you out. Just give us a chance here! Troy, please!”

But Troy Jackson, beyond words, crumples to the floor.

With our decision made, I start back down to the clinic to begin the mountain of paperwork this transfer requires. On my way out, I move quickly past the cells, past the clamoring fists and pleading palms. In a day or two, we’ll be standing at any one of these other doors, faced with another scene of human desperation. Most won’t be as lucky as Jackson. For most, we simply offer words of encouragement and walk away, deeming them not yet decompensated enough to warrant the bus trip out. I try not to think about it. One day at a time.

On the ground floor, the big barred gate is inching open to allow a new shift of officers to enter. I bolt through. Wending through cooler corridors, I walk alongside general population inmates who are headed to work details or to the law library. As I pass by the jail’s main entryway booth, officers glance up from their paperwork and wave. In some ways it’s almost pleasant. I manage a weak smile and with a quivering hand wave back, all the while struggling to blot out the white gleam of Troy Jackson’s bare skull.

MARY E. BUSER worked in the Mental Health Department on Rikers Island from 1995 to 2000. She co-founded the Samaritans of New York suicide prevention hotline, and served as its first executive director. She is an outspoken advocate against the inhumane treatment of the incarcerated, especially the mentally ill, and those in solitary confinement. She has been published in The Washington Post and featured in The New York Times and the NY Daily News. She lives in Brooklyn, NY.