Donald Trump is destroying Jeb Bush: Why his 9/11 gambit could be the last straw

Donald Trump is blaming Jeb's big brother for 9/11. And Jeb, for his part, is responding in miserable form 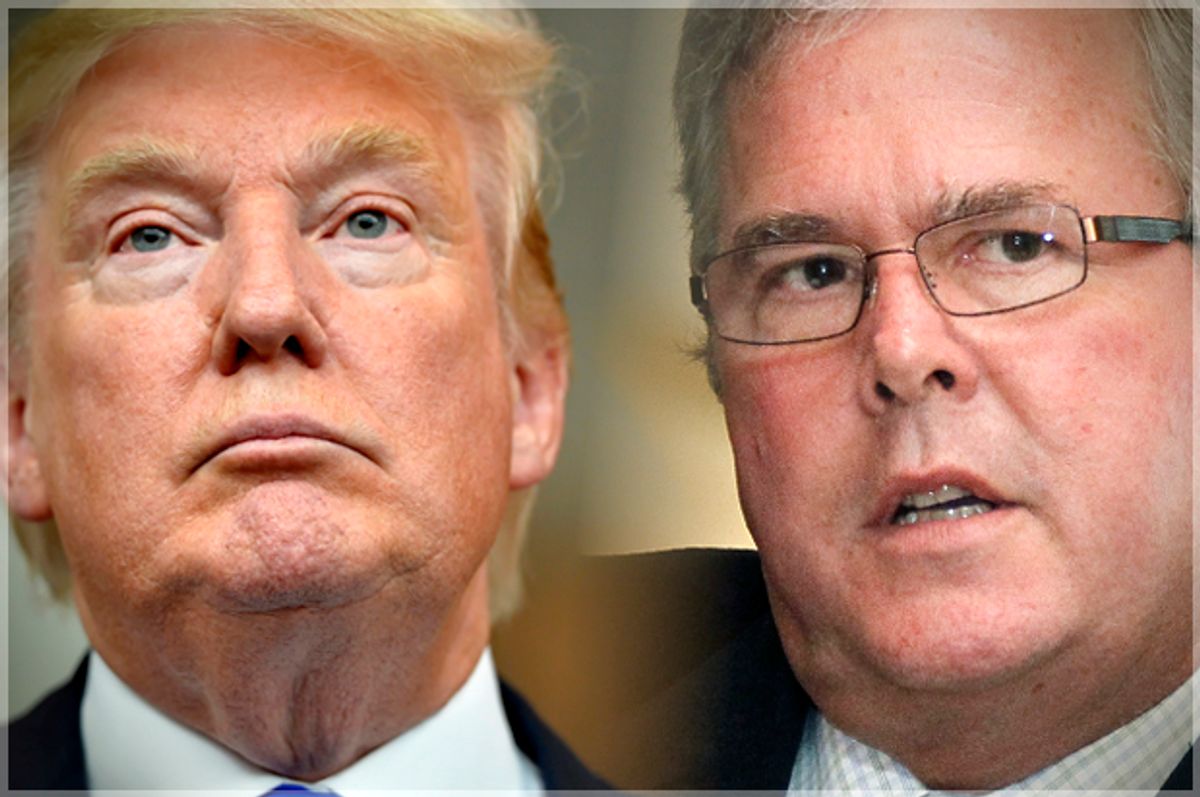 It took a while, but the Republican race has finally gotten down and dirty as you knew it must. Aside from the very real frustration of dealing with fools, clowns and oddballs dominating the large pack of candidates, at some point someone was going to have to go mano a mano with Donald Trump. Looks like first up is Jeb Bush.

This past weekend, the Donald finally pushed a button that was too much for Jeb to bear: He made the factual observation that Jeb's brother had been president on 9/11. Well, all hell broke loose, as every GOP establishment figure rose up in untamed fury that Trump would be rude enough to bring such a thing up. Why, that's sacrilege.

Bush followed up with a bizarre tweet which encapsulates the central vulnerability of his campaign and calls into question his entire rationale for running.

This is a strange argument, if only because Trump is obviously correct: The attack happened on George W. Bush's watch. Thus, it's undeniable that he did not keep us safe. But up until now, it has been considered something of a faux pas to even say as much.

Sure, there were some malcontents on the left who tepidly pointed out the obvious truth -- that if Al Gore had been president at the time, the Republicans would have impeached him (if not tried and hanged him for treason) -- had the shoe been on the other foot. That's fairly obvious. But people mostly decided to eschew the blame game after 9/11.

Gore, for his part, came forward to declare that "George W. Bush is my commander in chief" and exhort his fellow Democrats to "unite behind our president ... behind the effort to seek justice, not revenge, to make sure this will never, ever happen again." Soon after, the entire Congress, except for Rep. Barbara Lee, backed the president's decision to invade Afghanistan. There was very little political dissension. Indeed, the only serious partisan sniping came from people on the right like Andrew Sullivan, claiming without evidence that "the left" was in league with the terrorists. But for the most part, any blame for the attacks was muted and relegated to the extremes.

The government investigated, of course, and quite thoroughly. It created a blue ribbon, bipartisan commission which interviewed everyone involved, held public hearings and published a report in book form for the entire country to see. The hearings were particularly riveting as the nation got to hear from various insiders about what had been going on before, during and after the attacks. Most memorable was former terrorism czar Richard Clarke, who testified that he and others had been running around with their "hair on fire" trying to get the administration to focus on the high probability of an imminent terrorist attack on U.S. soil.

And everyone remembers National Security Advisor Condoleeza Rice, under questioning by the commission, admitting that the president had been given a very specific memo warning of the attacks on August 6th, 2001, almost a month before the attacks. When asked what the title of the memo was, Rice replied, to gasps from the audience there and undoubtedly in every living room in America, "I believe it said 'Bin Laden determined to strike inside the United States.'"

It was a while before America got to see that memo, but when we did, we saw that they explicitly warned that they would "follow the example of World Trade Center bomber." It said that in the first paragraph.

There was also a lot of information about the president's response to the attacks, including the rather bizarre fact that Vice President Dick Cheney seemed to have taken over control in the early going and that the commission was not allowed to interview the president outside the VP's presence. But with all that, there was no Select Committee on 9/11 formed after the Democrats took over the Congress in 2006 to go over the same ground. They did not belabor the issue by calling more witnesses and subpoenaing more documents and keeping the issue alive as a scab that would never heal on the backs of the families who lost loved ones on that awful day. They did not, in other words, turn 9/11 into a partisan witch hunt.

Donald Trump, of course, doesn't care about any of that. He's just a street fighter who says whatever comes into his head. And he's perfectly happy to yank Jeb Bush's chain and force him to answer for the fact that his brother was treated far better than he and his brother and all the rest of them would have treated any Democrat in that situation. He's willing to go where no one else was: He's blaming Bush for 9/11.

(Of course, his line of attack comes with its own eccentricities, like stating that he never would have let those terrorists into the country to begin with, because his tough on immigration. This is Donald Trump, after all.)

Jeb, for his part, appeared on CNN's State of the Union on Sunday to respond to Trump's needling, and clumsily said that "it's what you do after [the attack] that matters". Unfortunately, this not only stipulates that his brother did fail to keep us safe, but then invites the public to look at what he did after, which is not a record on which anyone should want to run. (The obvious question: Was attacking a country that didn't attack us, leading to thousands more lives lost, evidence of his "keeping us safe"?)

No, Jeb Bush would be wise to simply roll his eyes at Donald Trump and let him rant on without responding, because whenever he opens his mouth, he creates a whole new set of questions. This point was driven home when Jake Tapper brought up Benghazi in this context:

TAPPER: Obviously Al Qaeda was responsible for the terrorist attack of 9/11, but how do you respond to critics who ask, if your brother and his administration bear no responsibility at all, how do you then make the jump that President Obama and Secretary Clinton are responsible for what happened at Benghazi?

JEB BUSH: Well I -- the question on Benghazi which, is hopefully we'll now finally get the truth to, is was the place secure? They had a responsibility, the Department of State, to have proper security. There were calls for security, it looks like they didn't get it. And how was the response in the aftermath of the attack, was there a chance that these four American lives could have been saved? That's what the investigation is about, it's not a political issue. It's not about the broad policy issue, is were we doing the job of protecting our embassies and our consulates and during the period, those hours after the attack started, could they have been saved?

TAPPER: Well that's, that's kind of proving the point of the critics I was just asking about, because you don't want to have your brother bear responsibility for 9/11 and I understand that argument and Al Qaeda's responsible, but why are the terrorists not the ones who are responsible for these attacks in Libya?

BUSH: They are, of course they are but -- of course they are, but if the ambassador was asking for additional security and didn't get it, that's a rproper point and if it's proven that the security was adequate compared to other embassies, fine, we'll move on.

Jeb doesn't seem to realize that every time a Republican bellows "Four Americans died on Clinton's watch!" and in the next breath insist, "How dare you say George Bush didn't keep us safe on his watch," something doesn't quite track. Even Americans who are otherwise too busy to pay attention to the granular details can tell that this is a very strange construction. If you watch the video, Jeb himself misses more than a couple of beats when Tapper brings it up -- he obviously felt the dissonance.

All congressional majorities play politics and there is always a political element to any investigation by one party into the presidency of the other party. But the Republicans have turned this into a blood sport in ways that are unconscionable. It's one thing to hold hearings about Hillary Clinton's cattle futures trades back in the '70s or the White House Christmas card list. These are stupid wastes of time and money but they are not about life and death issues for which the Republicans should have a little bit more respect. After 9/11, it would have been very easy for the Democratic Congress to turn what the Bush administration did into a three ring circus of recriminations and insinuations for political gain. (There were plenty of people who thought President Bush could have been impeached for what Jeb insists was his brother's finest hour -- his actions after 9/11, and the Iraq invasion in particular.)

Unlike these relentless Benghazi Inspector Javerts, for better or worse, the Democrats thought it would be more legitimate to win the presidency and the Congress through the electoral process in which the epic failure of the Iraq invasion was the focus rather than trying to blame George W. Bush for failing to keep the country safe on 9/11. And that was noble of them.

Donald Trump is not noble. Jeb Bush is going to be questioned on this and he's going to need a better answer than saying his brother kept the country safe. He didn't. And he didn't do any better in the aftermath. He made some good speeches and, to his credit, he cautioned Americans not to blame Muslims in general for the attacks (which may be the best thing he did). Other than that, it's not a good record, no matter how you look at it. In fact, it's astonishing that Jeb ever thought he could run without having to answer for it. Trump is going to make sure he does.

Meanwhile, the upside to this little squabble is we've finally been able to put the partisan responses to 9/11 and Benghazi up for comparison. Lets just say it doesn't look all that good for Team Red. Jeb and The Donald's spat is only going to make that clearer as time goes on.