"When I see them, I see us" Black and Palestinian activists proclaim in video featuring Lauryn Hill & Danny Glover. 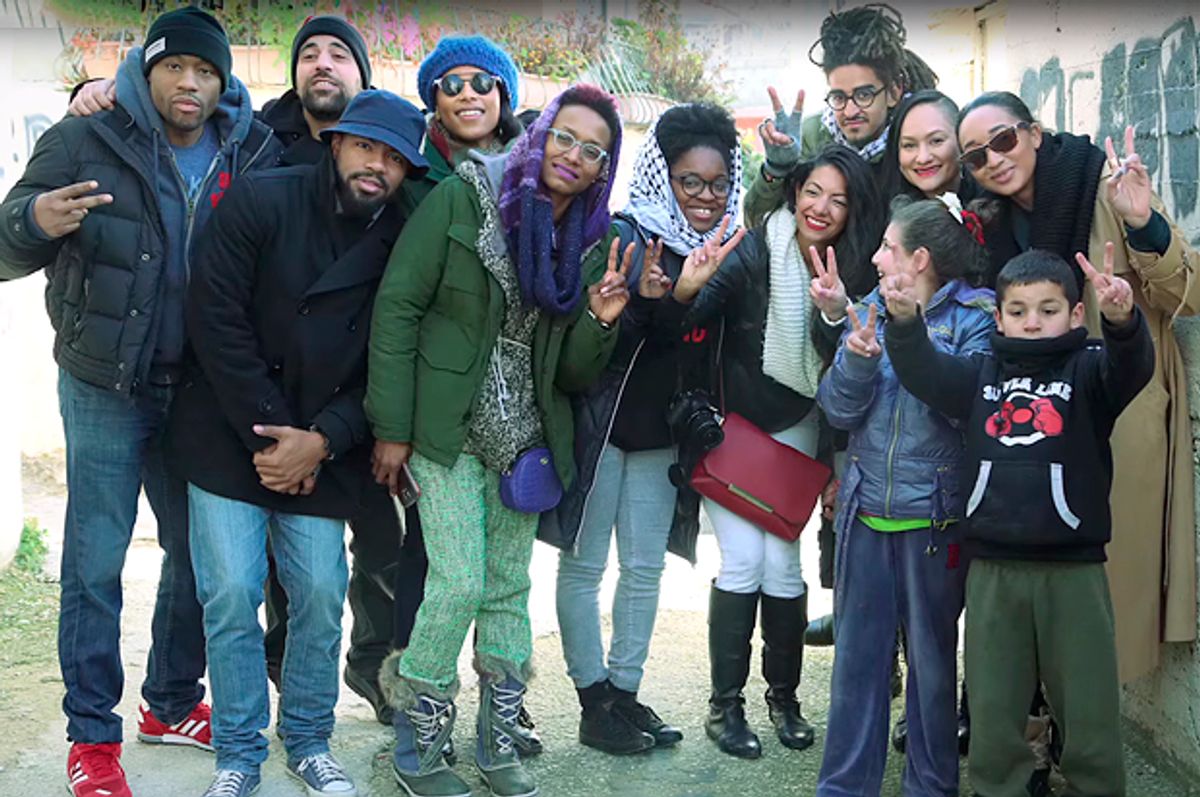 "We are not statistics," Black and Palestinian narrators proclaim in unison, as they draw attention to the racist violence to which both of their communities are subjected. "When I see them, I see us."

Participants in the video hold signs with phrases like "Your walls will never cage our freedom"; authorities "mark our children as criminal"; and "I remember: Deir Yassin, Greensboro, Gaza, Charleston," referring to cities in which there have been massacres of Palestinians and Black Americans.

Lauryn Hill holds a sign in the video that reads "Free all political prisoners." Omar Barghouti, a Palestinian scholar and leader in the Boycott, Divestment, and Sanctions (BDS) movement, appears with the message "From occupied Palestine, in solidarity with protesters rising up in Baltimore and Ferguson." Columbia University Palestinian-American scholar Rashid Khalidi also holds a sign saying "We suffer from an incurable malady: hope."

Renowned scholar and activist Angela Davis is featured in the video with a sign reading "Racism is systemic. Its outbursts are not isolated incidents." Explaining why she considers the message so important, Davis said "Mutual expressions of solidarity have helped to generate a vigorous political kinship linking Black organizers, scholars, cultural workers, and political prisoners in the U.S. with Palestinian activists, academics, political prisoners, and artists."

"Palestinians have spoken out passionately against racist police violence in Ferguson and Baltimore as Black people have vehemently stood up in defense of Rasmeah Odeh," Davis continued, referring to a Palestinian-American activist who faces prison time and deportation for what she says was a false confession obtained through Israeli torture. "These powerful images represent a journey from struggle against tyranny to a collective hope for a just future," Davis added.

The participants, who are in a variety of different organizations, say "Black-Palestinian Solidarity is not an organization but rather a space for solidarity and important conversations about it." They have launched a website, and say they plan to continued doing more work in the future.

Palestinian legal scholar Noura Erakat said she first thought of the idea for the video during Israel's U.S.-backed attack on Gaza in the summer in 2014, code-named Operation Protective Edge. In the 51-day military assault, which Israeli leaders described as the latest act of "mowing the lawn" in the densely populated strip, an independent investigation by the U.N. found that 2,251 Palestinians -- roughly two-thirds of whom were civilians, including 299 women and 551 children -- were killed, and 11,231 more -- including 3,540 women and 3,436 children -- were injured, over 1,000 of whom are now permanently disabled. On the other side, six civilians in Israel and 67 Israeli soldiers were killed.

The first Black Lives Matter uprising in Ferguson began while the war in Gaza was still raging on, in response to the killing of unarmed 18-year-old Michael Brown by police officer Darren Wilson. "Palestinians used social media to share their advice on how to deal with tear gas and rubber bullets, and protesters chanted 'From Ferguson to Gaza, we will be free,'" Erakat recalled. "Organically, an analysis emerged highlighting similarities, but not sameness, of Black and Palestinian life, and more aptly, of their survival."

"Our communities are dehumanized using similar logics of racism and repression" Erakat added. "It behooves us to explore those similarities further and recognize that our exceptional conditions are the norm."

Kristian Davis-Bailey, an activist and journalist deeply involved in both the Palestinian solidarity and Black Lives Matter movements who helped create the video, stressed that this "is not just intellectual or symbolic solidarity." He noted that activists around the country and the world are pressuring governments, universities, churches, companies, and other institutions to divest from corporations invested in the illegal occupation of the Palestinian territories as well as from the private prison system.