Meet our new Ayn Rand: Ben Shapiro's hamfisted propaganda fiction is even worse than you guessed

The wingnut pundit resents the liberal tone of TV, but turns out cartoonish, right-leaning prose 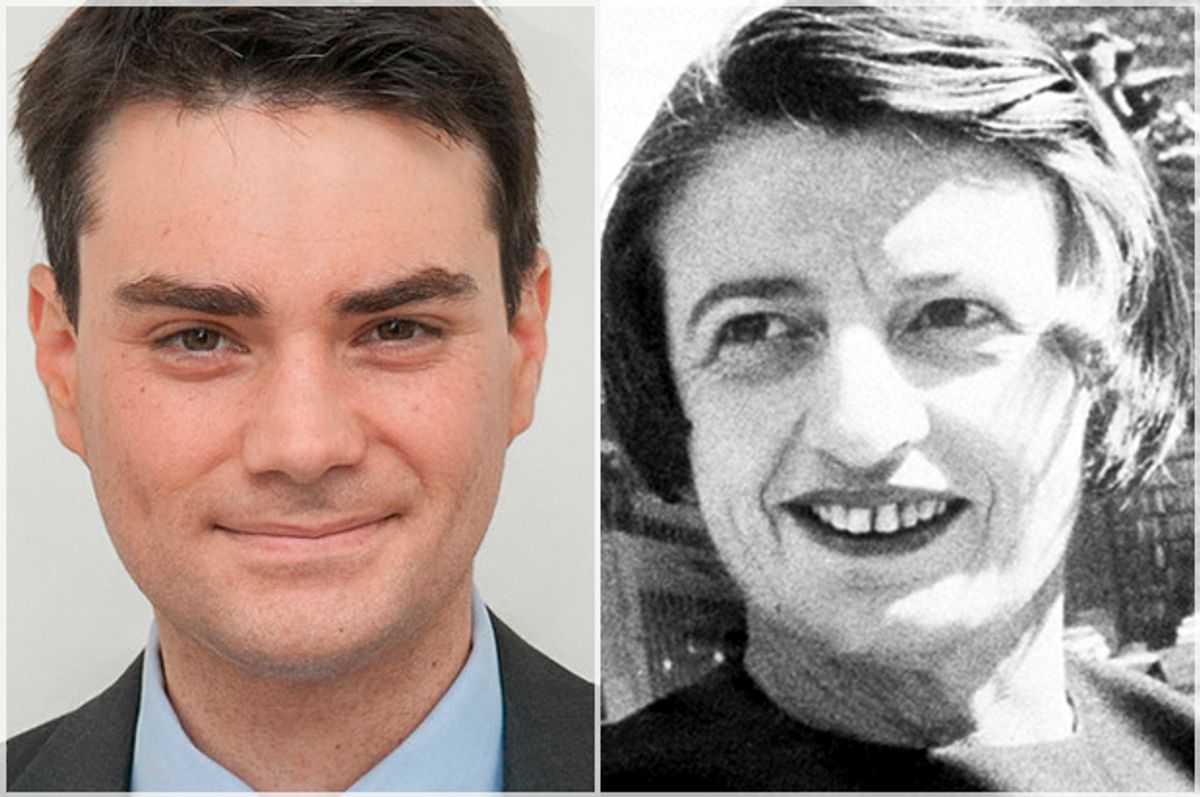 For decades now, conservatives have lamented the fact that while they’ve often won political races, they’ve “lost the culture.” This perceived injury is part of what motivates the charge against “politically correct” movies, television, literature, and visual art. And as the baton of reactionary resentment is passed to a younger generation, Ben Shapiro has become perhaps the loudest voice on the subject, documenting the ideological takeover on air, on Breitbart, and in books like “Primetime Propaganda: The True Hollywood Story of How the Left Took Over Your TV.”

It’s not the only thing Shapiro gets exercised about – today he tweeted about Ahmed Mohamed with “Scam artist who rode lies to the White House meets boy with broken clock” – but a politicized culture is clearly one of his obsessions.

Shapiro has just jumped in himself with a short story collection. And if he’s aiming to produce fiction that is not ideologically driven, he’s got a very long way to go. The book’s title story – “What’s Fair” – marries Mitt Romney to Sarah Palin to produce an unpleasant kind of offspring that leave have many on the right cheering. Conservatives have produced an enormous amount of good literature over the years -- literary modernism of Eliot, Pound, and Yeats was mostly a right-leaning movement – but this is pretty amateurish stuff.

"What's Fair" shows some basic literary problems – the characters are utterly characterless, the plot is cartoonish, the language ordinary – but let’s concentrate on the way politics drives the tale.

The story begins with the narrator telling us “I’ve always thought of myself as a fair man.” After a paragraph reiterating his point:

I remember a time when I was a kid that Dad gave me and Jim Christmas presents. He gave Jim a wristwatch and he gave me a hunting knife. Boy, was Jim taken with that wristwatch. He’d wear it around every day, rain or shine, always careful to keep it clean, to keep it wound. If he scuffed it up, he’d buff that scuff right out – he’d spend hours with a handkerchief, spitting on it and rubbing it, spitting on it and wiping it until it looked brand new.

The story turns on the rivalry between the two brothers and a conflict that leads one to murder the other. (I’ll respect Shapiro’s effort enough not to give any more away.)

Given the way the American right demonizes urbanites and waxes rhapsodically over the heartland – what Sarah Palin calls “real America” – it shouldn’t surprise us that the story is suffused with rural nostalgia.

From his use of the term “moseyed,” the background of small-town football, to the epiphany-like discovery of his old hunting knife in a creek, this is a story by a Los Angeles-raised, Harvard Law School-educated pundit that struggles to tell a convincing rural tale. It’s like a bad country song crossed with a horror movie.

The story also works out, in strange form, Mitt Romney’s “47 percent” comment, in which he described nearly half the country as people “who are dependent upon government, who believe that they are victims… These are people who pay no income tax.” The story’s narrator, Tommy, seems to be one of these low-lifes, while his brother is educated, entrepreneurial in spirit, and, as he announces, “I produce.”

Now since the story is about “What’s Fair,” it makes sense to try to figure out how the murder and an ensuing “surprise” twist at the end are supposed to make sense. What we end up with is a kind of heavy-handed moralism – that people get what they deserve, a kind of ham-handed play on the Republican call for “personal responsibility.”

Since the characters, storytelling, and prose itself offers such little plausibility or pleasure, it’s likely that the story is all about its “point.” In that case, it becomes clearer what Shapiro is up to here. He’s not working in the lineage of the literary story, or even the American horror tale, but in the line of Ayn Rand. In which case, given the tone of the American far right these days, Shapiro the fiction writer may have a rosy future indeed.