"I learned that in America, people actually had to pay for health care. I would have to be very, very careful." 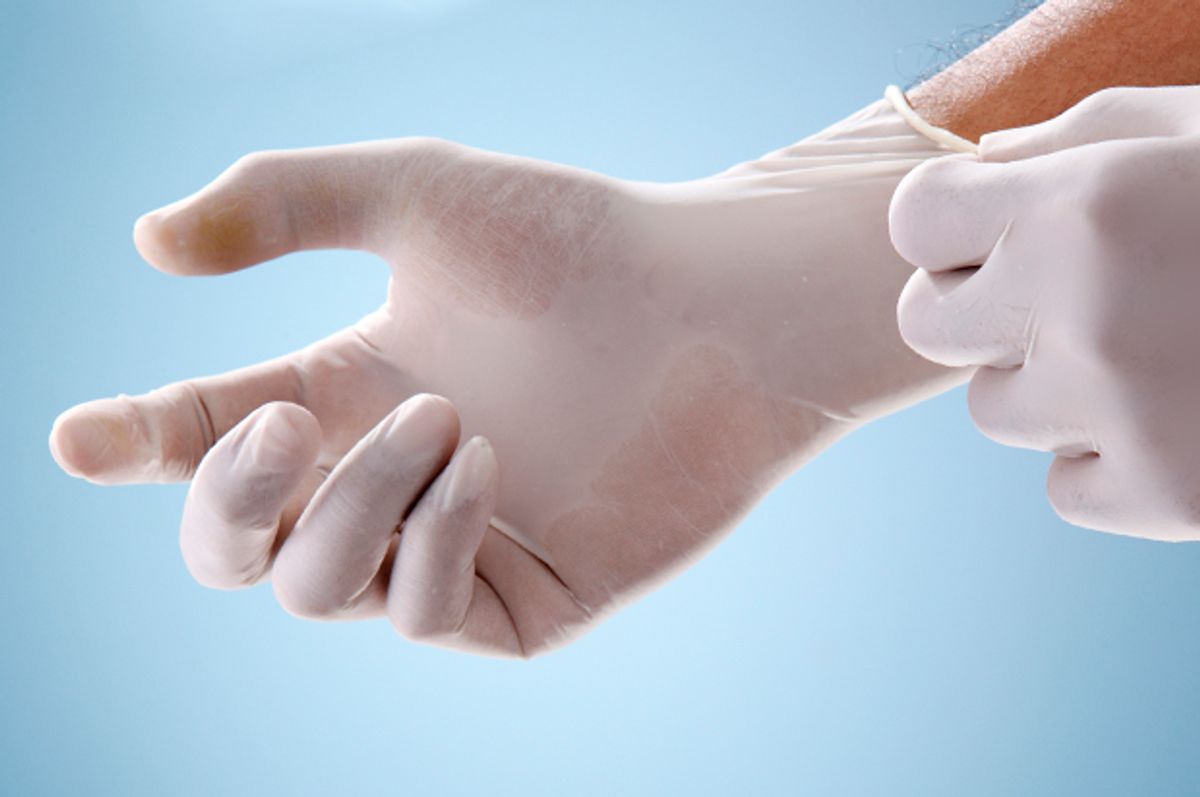 When I was a kid, I broke my nose eight times over the course of ten years. As a toddler, a four-year-old girl named Jessica pushed me down the stairs while I was on a Hobby Horse. Then I fell off a slide. Ice-skating, tobogganing, a particularly inglorious game of Red Rover: these are all things that took an unfavorable toll on my face. Perhaps most embarrassingly, I once accidentally smashed myself in the snout with a wizard staff while role-playing a game of Elfquest with the girls who lived across the street.

My nose’s misfortune was one of the many reasons I was lucky to have been born and raised in Canada. All the rides to the infirmary; the X-rays; all the bandages and painkillers; these are things that ended up costing nothing (read: zero dollars), thanks to Canada’s government-funded health care system. The only burden on my poor mother were the phone calls that dragged her out of work and the icy stares from the doctors, who after a while must have assumed that she had been beating me with a tire iron. My point is this: my mother took care of me as best she could; but when she couldn’t, my country stepped in. We were protected.

Everything changed years later when my parents announced we were going to move away from Toronto, to Orlando, Florida, right before my senior year of high school. The reasons for this were various: my mother had been pining for life in a warmer climate, and my stepfather simply did whatever my mother wanted. As for me, well, apparently my mom overheard me say that I might want to study marine biology once I got to college. The very next day, I came home to find my bedroom walls laden with scientific posters of whales and dolphins, as my stepfather busied himself setting up a freshwater tank next to my desk. We would make the trek come summer, I was told, to a place with all the fish I could ever want to study.

This was difficult for me to swallow. First off, the allure of fish-- no matter how many-- was not as sumptuous as one might imagine. For my parents, this move was merely an opportunity to wear Bermuda shorts in wintertime. For me, it meant leaving friends and family behind, certainly; but also my country—which, in a lot of ways— was worse. Canada is cold, yes. Very, very cold. But it is also clean, and polite, and safe. To my knowledge at the time, the U.S. was a hotbed of cocaine, guns, and speedboat-related gang shootouts (to be fair, I’d gleaned much of my info from old episodes of Miami Vice). Plus, as was explained to me, people actually had to pay for health care. I would have to be very, very careful with my nose.

My folks were undeterred; they eagerly sacrificed their existence in the Great White North, ostensibly to facilitate my quest for higher knowledge. Oblivious to the state of education in Florida, we rented an RV that June, filled it with everything we owned, and drove straight down into a dank, spider-infested nightmare.

During my tenure in the Sunshine State, I would learn three things: a warmer climate does not necessarily mean a more pleasant climate; never leave your windows open; cockroaches can fly.

I would also be faced with a series of what my step-dad referred to as “cultural differences.” When kids at my new high school found out I was Canadian, for instance, they would uniformly respond with “I’m sorry”.  Whenever I would say “I’m sorry” (which, given that I’m Canadian, was a lot), kids would uniformly mock my accent, peppering in a few ‘eh’s’ in case I didn’t get the gist. On my first day of class, my marine biology teacher, Mrs. Jarrell, asked if my last name was “a Jew name,” then went on to announce that, “for some dumb reason, your people willingly ignore the scriptures.” (I lost interest in the study of aquatic life shortly thereafter.) However, the most significant difference between Canada and America, at least from my purview, was the American attitude toward health care.

In this new world, this U.S. of A., not only was health care not free, it was so insanely expensive, people actually had to purchase protection from one of a number of private corporations in order to avoid financial ruin. Further, if people couldn’t afford this protection, they were considered lazy, which I would come to learn, in the U.S., is synonymous with “poor.” As fascinating as this new ritual was, the idea of paying for medical insurance didn’t thrill me. And that is why-- once I inevitably assumed the even more daunting expense of college tuition—I opted not to bother.

And so, at 18 years of age, I joined the myriad shruggers and gamblers and budget prioritizers who tiptoe through the United States hoping they don’t contract West Nile or get hit by a bus.

For the first time in my life, I was uninsured.

To be fair, for a long time it didn’t really seem to matter. I whizzed through my 20’s with the confidence of an immortal-- albeit an immortal with chronic sinus infections (guess why). In my early 30’s, I got a decent job. Through the job, I got fancy-pants insurance. With the insurance, I got the peace of mind I’d once had in Canada. For the first time in a long time, I got regular check-ups. I got free contact lenses. I got cocky.

But then, around my 38th birthday, I got my first bout of hemorrhoids. This is one of those rites of passage no one warns you about when you’re young. No mother ever sat her child down to recall the first time the veins around her own anus swelled up like a snakebite. It just doesn’t have that “there will come a special day…” feel to it. A hemorrhoid, after all, is not like an erection, or a period, or a mysterious wet spot in your pajamas. It’s not a life-affirming body change. A hemorrhoid is the fuse on a ticking time bomb, the beginning of the end. It is a tiny, thrombosed step toward oblivion.

Pro tip for Canadian-Americans: with insurance, preventive procedures like this one are typically one hundred percent free. As it happened, I had the fancy-pants insurance, so I figured it couldn’t hurt. I took the doctor’s referral, and a few days later, went in for a consultation. There, the gastroenterologist gave me a very delicate explanation of what was about to happen. For those who haven’t had the pleasure, here’s the gist:

3.     The next day, you’re drugged and anally probed with an HD camera attached to a plumbing snake.

Despite all that, I made an appointment for the following week.

However, two days before the actual procedure, I got a call from my insurance company. My first adventure with hemorrhoids had apparently raised one of their billion red flags, and-- according to the relentlessly cheery agent on the other line-- qualified as a pre-existing condition. The upshot was that my colonoscopy would no longer be free. In fact, I was now on the hook for 70 percent of the cost of the procedure, a sum totaling over $3500. Those hemorrhoids had literally and figuratively come back to bite me in the ass. The Canadian in me seethed at being denied something so crucial, but given that my salary left no wiggle room for the frivolity of preventative medicine, I canceled the procedure.

A year later, the job ended, and with it went the fancy-pants insurance. Instead of going through COBRA (which was $450 a month!) I opted to sign up for a very basic plan, one that would cover only the worst case scenarios-- the type insurance companies refer to as “catastrophic.” I didn’t need much of a safety net: I was a non-smoker, I didn’t eat raw oysters, and I was, overall, still young-ish and spritely-ish. I figured I was in an optimal position to pot-hunt for the bare minimum.

Except I wasn’t. I was refused. By every carrier to which I applied.

Turns out those year-old, long-gone hemorrhoids were still itching and blazing in the annals of my medical records. I was told very matter-of-factly that I would not be eligible for coverage until I had an elective colonoscopy, to prove that my expired butt piles weren’t the symptom of something more insidious. Naturally, I would have to pay for this myself, 100% out-of-pocket. I would have to plop down five grand just for the privilege of plopping down another fifteen hundred a year for insurance that probably wouldn’t cover anything anyway. Because if hemorrhoids are a means of exclusion, then so is everything else: dry skin, premature balding, unsavory foot smell. all those yearly sinus infections. Life, as it happens, is one big pre-existing condition.

Once again, I was uninsured: a word that held a wholly different connotation now that I was in my 40’s. It echoed in my mind like ‘slutty’ or ‘artsy’ or ‘socialist,’ or all those other labels that carry a mild civil stigma, even in a universe of imperfections. Uninsured people still live with their parents, whisper the cool kids. They might be okay for a good time, if that’s what you’re after, but you definitely shouldn’t marry one. The American in me felt irresponsible and ashamed. The Canadian in me longed for the protective embrace of my mother country. To be uninsured in this place, with its lax gun laws and over half a billion germy, unwashed hands seemed a little bit like doom.

But then came the Affordable Care Act.

ObamaCare, with its insurance exchanges and extended coverage. ObamaCare, with its subsidies, patient protections, and its elimination of the pre-existing condition. ObamaCare, with its terrible fucking website that made it infuriatingly difficult-- but not impossible-- to sign up. For less than the price of the ‘catastrophic’ insurance I was denied, I was able to get coverage comprehensive enough to cover a 90-year-old with one lung.

Best of all, I was able get that colonoscopy.

I drank the syrup. I spent a day on the toilet. I got violated by a doctor whose career choices I find baffling. But it was all worth it.

Because the doctor found and removed two sessile polyps from my colon, both of which were precancerous.

So you can rant to me all you want about the deficient, unconstitutional, big-government, communist health care forced upon us by a leftist dictator; believe me, it will fall on deaf ears. It’s the only thing remotely Canadian about this country, and that is nothing to be “sorry” about. The Affordable Care Act saved me thousands of dollars this year, and will have saved me hundreds of thousands down the road. Also worth mentioning: it potentially saved my life. At the very least, it saved my ass.

Josh Flaum is a film and television writer based in Los Angeles, and is the co-creator of Geek & Sundry's popular web series 'Written by a Kid'. Also, he has a cat that has destroyed a third of everything he owns.