GOP Rep. thinks he's a Randian hero, but is quickly learning that even conservatives find his arrogance revolting 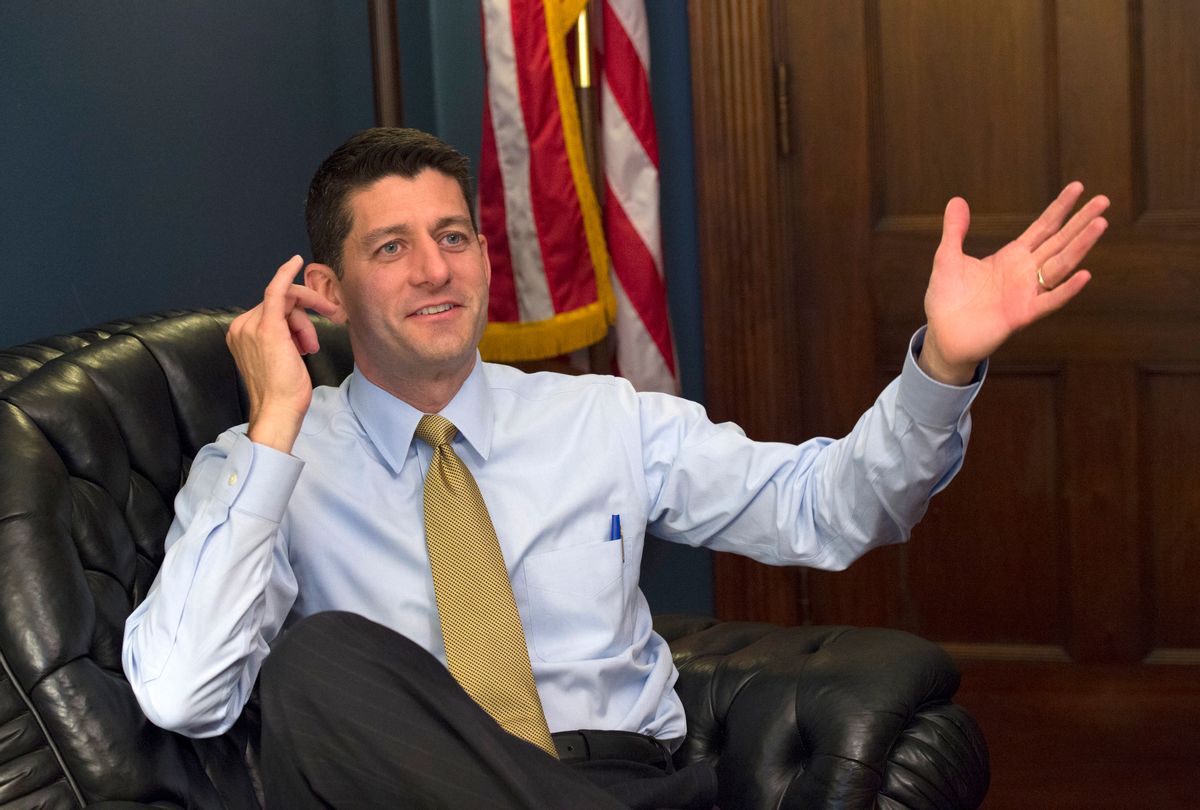 In this photo taken June 9, 2015, House Ways and Means Committee Chairman Paul Ryan, R-Wis., answers questions during an interview with The Associated Press in his office on Capitol Hill in Washington. First, give presidents the power to strike trade deals. Then overturn President Barack Obamas health care law, overhaul the tax code and reform welfare. And someday? Figure out whether to run for president. Call it the New Ryan Plan, a map not just to big changes in the nations fiscal policy, but to Paul Ryans future. It points the ninth-term congressman and chairman of the House Ways and Means Committee away from the presidential campaign trail and into the thicket of policy that he says will set the country on better financial footing. The path likely emerges at a familiar decision point _ whether to run for president _ somewhere down the road. Ryan, 45, says he might decide to take that step, someday. (AP Photo/Molly Riley) (AP)
--

Damn, even by Republican standards, Paul Ryan is an arrogant S.O.B., drunk on years of flatterers telling him tales about how he's so much smarter than the real world evidence suggests. After a couple of weeks of playing up his reluctance to be House Speaker, Ryan has descended from the mountain to issue the list of his conditions that must be met until he'll deign to take on one of the most powerful political offices on the planet. The conditions include some empty, high-minded language about being a more effective party, but also a couple of very specific, presumptuous demands: That the party unify behind him and oh, yeah, he doesn't work weekends because he likes to spend time with his family. This from a guy who happily lectures the rest of the country about how our desire to have a life outside of work means we're lazy.

That Ryan thinks he's in a position to issue such haughty demands isn't really that much of a surprise. Ryan is a major fan of the works of Ayn Rand who has said that we are "living in an Ayn Rand novel" and that now, more than ever, we need Rand to explain to us "the morality of capitalism, the morality of individualism." Of course he imagines that he's a Galtian superhero, the kind of man who deserves to have the unquestioning obedience of his underlings and the opportunity to spend his weekends relaxing on a boat while the lesser people have to toil away working overtime.

Alas, the problem for Paul Ryan is that everyone who subscribes to Randian philosophy thinks the same way: That they, by dint of their self-appointed status as smarter and better than everyone else, should also be the masters of the universe.

That's the problem with Ayn Rand's worldview. In order to be John Galt, you need the hordes of nameless plebes to lord your alleged superiority over. But the Republican party is made up of self-appointed John Galts. When everyone in your party believes they're meant to be giving orders, not taking them, it's really hard to have basic discussions, much less organize effectively to get anything done.

The Galt vs. Galt tension exploded almost immediately after Ryan's egocentric list of demands was rolled out. Rep. Tim Huelskamp, who leads the Tea Party Caucus, asked, "Is he serious?"

Rep. Raul Labrador also called out Ryan for being arrogant enough to want to change the House rules, saying that if the rules are "good enough for [Thomas] Jefferson, it’s got to be good enough for Paul Ryan." The Freedom Caucus isn't having it, either.

Conservative media in particular had one resounding message for Ryan: Who are you to think you're John Galt? We're the John Galts around here!

Laura Ingraham and Hot Air both used the word "emperor" to describe how they imagine Paul Ryan sees himself. The Drudge Report hammered Ryan for being totalitarian and tried to imply he's a secret liberal. Breitbart echoed Labrador's talking point about Ryan's arrogance in wanting to overturn Thomas Jefferson. Even the Fox News news vertical, which is supposed to just be for news and not opinion pieces, titled the article about Ryan's demands, "His way or the highway? Ryan makes big demands for speaker run." The message is loud and clear: They do not like being told what to do, no sir.

I once heard someone say, though I apologize in that I can't remember who, that libertarians are just authoritarians who think they should be the boss. What's funny is that Ryan likely could have evaded this problem by simply displaying even a modicum of humility in the face of being asked to take on a role that is still referred to as "public service," even though it's clear that Ryan and his fellow travelers think serving is for the little people. He could have had his family visit him more often. He didn't have to demand the repeal of the right of Congress to oust him mid-session. He could have just toned down the language a little more and tried to give the appearance of meeting people halfway.

But of course, he couldn't do any of that. What would Ayn Rand think? Real Galtian heroes just stomp into a room, issue their demands, and refuse to play ball until all the little people acquiesce. But that relies on dealing with people who agree with your view that they're the little people, and most definitely your average conservatives, who have also been feeding on a steady diet of Ayn Rand, do not see themselves that way.

What we're seeing is the result of the Randianization of the Republican Party. Which also suggests that this isn't a temporary blip. You simply can't put together a roomful of people that all believe that compromise is weakness and expect them to actually come to something approaching consensus. Ryan thought he could whip conservatives into shape, but all he likely succeeded in doing them was angering them and causing them to retaliate.