The genius of "Gilmore Girls": When your writing is this good, you can always go home again — even to Stars Hollow

This is one reboot we're thrilled about 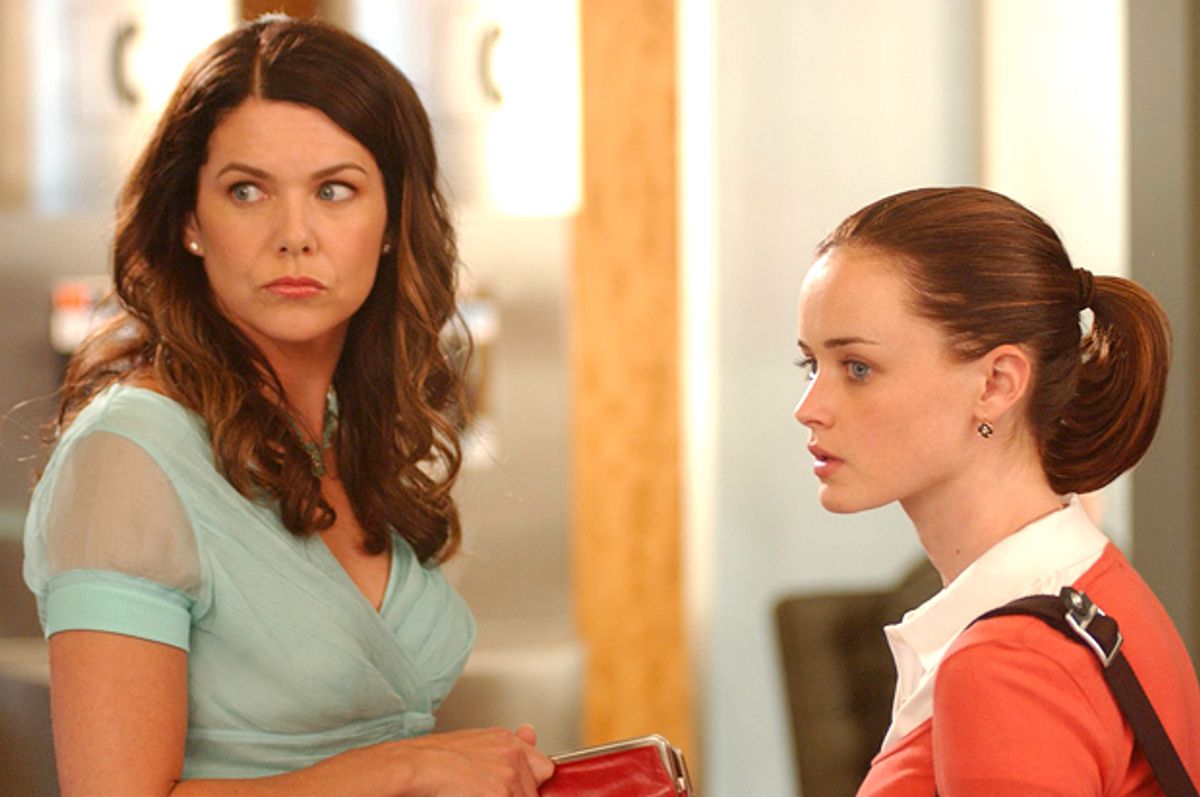 Earlier this week, news broke that Netflix has reportedly agreed to reboot the beloved ‘00s comedy-drama “Gilmore Girls.” The revival, which TV Line reports is rumored to take the form of four 90-minute movies, should also hopefully reunite the fast-talking mother-daughter team of Lorelai (Lauren Graham) and Rory (Alexis Bledel) Gilmore; Lorelai’s prim and proper mother, Emily Gilmore (Kelly Bishop); and rugged diner owner/Lorelai love interest Luke (Scott Patterson). For fans, the even better news is that creator Amy Sherman-Palladino—who was not involved with the show’s much-maligned final season—is said to also be involved with the reboot.

From a symmetry standpoint, this news is delightful: Sherman-Palladino, who’s long said she already knows how the series will end, now has the opportunity to finish “Gilmore Girls” on her terms, the way she envisioned it. That’s significant, because she and husband Daniel Palladino (who’s also said to be returning) were always extremely protective of how the show’s characters were portrayed. The denizens of “Gilmore Girls” were all deliberately and sometimes flagrantly imperfect, but at heart they were decent, smart people who sometimes made bad decisions. This made the characters more resonant and relatable.

Perhaps more important, Sherman-Palladino also recognized how important it was to let the characters grow and evolve: They didn’t have their educational or personal ambitions stifled, and (save for perhaps the last season) weren’t shoehorned into awkward situations for the sake of good TV. For all of the you-can-always-go-home-again vibe of Stars Hollow, the show’s fictional small town setting, the main characters weren’t stuck in a quaint bubble. Sure, there was absurdity—the deadpan character of Kirk Gleason (Sean Gunn) in particular added odd sweetness, while town troubadour Grant-Lee Phillips popped up every so often to add quirkiness—but “Gilmore Girls” never collapsed into preciousness or used wacky scenarios as a storyline crutch. This whimsical backdrop always added levity when needed, as a way to draw the characters out of their self-contained lives and turmoil.

In hindsight, this was one of Sherman-Palladino’s most impressive feats. Because the “Gilmore Girls” communication style was based around snappy, brainy dialogue, it would be far too easy for the show to rely on cultural references or twee gestures at the expense of depth. (See: what’s often plagued “The Simpsons” and “Family Guy.”) But the show’s characters weren’t caricatures; in fact, its female characters especially possessed uncommon complexity. They were intelligent and ambitious, and also allowed to slip up without fear of being devalued or stabbed in the back by friends. The “Gilmore Girls” universe was a safe place for women to make (and learn from) mistakes.

Bledel’s portrayal of Rory was particularly compassionate. An academic achiever who matriculated at Yale, she spent the later part of the show dealing with growing apart from her college boyfriend, Logan (Matt Czuchry), facing setbacks as she attempted to kickstart a journalism career, and dealing with her complicated relationship with her father, Christopher (David Sutcliffe), and mother. Rory found support in best friend Lane Kim (Keiko Agena), who herself struggled with the cultural clash inherent between pleasing her strict Korean mother and following her dreams of rock stardom, and her academic rival/frenemy Paris (Liza Weil). The show’s adult women also served as role models in regards to friendship: Lorelai and Sookie (Melissa McCarthy) became small business owners after buying an inn, and consequently juggled motherhood, family life and the realities of running a business.

This compassion extended to the show’s abundance of romantic and familial drama. “Gilmore Girls” always treated these scenarios with dignity. The knowledge that Luke has a secret daughter understandably sent Lorelai reeling in season 6, while the ongoing friction between Lorelai and her parents—which was amplified or muted depending on how much it involved her ex or Rory’s future—had empathetic nuance despite its overt frustrations. “Gilmore Girls” always excelled at showcasing the shades of grey in any interpersonal conflict and its aftermath, which made the show realistic even during its head-scratching plot twists (Rory stealing a yacht?).

Surprisingly, not all fans were thrilled by the news of this reboot. The New York Times chimed in with an article, “Why a New ‘Gilmore Girls’ Wouldn’t Really Be ‘Gilmore Girls.’” The latter piece somewhat-obviously points out that the revived series “will be a different thing, no matter how much of the original talent returns, because there’s one thing even the best-funded, best-intentioned reboot can’t restore: lost time.” This point comes into play later, when the article concludes that “for the reboot to be good, it probably can’t be the same — it will need to be informed by the lost time, and not deny it. Go ahead and take us back to Stars Hollow, Netflix. But you can’t take us back to 2007.”

That last statement is completely correct. However, it’s difficult to imagine a scenario where a “Gilmore Girls” revival would try to turn back the clock. The show’s premise often hinged on the tension between stasis and growth—how ingrained family dynamics conflict with the unpredictable nature of personal and emotional maturation. And much to the chagrin of Emily Gilmore, life’s little (or big) curveballs triumphed over tradition and how she’d like things to be. In short, it would be out of character for “Gilmore Girls” to try and pick up right where it left off when the series ended. Sherman-Palladino all but said so herself in a past interview.

“The beauty of Gilmore, and the beauty of family-relationship shows, is you never really run out of story,” she told Entertainment Weekly in 2009. “You’re going to battle your family until you’re all in the ground. Those things never resolve, doesn’t matter how much therapy you get. Ten years later, there’s still going to be [material] there to mine and to delve into.” Indeed, the new “Gilmore Girls” show will already have to figure out how to grapple with the 2014 death of actor Edward Herrmann, a.k.a. Lorelei’s father, Richard Gilmore. (In fact, it wouldn’t be a stretch to think that the first new episode would focus on how each family member is dealing with his death, and where they go next.)

To be sure, “Gilmore Girls” was absolutely a moment in time, a snapshot of how mothers and daughters navigate adolescence and adulthood, even when the adults don’t feel particularly responsible or mom-like (Lorelai), or know how to accept their daughter’s offbeat path (Emily). However, plenty of “Gilmore Girls” fans are invested enough in the characters to want to hear more of their story. What happened next—where did their lives go? What events continued to shape them in the years they’ve been away? During the show’s initial run, it was never easy to predict what would happen, which is part of what made it so appealing and enduring (and why arguments over who Rory should end up with are still so fierce). Getting reacquainted with “Gilmore Girls” requires having no expectations about what the characters should be like now—and instead reacting to and embracing the people they grew into.