Dying to work for Amazon: Where's the outrage for the exploited, vulnerable temp workers who make Bezos's empire run?

Amazon's already under fire for its corporate culture. A new HuffPo story shows warehouse temps have it even worse 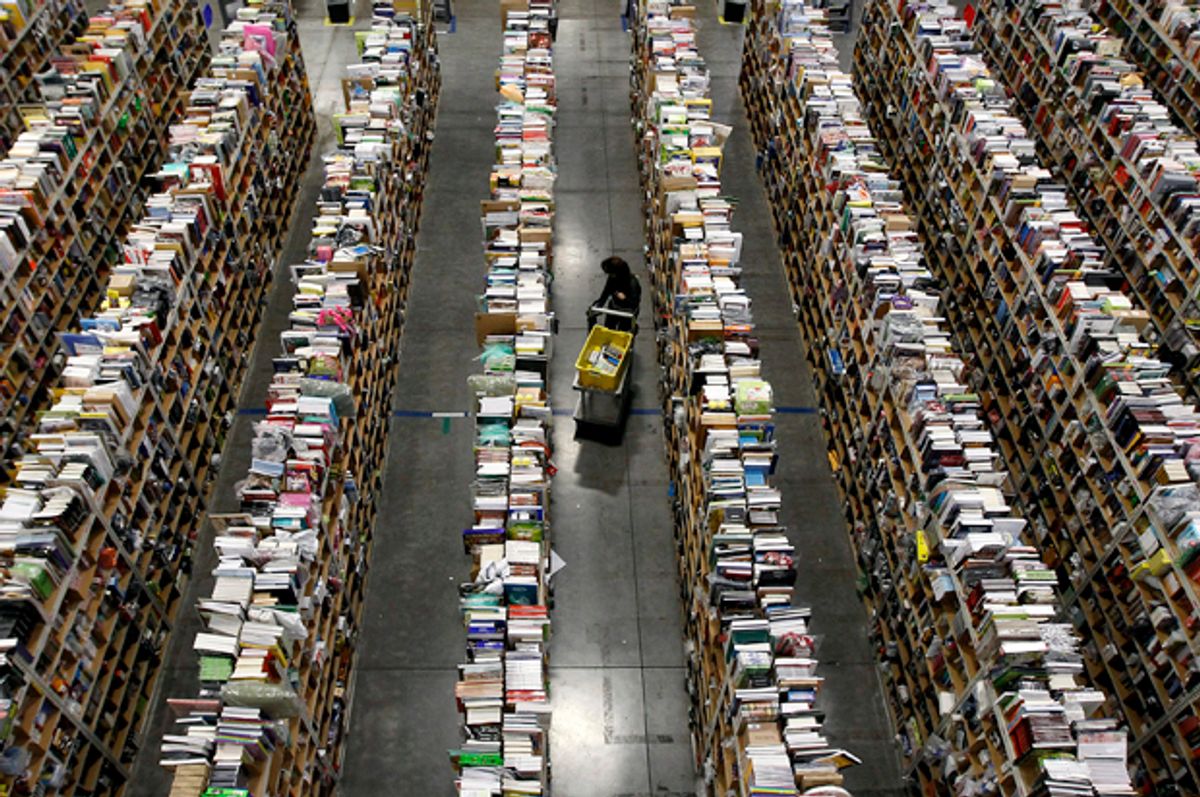 Earlier this week, Amazon dragged itself back into the news with a retort to the New York Times over the paper’s scorching coverage: The two-months later response reminded people how devastating the Times’ story on the company’s white-collar workforce had been. That piece that chronicled a demoralized, overworked office staff in painful detail was surely revisited by many readers.

But a new story about the way Amazon treats workers lower down the food chain is even more poignant: “The Life and Death of an Amazon Warehouse Temp,” in the Huffington Post, spends most of its time on one 29-year-old man who died while toiling in a Virginia “fulfillment center.” The story's detailed look at the life of Jeff Lockhart Jr. helps humanize the piece. But overall, what the rigorously reported and sharply written story exposes is a larger crisis among low-wage workers: One that’s being very profitably exploited by temp companies.

The majority of the story concerns Lockhart, who came in as an Amazon temp after being laid off at a building supply store. A burly, 300-pound guy who married his high school sweetheart – they had three children between them – he worked as a “picker,” taking orders from a handheld scanner. He was fast and good. The constant labor at the speeds required, perhaps, was not especially healthy for a man of his size. One winter morning about 2 a.m., he went to eat “lunch” in his car, called his wife, and went back to work. “Less than an hour later,” reporter Dave Jamieson writes, “a worker found Jeff on the third floor. He had collapsed and was lying unconscious in aisle A-215, beneath shelves stocked with Tupperware and heating pads.”

It’s a frightening story, expertly told, and the impact on Lockhart’s family is especially sad. But even more frightening is the way Jamieson gets at the larger system that makes this kind of thing – and surely, many less dramatic but still unfortunate stories we never hear about – possible. “When the warehouse opened its doors in 2012,” writes Jamieson, “there were about 37,000 unemployed people living within a 30-minute drive; in nearby Richmond, more than a quarter of residents were living in poverty.”

After an opening chunk of narrative, we hear more about the economic machinery behind temping:

Amazon… says it has 90,000 full-time U.S. employees at its fulfillment and sorting centers—but it plans to bring on an estimated 100,000 seasonal workers to help handle this year’s peak. Many of these seasonal hires come through Integrity Staffing Solutions, a Delaware-based temp firm. The company’s website recently listed 22 corporate offices throughout the country, 15 of which were recruiting offices for Amazon fulfillment centers, including the one in Chester.

This system isn’t unique to Amazon—it pervades the U.S. retail supply chain. Many companies choose to outsource shipping work to so-called third-party logistics providers, which in turn contract the work to staffing companies. At some of Walmart’s critical logistics hubs, multiple temp agencies may be providing workers under the same roof. The temp model also extends far beyond retail. The housekeeper who cleans your room at a Hyatt hotel may not work for Hyatt, but for a temp firm you’ve never heard of, for less money and fewer benefits than a direct hire… For employers, the appeal of this system is obvious. It allows companies to meet demand while keeping their permanent workforce at a minimum, along with all the costs that go with it—payroll taxes, benefits, workers' compensation costs and certain legal liabilities.

We've learned, of course, that full-time work for Amazon, whether in a warehouse or its Seattle offices, is hardly a barrel of laughs -- but these are people who aspire to a full-time permanent warehouse job. The lingering recession and Lockhart’s limited prospects allowed him to get sucked into the machine – he didn’t have many other options. As what used to be middle-, even lower-middle-class, jobs are turned into temporary positions because companies can get work done cheaper, inequality and poverty will continue to grow.

The HuffPo story shows the importance of a long, deeply reported story even in an age in which they are economically difficult to produce. The next great reported piece on the nation’s inequality crisis should be on the predatory nature of temp agencies and their relationship to big corporations in an age of the destabilized American worker. That linkage is as exploitative as for-profit colleges, one of which Lockhart briefly attended. And if the arrangement receives significant coverage, perhaps the larger system by which human lives are traded for corporate profits will begin to be exposed in the same way. We can only hope.