This is right-wing terrorism: The frightening new rise of church and clinic arson -- and why you won't hear about it on Fox News

Right-wing extremists are setting churches and clinics ablaze. It's a scary -- and vastly undercovered -- story 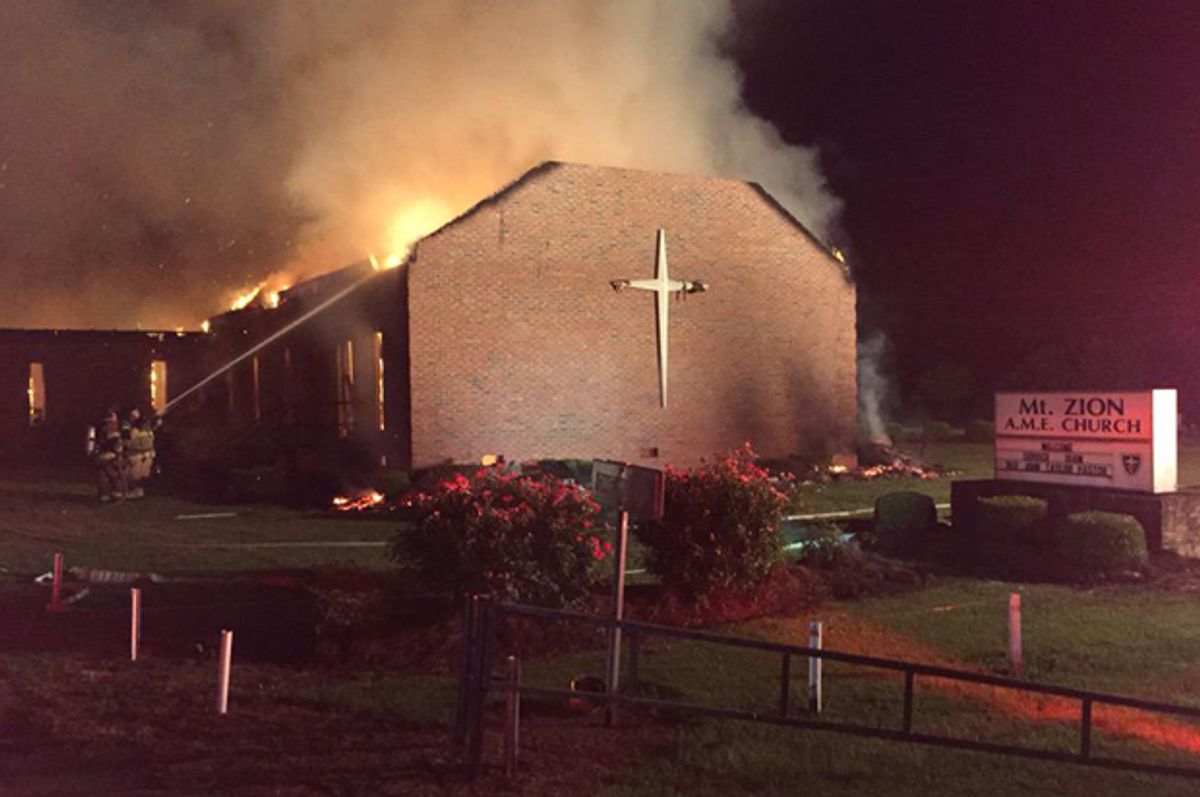 While Donald Trump is bragging about closing mosques to fight Islamic terrorism, there has been an under-reported surge of right-wing terrorism recently in the U.S.

Since July, when anti-choice crusaders released hoax videos that falsely claimed that Planned Parenthood sells fetal body parts, there has been a rash of arsons at clinics, at least one of which doesn't perform abortions. Just this week, police in New Hampshire arrested a teenager threatening a Planned Parenthood with a hatchet. After the racist church shooting in Charleston in June, itself an ugly act of domestic terrorism, there were a series of fires at black churches across the South.

And now St. Louis law enforcement fears that there's an arsonist on the loose in the city, setting fire to churches with predominantly black or racially mixed congregations. This is on top of what the Southern Poverty Law Center was already calling a resurgence in domestic terrorism across the United States.

That we are living in an era of major conservative backlash is not news. From the wholesale assault on reproductive rights to the dramatic increase in restrictions on voting to the bizarrely enduring Donald Trump campaign, the evidence everywhere suggests that right-wing America is freaking out and lashing out. They can feel their control over the country, which has a black president and legal gay marriage now, slipping out of their fingers.

The temper tantrum has grown so massive it's threatening even the Republican party, which is being torn apart by purity tests and fury over even the slightest hint of cooperation with liberals, who are seen as a subversive threat to be stomped out instead of fellow citizens to work through your issues with.

So it's really not a huge surprise that, with right-wing anger levels so high, a small number are taking it to the next level and setting fire to churches and clinics. Unfortunately, this isn't really getting the media attention it deserves.

The summer's church burnings got a smattering of coverage, but less than the debate over the Confederate flag. The fire bombings and arson attacks that have hit four Planned Parenthood clinics since interest renewed in attacking the organization have barely registered in the national media, according to a report by Media Matters. These St. Louis burnings are so frequent and close together that they are getting more national media coverage, but it has barely gone beyond bare bones reporting to dig into the deeper issue of the connection between the rise in right wing radicalism and the rise in domestic terrorism.

"The media need to report these incidents as what they are: domestic terrorism," Ilyse Hogue of NARAL said in a recent press release on the clinic attacks. She is exactly right about that. Terrorism, by definition, is violence enacted in order to assert your political will. And while none of these have been as horrible as the Charleston shooting, this rampage of right wing arson attacks should still be very concerning. These are no ordinary crimes, but an attempt to use violence to cheat the democratic system and to intimidate people through the threat of violence. You know, terrorism.

In the past, when the Obama administration tried to address domestic terrorism, they faced an ugly backlash from conservatives who dismiss, despite all the evidence to the contrary, the fact that all this hateful right-wing radicalism does inspire violence. This time, possibly because the shootings in Charleston were so horrific, the backlash response has been muted in mainstream conservative spaces like Fox News.

Still, the more fringe right was going nuts. WorldNetDaily published an alarmist article suggesting that this was part of "Obama’s legacy of targeting conservatives" and denying that domestic terrorism is real, claiming that all the anti-government and racist attacks are about "mental illness" instead. (They don't even acknowledge the issue of anti-abortion violence.) The article also asserts that it's a cover story for what is actually an attempt to---what else---take all your guns away.

Bryan Fischer at Renew America wrote that Obama has " an abiding hostility to people of Christian faith", and that this renewed effort to stomp out domestic terrorism is evidence of it.

Breitbart News, which is closer to the mainstream of conservatism, though it isn't quite on the level of Fox News, also raised the alarm, putting "domestic terrorism"  in scare quotes and trying to discredit the Southern Poverty Law Center and minimizing right-wing terrorism.

The fact of the matter is that a lot of conservatives are more interested in evading responsibility and avoiding hard conversations about what kind of extremism they're producing than about actually taking measures to stop terrorism. A recent exchange on a Facebook page advertising a protest at a Planned Parenthood clinic in Pullman, Washington, is a small but terrific example of how these things go. The clinic, which does not perform abortions, was set on fire and suffered extensive damage in September. Video shows someone throwing a flammable object through the window. But even though their extensive picketing of the clinic almost certainly inspired the arsonist, anti-choicers in the area kept picketing the burn site.

One young conservative showed up at the Facebook page organizing one of these protests to express that he is "concerned, very concerned, about this new Planned Parenthood protest that is scheduled for a week from tomorrow in Pullman again", because of the arson and because the clinic "does not even provide abortions". He was concerned that this would ignite the "supposed war on women image". In this, he is correct. Few things scream "war on women" like following up an arson with a protest in service of cutting women off from affordable contraception and other non-abortion reproductive health services.

However, the young man's concerns were blown off. "But John....just because some arsonist committed a crime does not mean we should stop advocating for the life of the unborn, or caring about the health of women," a woman immediately replies. (When antis talk about "the health of women", they're usually referring to their belief that non-procreative sex, even if accomplished just with contraception, is inherently bad for women.) Soon after, the young man's post was deleted, though it's unclear if the organizers took it down or he did, for fear that his reasonable opposition to seeming to support misogynist terrorism would make his fellow anti-choicers dislike him.

It was a small moment, but indicative of the indifference that conservatives demonstrate to terrorism done in their name. Considering that would-be terrorists generally think they're expressing community values, that shrug response is going to be read as support. In light of this, it's all the more important for the media to cover acts of domestic terrorism. If nothing else, it will raise the heat on ordinary conservatives to condemn these acts, hopefully discouraging future terrorism. It might even lead to a debate about how radical right wing politics are inevitably going to lead to some right wingers thinking violence is the solution when democratic methods fail.