Welcome to "Sesame Street," Julia: The show's first autistic character is a big deal — maybe not for the reasons you think 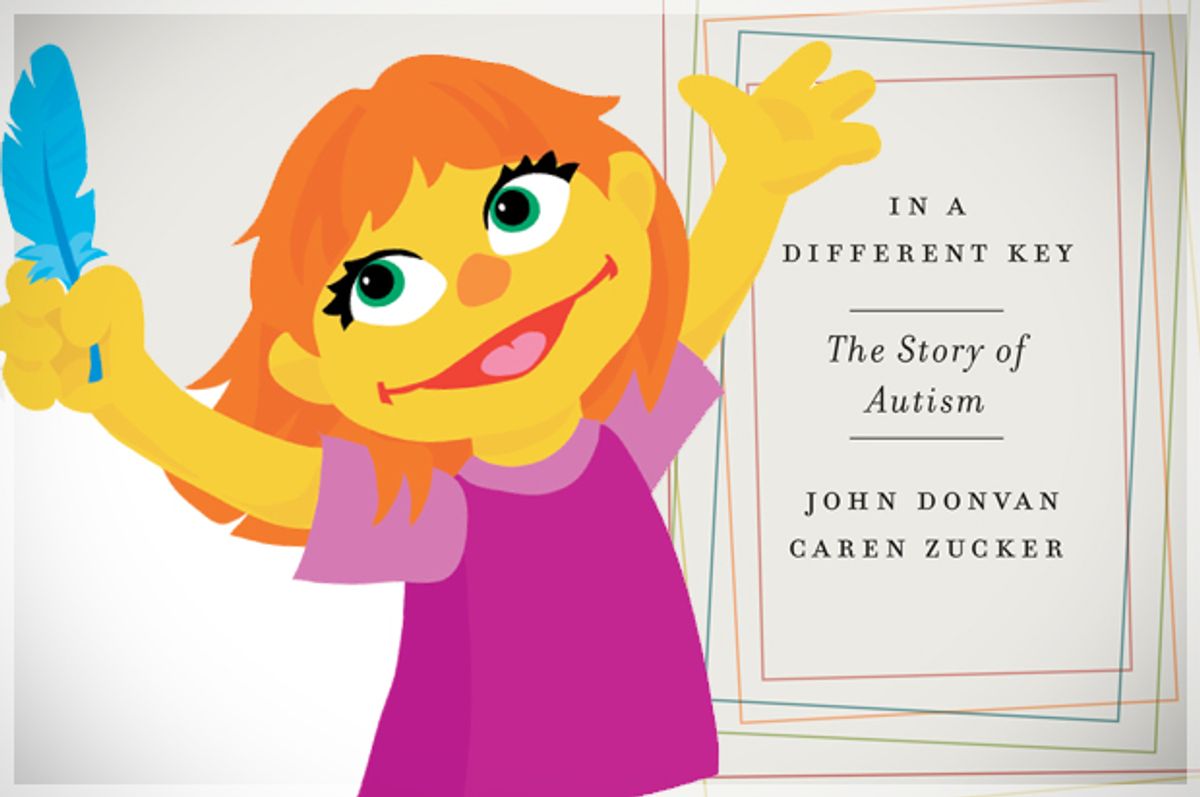 A Muppet with autism!  Her name is Julia, and she’s just now joining the cast of digital Sesame Street.  As described by the Sesame Workshop’s Dr. Jeanette Betancourt, in an interview with ABC News, Julia is a character with a “moderate” degree of autism – a choice that took some thinking through, since there are so many ways that autism manifests itself in those who have the diagnosis. But in what is known as the “autism community” – those on the “spectrum,” plus their families, their friends, and their support teams of teachers, therapists and doctors – the specifics of Julia’s personality are beside the point. Judging by the emails hitting our inboxes this morning, and the tweets coming in – from friends and contacts all over the community – Julia’s arrival is being received as a very big deal, and perhaps even a little overdue. A Muppet with autism! Of course! And why not before?

Yes, Julia’s debut is a landmark moment, but not entirely for the reasons cited most often in today’s coverage, where the people behind "Sesame Street" are getting well-deserved praise for encouraging greater acceptance and understanding of people who exhibit autistic characteristics.  That’s important, but just as significant is how, compared to the not too distant past, the topic of autism has risen to the top levels of society’s awareness. Put simply: in 2015, everyone has heard of autism. Sesame Street did not have to do much explaining about why Julia is different (and the same), and why she was joining the cast.

That was not the case 46 years ago last month, the first time an American TV show featured a character with autism, in a single episode of the medical drama "Marcus Welby, MD."  In that case, the portrayal of a boy with autism named Pauly could hardly have been called heart-warming. Wildly out of control, Pauly barely spoke, and had been rejected even by a school offering special education. His frazzled, exhausted parents were on the verge of breaking down. While his mother struggled to work with him at home, his father favored sending him away, out of fear that Pauly would hurt his newborn baby sister. The good doctor Welby fought the father on this, but he did so by dealing out some harsh educational discipline to the boy, which included slapping seven year old Pauly across the face when he failed to pay attention.  In a climactic scene, Welby scolds Pauley’s mother for going too soft on him. “You will see Pauly spanked!” he shouts. “You will learn to spank him yourself! Or you will see him in an institution for the rest of his life.”

It was a bleak portrayal of autism, and yet, much like Julia’s debut this morning, it was roundly celebrated by what constituted the autism community of 1969: parents of severely autistic children, who were in the earliest days of organizing as advocates for their children. Back then, there was only one autism organization in the U.S., the four-year-old National Society for Autistic Children (today’s Autism Society of America). Hardly put off by "Welby"’s depiction of their children, NSAC brought the show’s producer to its annual meeting in 1970, along with his wife, and gave him with an award. That’s how hungry for recognition the cause of autism awareness used to be.

A lot changed in the decades separating Pauly from Julia. "Rain Man" happened, presenting a more nuanced portrait of one man’s autism. Temple Grandin became the most famous autistic person on earth, while her ability to communicate and her success in life made autism look less alien to “outsiders.” Also, the thinking evolved on the question of where autism comes from. The once entrenched belief that unloving mothers were the source fell by the wayside. So did the false alarm of an autism “epidemic” caused by vaccines. Ironically, however, the vaccine scare probably did more to make the world think and care about autism than any prior amount of advocacy by autism organizations, which now exist by the carload.

So do fictional characters with autism, who can be seen in sitcoms and cops shows and on Broadway. That said, Julia does occupy a special place. "Sesame Street" is where kids have always been shown that being different comes along with being human. More than that, it happens to be a show that has had strong appeal over the years for children with autism as viewers. A while back, we spent an afternoon with a man in his mid-thirties who recited for us, verbatim, an entire minutes-long "Sesame Street" explanation of the prepositions “on,” “over,” and “under.” The bit’s rhythms and repetitiveness had struck some chord with him when he first saw it in the 1980s, and he literally never forgot.

Regarding Julia, it will be pointed out – and should be – that she represents but one way of having autism, and that by virtue of being able to talk, she is not representative of the hundreds of thousands of individuals who are far too impaired to be out on their own playing with friends and getting along with Elmo. It is true of the news media, too, that when they present portrayals of autism, they almost invariably seek out individuals with whom there are high odds of give and take in an interview, because, of course, the news likes talkers. This has the unintended result of leaving out many of the children who will never be able to live independently as adults.  Julia’s autism does not seem to suggest that level of impairment.

Still, the makers of "Sesame Street" made a bold and canny choice in making her female. Statistically, autism affects far more boys than girls, by a factor of four to five. It may be that girls with the condition are being undercounted, but it is certainly the case that most research and therapies build on studies where boys outnumber girls, which may have a negative impact on how autism is recognized and treated in girls. Temple Grandin aside, autism is presented to the public as a mostly male experience. Julia is no doubt going to help change that.

Ideally, she will also help further the destigmitization of autism, a process which has been ongoing for decades. In school settings, however, bullying of people with autistic traits – especially those who were once given the label of Asperger’s syndrome – has been a continuing problem. This is where the "Sesame Street" effect can be so powerful. They’re going to make Julia part of the gang. Elmo’s going to be her buddy. With friends like that, she’s going to teach a lot to a lot of us, and have some fun along the way.

John Donvan is a correspondent for ABC News, and host/ mod­erator of the Intelligence Squared U.S. Debates. His forthcoming book written with Caren Zucker, "In a Different Key: The Story of Autism," will be published by Crown on January 19, 2016.

Caren Zucker is a 25-year veteran of ABC News, and producer and co-writer of the PBS Series "Autism Now." Her forthcoming book written with Jon Donvan, "In a Different Key: The Story of Autism," will be published by Crown on January 19, 2016.