Bring back the Jay Leno and David Letterman feuds: What's lost in the nice, new late-night of Colbert, Fallon and Kimmel

No one fights over guests and viewers any more. That's sweet, but also makes late-night a celebratory boys' club 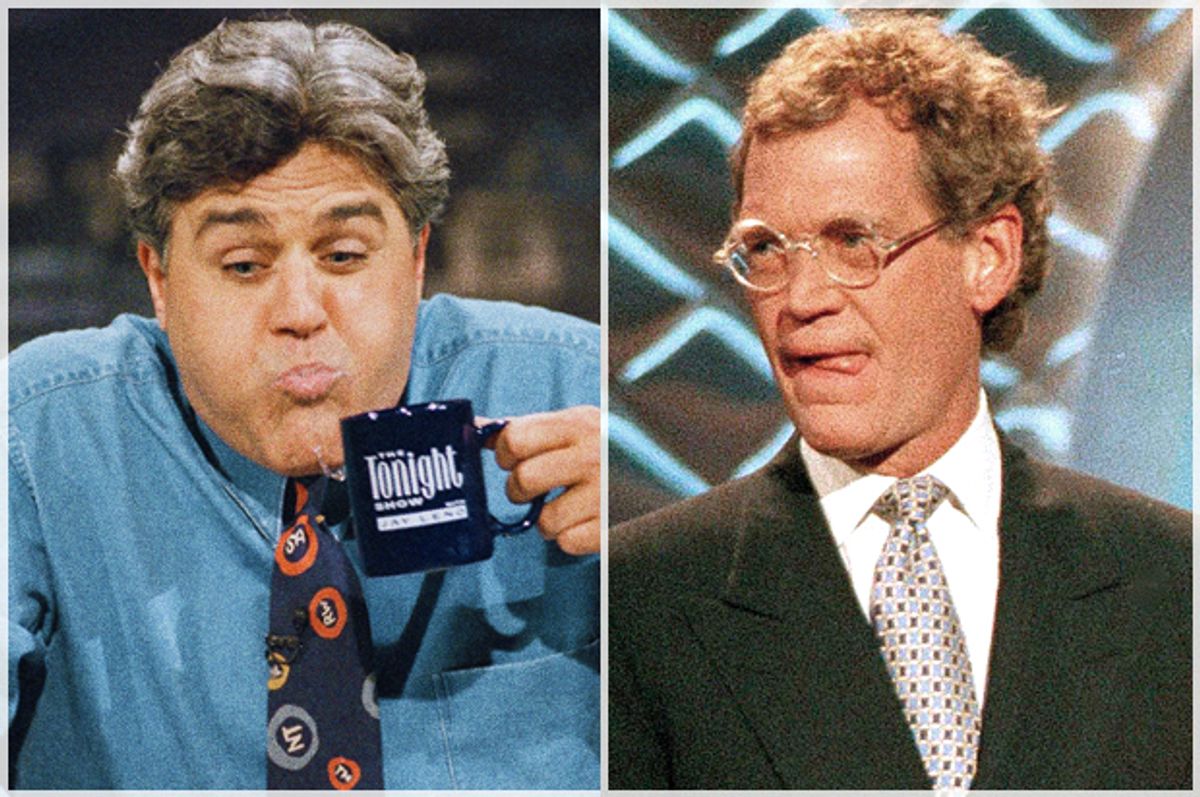 When Stephen Colbert took over “The Late Show,” some wondered if he would now begin feuding with network rivals Jimmy Fallon and Jimmy Kimmel. Given the historic feud between Jay Leno and David Letterman, then between Kimmel and Leno, late-night comedy had come to be defined, in part, by attention-getting fights rivalry. Leno once said that rivalry would make late night “more exciting.”

Now over one month into Colbert’s new show, we can note a new era in late-night comedy: One that is more defined by bromance than feuds. What does this new vibe mean for late night?  And what should we make of it?

The story of Colbert’s connection to Fallon is almost the direct opposite of the Leno-Letterman feud.   From the start the two seemed to truly enjoy joking about their competition. When Colbert hosted “The Colbert Report” he had a long history of pretending to be rivals with Jimmy Fallon. They pretended to fight over things like which host had a better flavor of Ben and Jerry’s ice cream and they actually raised money for charity during a "feud" that ended with Colbert and Fallon singing together on Fallon’s show. When Colbert was announced to replace Letterman, some wondered whether the playful connection could continue, given that they would now compete for the same viewers and guests. Those worries were allayed, though, when Fallon appeared on Colbert’s debut to wish him well.

Until last week, when Kimmel was a guest on “The Late Show,” there had been no real interaction between Kimmel and Colbert. During Kimmel’s interview, the two comedians discussed the fact that everyone expects them to be at war. Kimmel dismissed the idea outright: "It's a weird thing. I think it was established with Letterman and Leno and people thought it would just continue like the Crusades.” He then went on to say that he might "might even love" Colbert: "If you died, I’d cry like a baby.”

Then viewers learned an interesting fact that certainly affects the bromance story. Both Colbert and Kimmel share the same agent: James “Babydoll” Dixon, who also represents Jon Stewart, Adam Carolla and Carson Daly. As Colbert and Kimmel discussed Dixon, they referred to him as the true “king of late night.”

This leads us to the real feature of the late night wars that has shifted since the Leno-Letterman era: the industry is different today. First, with consolidation of the media industry, we now have a case where the same agent works for two network hosts. Imagine if Leno and Letterman had had the same agent negotiating contracts for both of them. The story simply would not have been the same.

The even bigger shift, though, was referenced by Colbert moments before Kimmel sat down for the interview.  Colbert told viewers they could watch Kimmel every night “at 12:35 on your DVRs.” When Letterman and Leno went at it in the 1990s, viewers literally had to choose which one to watch. That era is over. As Time reported last year, “fewer people than ever are watching TV.”  This is especially true of the millennial demographic, which prefers on-demand viewing over linear television. Less than half of millennials watch live TV at all. Shows that air during the same slot simply don’t have to compete, especially if many of their viewers will be watching them the next day over their morning coffee.

The fight over guests is mostly a thing of the past too, especially in the realm of political guests. Late-night television has simply become a staple for politicians. Those appearances lead to social media bumps that far exceed an appearance on a news program. Research showed, too, that candidates that appeared on “The Colbert Report” got bumps not just in polls but also in donations. Nabbing a political guest is no longer a big deal. If anything, it is the opposite. Politicians vie to get airtime with as many shows as possible. Sure, the shows compete to get the most viral interview, but they aren’t in the same race against each other for the guests themselves.

The good news for viewers is that the sense of loyalty that was ushered in by the linear TV era of the Leno-Letterman feud is a thing of the past. Viewers can sample their comedy and watch bits from a range of shows. It means that rather than be bogged down in personality disputes, viewers can benefit from the sharp sarcasm of Larry Wilmore and the goofy charm of Fallon. They can appreciate the long-form satire of John Oliver and the interview strategies of Colbert. They can have it all.

The end of the late-night feuds is overall a good step in late-night comedy, but there is a downside as well. It is worth asking what happens when the comedians are no longer being critical of each other. Powerful comedy needs a baseline of critique for it to have impact. If everyone plays too nice, then the comedy lacks needed bite.

We got a glimpse of this in a series of videos released by Vanity Fair and Conde Nast that focused on Colbert’s debut. In a companion piece, Vanity Fair highlighted the comedians they claimed were redefining the genre: Colbert, Fallon, Kimmel, Wilmore, Oliver, Conan O’Brien, Seth Meyers, James Corden, Trevor Noah and Bill Maher. The videos show the comedians giving Colbert advice, acting out impressions of one another, group texting and talking about pets. If they had really wanted to shake things up, they might have also included Lee Camp from RT America. But instead, the videos were silly and self-congratulatory, smacking of frat boy backslapping more than smart comedy. One even ends with Wilmore laughing at the “dick pic” he has sent to all of them.

The point is that gathering all of these guys together in a love fest does actually lead to some pretty dumb comedy. The end of the feud era is great, but the bromance is a bit nauseating. And while feuds are no good, blind adoration is a problem too. When that blind adoration is part of a boys club, it is even worse. As Vanity Fair points out, “How gobsmackingly insane is it that no TV network has had the common sense — and that’s all we’re talking about in 2015, not courage, bravery, or even decency — to hand over the reins of an existing late-night comedy program to a female person?”

While it is refreshing to consider an era when feuds are a thing of the past, it is worth questioning the impact of a comedy landscape that is too congenial — and too male.