In U.S.-backed Gulf regimes, you face years in prison -- or execution -- for insulting the king

Pro-democracy activists in U.S.-allied Gulf monarchies are brutally punished for writing poems or ripping up photos 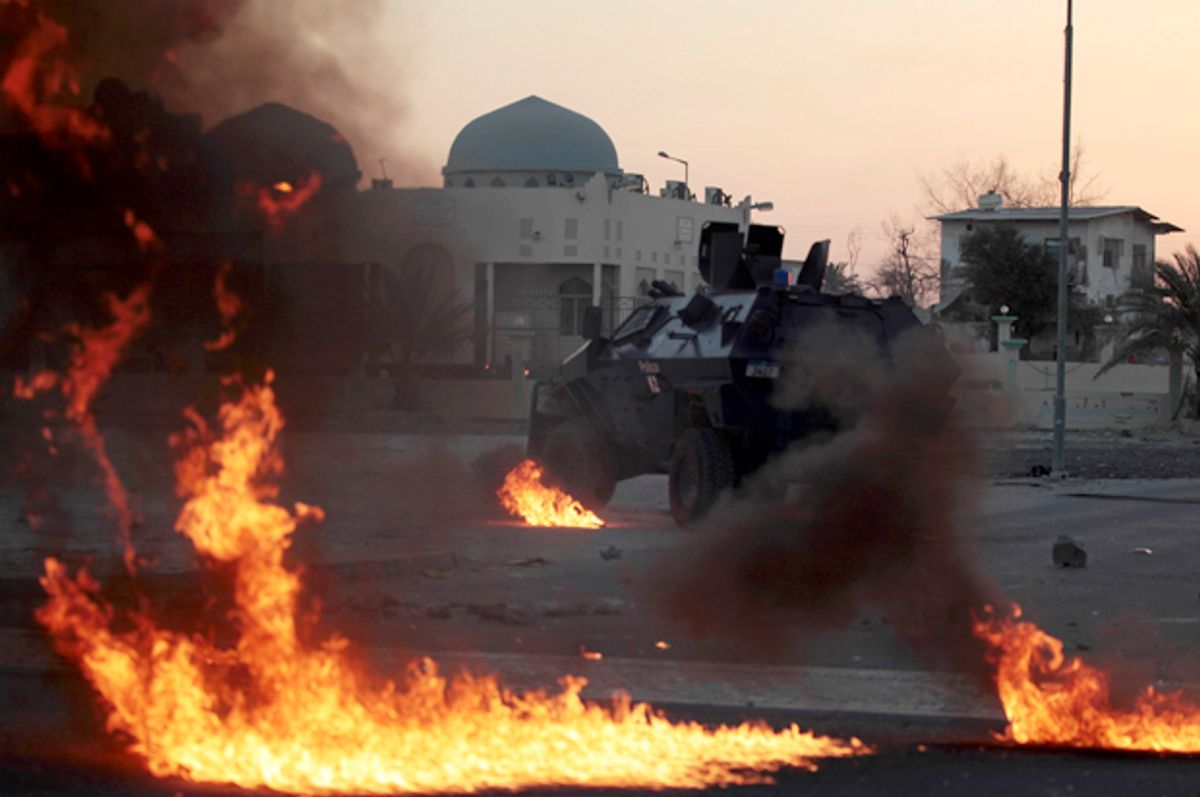 "When the character of a man is not clear to you, look at his friends," goes an old Japanese proverb. This gem of wisdom serves as a good rule of thumb in life -- not just for individuals, but even more so for states.

The U.S. constantly presents itself as the world's beacon of freedom and democracy, but its allies are anything but. In fact, America has for many decades aligned itself with some of the most dictatorial and repressive regimes in the world: the Gulf monarchies.

On Oct. 20, the U.N. urged the Qatari regime to release Mohammed al-Ajami, a poet who was sentenced to 15 years in prison for speaking negatively of the royal family. Al-Ajami was arrested in 2011 for reciting a poem in his house that criticized the prince of Qatar and lauded the pro-democracy Tunisian Revolution.

Qatar's absolute monarchy first considered executing the outspoken poet, but decided to be a bit more generous and instead just throw him in a dungeon for the rest of his life. An appeal in 2013 reduced the sentence to a much more charitable 15 years.

U.N. Special Rapporteur on freedom of expression David Kaye warned that the imprisonment of al-Ajami is an affront to "the peaceful exercise of his fundamental human rights." Special Rapporteur on the independence of judges and lawyers Mónica Pinto added that the lengthy "prison sentence against this poet is also particularly worrying, as we have received serious indications that the criminal process did not meet all the judicial guarantees of a fair trial." What exactly a "fair trail" means in the first place, when someone is arrested over a poem, is something worth further deliberation.

The next day, on Oct. 21, Bahrain's monarchy sentenced human rights activist Zainab al-Khawaja to a year in prison and fined her thousands of dollars for ripping up a photo of the king. She had originally faced a three-year sentence for the peaceful protest.

Human rights organization Amnesty International blasted the Bahraini regime for the punishment. Deputy Director for the Middle East and North Africa James Lynch said the court's decision "is a vindictive assault on freedom of expression and offers yet another example of the Bahraini authorities' use of oppressive tactics to silence peaceful activists."

Al-Khawaja has been hit with a variety of other charges for similar non-violent acts of dissent. In the past four years, she has been arrested and detained numerous times.

Her father Abdulhadim Al-Khawaja, himself a renowned human rights activist, was sentenced to life in prison for helping lead peaceful pro-democracy protests in 2011.

This is barely scratching the surface of human rights violations in these Gulf nations.

In the past few months, Saudi Arabia has planned to behead and crucify -- yes, you read that right, crucify -- pro-democracy youth activist Ali Mohammed al-Nimr. The U.K.'s foreign secretary met with the Saudi regime, pressuring it not to nail the peaceful activist to a cross. He claims he persuaded the absolute monarchy to not execute the young man, characterizing it as a victory for diplomacy. We live in a world where activists not getting crucified by Western allies over peaceful protests is considered a "victory for diplomacy."

Al-Nimr's family, however, warns that their child could be executed "at any moment." And, if he is, Saudi Arabia refuses to inform them, forcing them to keep their eyes glued on the TV in absolute despair.

The Saudi regime -- whom the U.S. fondly refers to as a "close ally" -- executes someone, including children and the mentally ill, every two days on average, often by beheading.

Slavery is also widespread in these Western-backed monarchies, where millions of foreign workers, largely from impoverished countries in South Asia and elsewhere, toil for long hours in dangerous conditions with little-to-no pay (many are trapped in debt schemes).

Modern-day slaves, who outnumber the native Gulf populations, build advanced, technological economies while a small royal elite rakes in billions upon billions of dollars. In Qatar, these indentured servants are breaking their backs -- literally -- in the construction of stadiums and facilities for the 2022 World Cup. A 2014 report conducted by the International Trade Union Confederation estimated that "at least 4,000 people in total will die before the start of the World Cup in 2022."

Why is America, the soi-disant beacon of freedom and democracy, aligned with these tyrannical feudal regimes?

In the case of Bahrain, the State Department's message is loud and clear: The monarchy "plays a key role in regional security architecture and is a vital U.S. partner in defense initiatives," the department says. "Bahrain hosts the U.S. Navy's Fifth Fleet and participates in U.S.-led military coalitions."

In the case of the other Gulf states, the primary answer is just three letters long: Oil.

Qatar, the UAE, Kuwait, and Saudi Arabia have some of the world's largest oil reserves -- and given the tiny size of many of them, they are among the most oil-dense regions on the planet.

In the global economy, cheap and plentiful oil takes great precedence over freedom and democracy, yet alone basic human rights.