Ouch! Megyn Kelly has no time for Jeb Bush: Fox News anchor dismisses him on 9/11 and Trump

WATCH: In an amazing low-energy performance, Fox News anchor challenges Jeb on 9/11 and Trump. He snoozes... 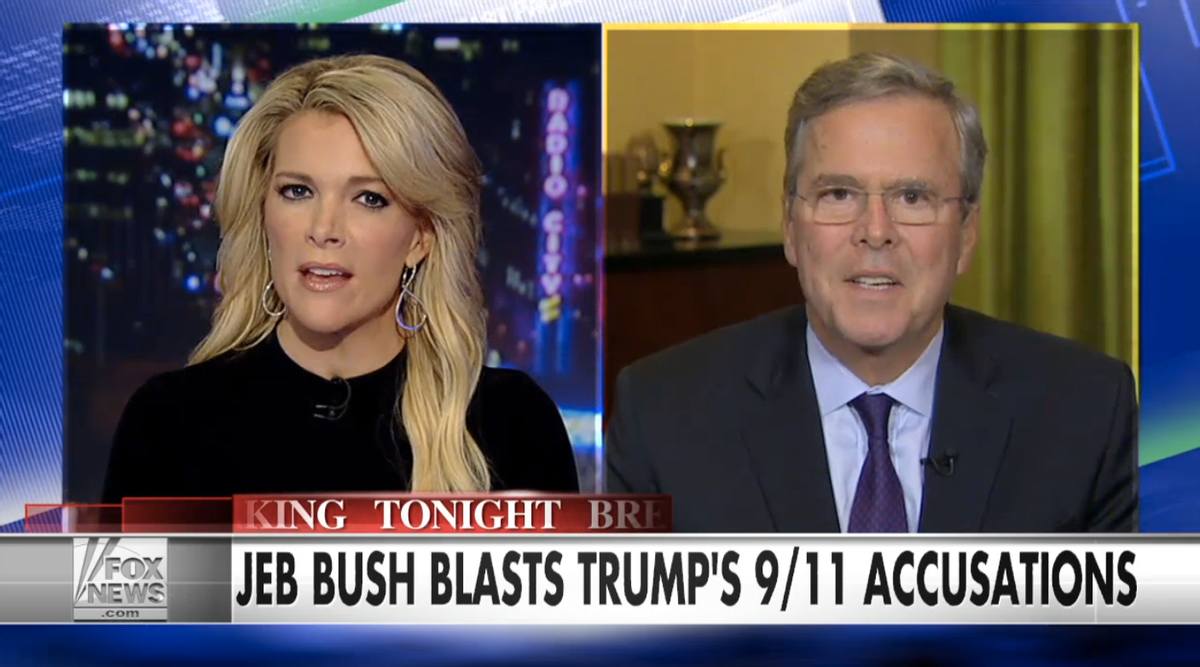 Jeb Bush has evidently never seen the memo given to George W. Bush in August 2001 about Osama bin Laden's determination to attack the United States and perhaps hijack airplanes.

He went on Fox News last night to criticize Hillary Clinton over #Benghazi, but Megyn Kelly wanted to know why it was right to criticize Clinton for the deaths in Libya, but not his brother for the deaths on September 11. He insisted there was no double standard."Not at all because if someone had evidence that there was a pending attack, there was -- a lot of investigations after 9/11, if there was evidence that there was an attack that was pending and no one acted, of course there were have been criticism, but that's not the case."

Let's pick up the transcript:KELLY: You know they're arguing that there was. Trump argues George Tenet, offered a warning that the attack.BUSH: Trump doesn't know what he's talking about. Trump doesn't know what he is talking about. He doesn't know anything about this. And he doesn't know what he's talking about. There were massive investigations of this, there were hearings. And where we -- did we let our safeguards down? Sure, we did. I mean under the Clinton administration, it was the law enforcement operation. But -- in the case of Benghazi, there were clear signs that this consulate was at risk. It had already been attacked. It was 9/11, there wasn't the security. And I think the investigation -- the testimony today bears that out.KELLY: What did you make of Hillary's testimony today?BUSH: She is not accepting responsibility. Two weeks ago in the debate, she said that Libya was a great example of smart power. Well, I think it's in total chaos now. And leading from behind was not the best way to deal with this problem and the security problems that exist, created a tragedy for American lives lost. And so, this was not a great day for the Clinton department of state, for sure.

Later, they talk about Donald Trump's success and Kelly suggests he has no plan for how to deal with Donald Trump's chiding. Bush fires back that the two of them are in the same boat -- but Kelly reminds the former governor she is not the one running for president.Watch the video below -- and wait for the amazing "Mm-hmm" when she asks Bush about how he'll win the nomination near the end: