The tragedy of the Barney Frank film: Watching Congress fall apart before our very eyes 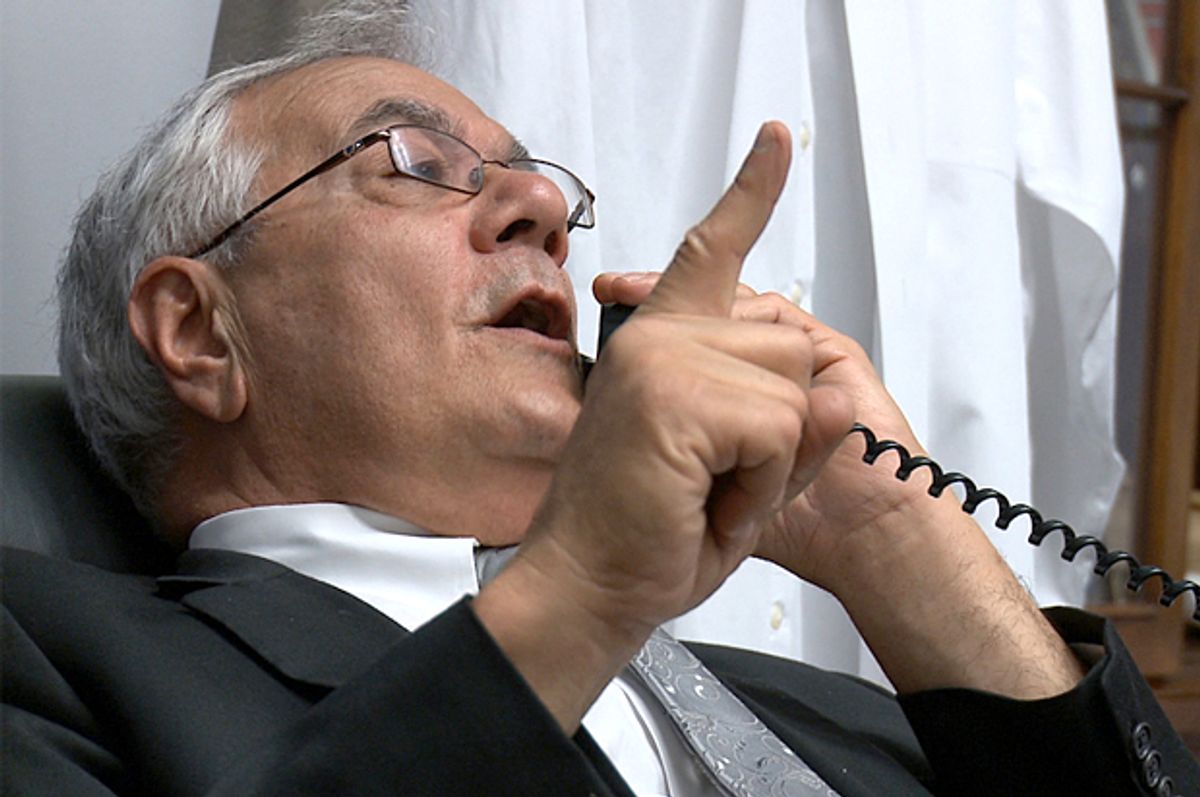 As a documentary, “Compared To What: The Improbable Journey Of Barney Frank” is not, frankly, amazing. It’s enlightening, but rarely serves as more than a rah-rah rally for Rep. Frank, who is the subject and source material for the film. It’s welcome cheerleading if you’re a fan of Frank as a politician — and there are times the documentary does some desperately needed truth-telling about the financial crisis of 2008 and the current intractable state of Congress. But the 90-minute documentary that premieres on Showtime tonight is too sweet and rosy to really be a work of journalism; if documentaries are supposed to be investigative, this is the filmic version of a puff piece.

It’s still an engaging enough documentary for anyone interested in Frank, Congressional politics, or most of all, gay rights in the center of government. Frank came out while serving in the House of Representatives, and he managed to weather the homophobia of the era and a minor scandal to keep his seat in his home district of Newton, Taunton and New Bedford in Massachusetts. Frank served for 32 years, leaving office in 2013. The documentary follows his last days in office: from the first election in decades where he hasn’t been on the ballot, through his marriage — the first same-sex marriage of a sitting Congressperson — and finally to an uneasy retirement, where he still makes calls, argues politics and campaigns for fellow Democrats.

Frank is a fantastic subject, because he is (seemingly) unable to be inauthentic. The congressman has a national profile because of his bluntness, humor and dogged determination — he would not back down either during questioning in his House subcommittee or during a televised interview. He’s constantly quotable, even just in the 90-minute documentary, quipping, “Vote Democratic. We're not perfect, but they're nuts” when campaigning for his replacement, Joe Kennedy III, in 2012. And it’s not just bluster and jokes — he tears up at grand occasions, including statements on the House floor, press conferences and his own wedding. Outside of chambers, his shoes are untied, he runs into walls, his hair and clothing are bound to be askew. On the floor, he’s in his element, engaging in the back-and-forth repartee of House debate with a rowdy, brash enthusiasm that is the epitome of politics in the lower house.

“Compared To What” is particularly interested in Frank as a gay man, because of his openness about it so early in the conversation and his relentless support for gay rights, even when it was really not politically expedient. It offers a surprising and moving portrait of his experience, especially in the years before he would even admit he was gay to his closest friends. That Frank survived coming out in the House is a testament to how beloved he was, even by his political rivals; he was (and is) a consummate politician, able to build alliances across the aisle while holding firm to what mattered most to him. “Compared To What” reveres him for this, framing it as both integrity and pragmatism. But the focus comes at the expense of letting the viewer decide for themselves how well Frank’s approach succeeded in government.

Indeed, even as someone who has no ideological faults with Frank, the framing of the documentary is at times rather suspicious. Unsavory details are glossed over, with just occasional lines of text explaining hiccups or digressions in Frank’s career. As is probably to be expected, the film is stacked with character witnesses; only one person dares to utter a cross word on Frank, and that is Oscar-winning writer Dustin Lance Black, who organized a national day for gay equality that Barney Frank wouldn’t endorse. Not because he didn’t agree, but because it was happening at a time when Congress was on holiday, and Frank didn’t see the point. As notes of dissension go, it’s a rather adorably crochety one. “Compared To What?” goes even further — it hauls in an expert on the financial crisis to defend Frank’s actions related to Fannie Mae and Freddie Mac. And while Frank’s scandal — that a prostitute he hired, who eventually became his driver, ran a prostitution ring out of his apartment — is explained in lines of perfunctory text, Frank’s apology speech for the scandal is given its own scene. In the eyes of this film, the man could do no wrong. And perhaps he couldn’t, but 90 minutes of repeating the same thing is a bit tiresome.

What’s more interesting in “Compared To What” than the Frank adulation is the history of federal government it offers over his career — specifically, a history of the House of Representatives, and its gradual inability to function in any meaningful fashion. The documentary lays the blame at the feet of Newt Gingrich, and whether or not that’s true, it offers compelling insight into how much the atmosphere of even Frank’s financial services committee turned acrimonious, even with legislators he’d worked with for 20 years. The film pieces together news coverage of Frank and Congress starting from the ‘70s, from black-and-white photography to color. Clips and excerpts from commentators as diverse as Rachel Maddow, Charles Krauthammer, Jon Stewart and Bill O’Reilly make it into the documentary, as well as one-on-one interviews with Frank’s political friends. It recalls an image of a Congress that used to at least occasionally do things, as opposed to our own. It’s certainly not a Congress that has a place for Frank anymore.

The title of the documentary comes from a joke often repeated by Frank himself — from a Borscht Belt comedian cracking wise about the old ball-and-chain. The setup: "How’s the wife?" The answer: "Compared to what?" Frank explains that he used the semi-rhetorical question as a guiding principle for his politics — pushing him for solutions, not ideology; practicality, not principle. And though the documentary did frustrate, at times, with its feature-length heart-eyes-emoji directed at Frank, partly I think it’s because the filmmakers were caught up in the title of their own documentary. Sure, Barney Frank might not be perfect. But compared to almost everyone else in this Republican-controlled Congress, he seems like the last sensible man standing — and woe is us, because he just left the building.