The Freedom Caucus has co-conspirator: A compliant media that prints what it's told, no matter how wrong or insane 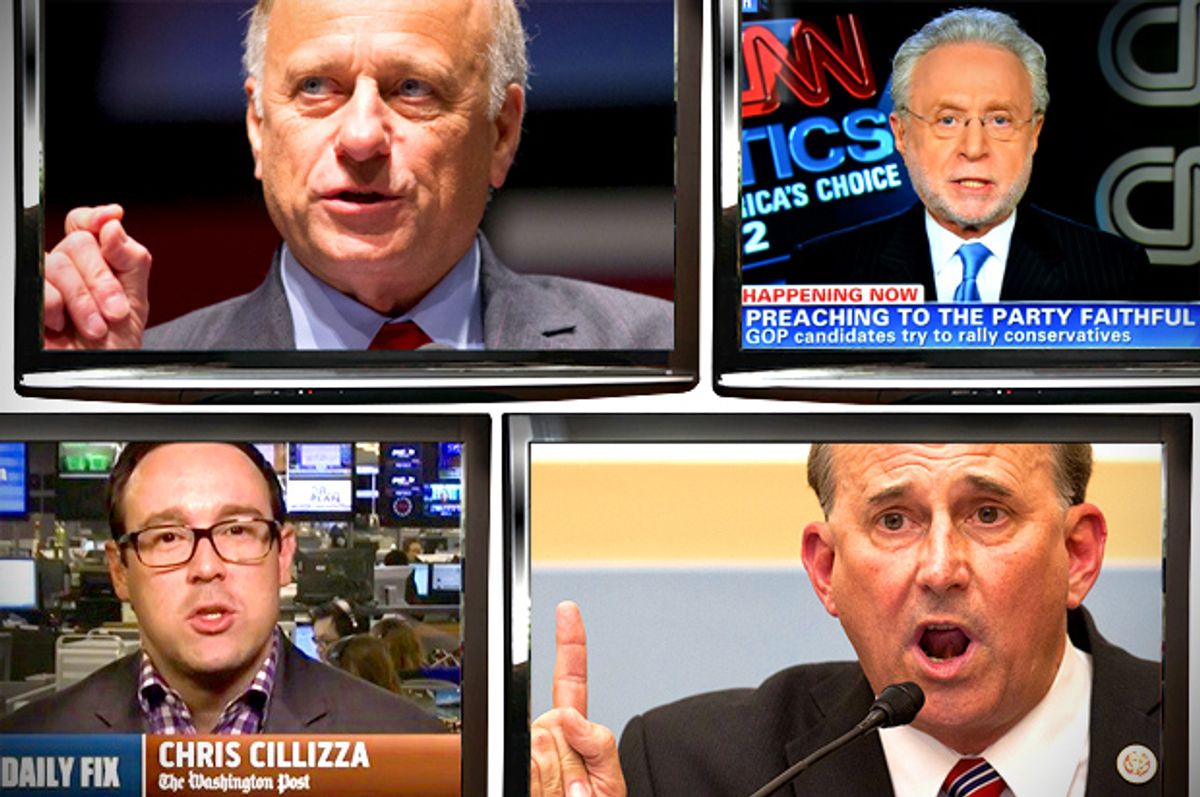 In their 2012 book, "It's Even Worse Than it Looks: How the American Constitutional System Collided With the New Politics of Extremism," Thomas Mann and Norm Ornstein argued that America's political dysfunction had two causes: First, the mismatch between our constitutional system, requiring compromise, and our increasingly polarized, parliamentary-style politics. Second, the fact that polarization has been asymmetric, turning the GOP into an insurrectionary anti-government party, even when in power. They wrote:

The Republican Party has become an insurgent outlier -- ideologically extreme; contemptuous of the inherited social and economic policy regime; scornful of compromise; unpersuaded by conventional understanding of facts, evidence and science; and dismissive of the legitimacy of its political opposition.

Despite overwhelming historical data showing asymmetrical polarization in Congress (more recent additions here), their argument did not convince the anecdote-obsessed Beltway pundit class, with its deep belief that “both sides do it,” no matter what “it” may be. It's true there are “extremists on both sides,” but as this Wonk Blog post showed, the percentage of non-centrist Republicans skyrocketed from under 10 percent in the Ford years (less than Democrats) to almost 90 percent today, while the Democratic percentage has stayed basically flat [chart]. What's more, in the last session (2013-2014), the data shows that 147 House Republicans — more than half the caucus — were more ideologically extreme than the most extreme Democrat in the House. There is simply no comparison between the two parties. Asymmetric polarization is not only real, it's one of the most dominant facts of American politics today.

But it's a fact that “balanced” journalism has to ignore. To admit that the political world isn't balanced would shake their whole belief system to its core. And yet, the shaking seems to have begun. As dysfunction in the GOP has reached new heights, not just threatening America and the global economy, but the party itself (both in Congress and the presidential race), the power of that denial may have begun breaking down, as Republican politicians are now criticizing their own party for what it has become, with conservative pundits like David Brooks castigating the GOP for its “right-wing radicalism.”

So it was only natural for Bloomberg View to engage in an email Q&A with Thomas Mann and Norm Ornstein, "Republicans Gone Wild," bringing their perspective to bear on where things stand today.

Ornstein first pointed out that the current state of crisis — both in Congress and in the presidential primary — had predictable roots in past strategic moves, heedlessly initiated by party leaders who were now reaping the whirlwind. This basically reverses the order of causation proposed by critics, like Chris Cillizza, who argued that GOP congressmembers were simply following the spontaneous rightward movement of the folks back home:

The fact is that the "Young Guns" -- Eric Cantor, Kevin McCarthy, Paul Ryan, as we wrote early on in the book -- actively incited anger and raised expectations among populist Tea Party adherents when they went out in 2009-2010 and recruited candidates to run in the midterms. They told them to use the debt ceiling as an issue and to promise to bludgeon Obama with it to force him to his knees, to repeal Obamacare and cut government dramatically. They promised that if they took the majority they would immediately cut spending by $100 billion.

Of course, the American political system doesn't work like that. Parliamentary systems do. But not presidential ones. For folks calling themselves “constitutional conservatives” this was a pretty fundamental moment of “Oops!” Continuing:

That led to the debt limit debacle in 2011, when they finally backed down at the brink -- after Jason Chaffetz, whom we quote in the book, led the charge to take the country over. And the promise of $100 billion in spending cuts went unfulfilled. The combination of empty threats and unfulfilled promise, amplified by tribal media and social media, has created both a broad public anger at Republican establishment leaders among more radical Tea Party voters, and a seething anger among the 40 to 50 most radical House members at their own leaders for their fecklessness.

The wild promises that the “Young Guns” made played a key role (along with outside groups and money) in winning GOP House control in 2010, but they were always utterly unrealistic — a minor detail that no one inside GOP leadership seemed to notice or care about at the time. One could argue that after 30 years of supply-side, trickle-down mumbo-jumbo they'd become completely adapted to living in fantasyland. How were they to know that this time they'd be getting their fair share of the resulting pain? (An early 2014 report concluded that “lurching from government breakdown to breakdown” had already significantly damaged the U.S. economy, resulting in an additional 750,000 unemployed.)

After that, Mann added:

Norm's response underscores the reality of asymmetric polarization, which the mainstream media and most good government groups have avoided discussing -- at great costs to the country. [Emphasis added.] As we wrote, Republicans have become more an insurgency than a major political party capable of governing. Their actions in Congress in recent weeks and on the presidential campaign trail underscore this reality.

But I would go even farther than Mann regarding the media. Their stubborn adherence to a false balance narrative has, ironically, become an integral part of the GOP's relentless rightward push. By talking about "government dysfunction" instead of "Republican obstruction," the media actively helps the most extreme anti-government Republicans thwart any efforts at competent governance and it helps promote their "government is horrible" worldview. It normalizes the abnormal, even the bizarre.

There was once a penalty for becoming too politically extreme: one's actions would be characterized as unrealistic, destructive, heedless of past experience, etc. Sometimes this was justified, sometimes not (as with the Civil Rights movement). But right or wrong, this media practice inhibited radical movements in either direction. For quite some time now, however, conservative Republicans have realized that by moving right and attacking the media for any criticism, they can turn the media into a tacit ally, forcing them to treat preposterous claims as serious ideas, or even proven facts. Thus, when they were planning to force a government shutdown, a key part of their strategy was spinning the media with a preposterous argument that it was the Democrats who were shutting down the government, even though, as the New York Times reported, the shutdown plan traced back to a meeting early in President Obama's second term, led by former Attorney General Edwin R. Meese.

In fact, at the time of the shutdown, in October 2013, I wrote a piece, “'Balanced' coverage ignores nine reasons why the shutdown is a GOP Idea” in which I argued:

[P]erhaps the single greatest asset the GOP has on its side is the so-called "liberal media," with its ideological bias toward "balance" that prevents it from honestly reporting that the shutdown is a entirely Republican creation — which would dramatically intensify the pressure on Republicans to fold.

Far from producing accurate, objective reporting, the media's adherence to “balanced” reporting blotted out almost all relevant history. The nine reasons I cited were:

1. The longstanding GOP fixation on shutting down the government.

2. The GOP's creation of the shutdown crisis by blocking the budget reconciliation process.

3. The emergence and evolution of the incoherent Ted Cruz/Tea Party plan to force a shutdown over "Obamacare."

4. The record of prominent Republican politicians and others who repeatedly warned against forcing a government shutdown — including many who are now trying to blame the Democrats.

5. The contrary historical record of some Republicans downplaying the severity of the shutdown.

6. The record of drastic Democratic budget concessions embodied in the "clean CR" [which Republicans rejected].

7. The polling evidence that only GOP base voters are opposed to political compromise — and are indifferent to crisis.

9. The framework of American legislative history.

This was just one example, but the point is true in general: “Balance” does not ensure a clearer, more honest, more complete, more objective picture of the relevant facts — especially in current circumstances.

The GOP's strategic logic is simple and straightforward: If the media is going to split the difference between what Democrats and Republicans say, then if Republicans simply double their demands, suddenly the media, embracing the “sensible center,” will now articulate the old GOP position as the “sensible center,” the “common sense” place to be. It will also adjust its reporting of “facts” accordingly, screening out all the facts that would once have made the Democratic position seem reasonable or plausible, and bringing in new “facts” — such as the GOP canard that it was really the Democrats who wanted to shut the government down. What's more, once the media plays along, it's a trick that can be used over and over again. One can keep moving farther and farther right indefinitely, pulling the “objective” media along for the ride, every step of the way. (Conservatives even developed an operational model to describe the process, known as the “Overton Window,” explained by a conservative activist here.)

The basis for all this is a cultural illusion that the “nonpartisan” media is somehow objective, philosophically in tune with science. But historically, this is far from true. Up until the late 19th century, American journalism was quite partisan, serving substantial “niche” audiences, sustained by subscriptions. When advertising exploded as a revenue source in the early 20th century, a new journalistic model emerged, trying to appeal across parties, while taking care not to anger large advertisers. The broader story is well told by Paul Starr in "The Creation of the Media," while Jeremy Iggers incorporates this history into his account of how journalism ethics confuses the purposes of journalism in "Good News, Bad News: Journalism Ethics and the Public Interest."

One of the most persistent critics of the “balanced journalism” that results is James Fallows of the Atlantic magazine, in his ongoing “false equivalence” blog posts, begun in 2012. One such post, quoting from correspondent Shreeharsh Kelkar at MIT, references Starr's work, along with the concept of “boundary work,” which Kelkar describes as “a kind of rhetorical work that is performed in public argument: something is asserted to be science by stressing what it is not.” He goes on to say:

I think this kind of boundary work exists in journalism too... it's what you call false equivalence (and Yglesias calls bipartisan think). Here the newspaper is seen as above politics, which is what grubby politicians do.

Such is the basis for the media's claims of “objectivity.” Starr's history explains the forces leading to why this happened. And Kelkar goes on to note that these forces are changing once again, corresponding with another change in outlook:

Interestingly enough, we're now back in more partisan times, thanks to the Web. And it's interesting to me that you, Matt and others who call the editorials on their false equivalence operate in a completely different new media ecosystem.

The one thing missing from this account is that partisan, ideological and other niche journalism (black newspapers, for example) never went away, although they were pushed toward the margins. But they continued to play important cultural and political roles, especially for movements locked out of power, struggling to find their way in. In this very real historical sense, the blogosphere's origins were not just Usenet, email lists and the like, they were also the underground press tracing back to IF Stone's Weekly and George Seldes' In Fact; the black press, both commercial and movement-based; political journals of the left and right; and so on. These underappreciated traditions provide largely untapped examples of how to do quality political journalism outside of the artificial construct in which false balance is rooted. They point the way forward for us, beyond our current state of asymmetrical dysfunction.