My Creation Museum quest: A skeptic's genuine search for faith, science and humanity in a most unlikely place

It's easy to mock and criticize the Creation Museum. We also need to understand the worldview of those who visit 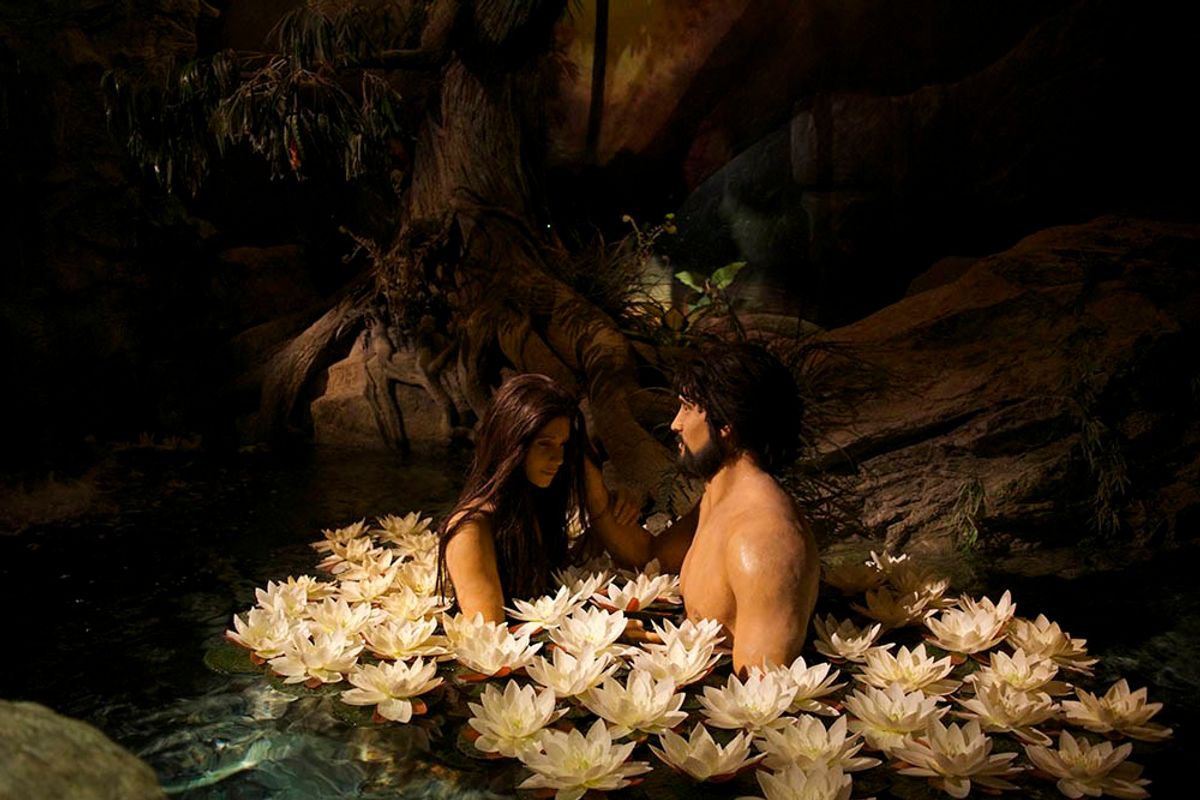 The town of Petersburg, Kentucky, sits quietly at the mouth of the Midwest. The Ohio River snakes around the borders of the scant, 620-person town, separating it from the state of Indiana immediately north, and Ohio slightly northeast. Streaks of smoke hang lazily among the clouds, stretching into the sky from the coal power plant just to the south. Ranch and split-level homes stand plain before acres of flat pasture. The silhouettes of lonesome billboards dotting the highway are as close as the town comes to a skyline. One gets the impression that a gaze out of a Petersburg window today would reveal the same landscape that existed a hundred years ago.

In 2001, however, the town saw something new. A non-profit, fundamentalist Christian apologetics ministry called Answers in Genesis (AiG) broke otherwise untroubled ground in Petersburg, in the construction of what the group would later call the Creation Museum.

The multimillion-dollar testament to a seemingly invaluable faith did not come without a fight. AiG filed several suits in order to develop the plot of Boone County land the way that they wished, with the apparent strategy being to litigate until their opponents gave up.

From planning to construction, the 60,000-square-foot museum took nearly 10 years and $27 million to complete. The museum opened to the public in 2007, and according to AiG officials surpassed its annual attendance projection of 250,000 visitors within five months.

An array of extravagances — such as a planetarium, raptor-themed zip line, biblical-era petting zoo as well as dinosaur and insect skeleton collections — await Creation Museum visitors, as does friendly service. If hired permanently, museum employees must sign a “statement of faith” affirming their beliefs in AiG’s principles. The workers always smile as they greet guests.

They smile as they remind visitors that their tickets — which have just gone up from $5 to $29.95, officially due to gas hikes and a poor economy — are good for two days.

They smile as they offer Noah’s Café patrons a souvenir mug, featuring information on the real age of a T-rex (created on Day 6, approximately 4004 BC) for $6.99, which includes free refills all day.

They smile even more as they guide guests into a lecture hall for an hour-long talk on the physical existence of a “mitochondrial Eve.”

Once inside the hall, they smile as they remind visitors that Adam, Eve and Jesus were all real people; that all visions offered by the Bible are real, and that to abandon this real word — even a select passage or two — is to slip into an ugly, graffiti-covered world of depravity and sin.

Beneath that smiling is fear.

In Georgia Purdom’s talk on Mitochondrial Eve — in which the PhD-holding research scientist invokes science to prove that the biblical Eve did exist — she expresses concerns about the future.

“Among Christians today,” Purdom says, “there is an increasing debate over whether or not Adam and Eve were real people.” Audience members collectively lower their chins and furrow their brows in deep consternation. Some clap their hands in frustrated agreement.

Purdom then evidentiates her case by presenting slide after slide of popular Christian publications whose editorial staff, before a continuously sophisticating science, have interpreted the Bible with a more scrutinizing eye. Based on the science, these publications say, certain passages of the Bible can no longer reasonably be considered as literally true. Perhaps, they add, we too should evolve with the times. Purdom pauses, waiting for her audience to be hit by that rhetorical anvil.

To Purdom and her peers, these developments are not mere annoyances; they warn that faith is something mortal, and is thus something that can die — or be killed by a hungrier, leaner species than they. In their eyes, a predatory science has sniffed out the flesh of the faithful, forcing them to contort and camouflage their beliefs in order to survive.

For Purdom, the less-devout have already ceded their values to the demands of a new reality, and yet the appetite of science remains insatiable. They, the defendants of a truth unchanging, are under attack. If the Word is to live, if its believers are to have purpose, it is up to institutions like Answers in Genesis to save it, and likewise a guiding, collective morality. In a world abandoning the totalizing austerities of faith for the boundless frontiers of science, the Creation Museum must stand in defiance. And it does.

And yet, by erecting a physical space to enshrine their faith as fact, they follow in the footsteps and theories of their scientific opponents: In constructing the Creation Museum, the fundamentalists too participate in natural selection, albeit of the curatorial kind. But they certainly won’t admit it.

Under this lens, it is too easy to dismiss the Creation Museum as yet another ornament on the fundamentalist’s heavy-limbed Christmas tree. It is likewise puerile to laugh at their depictions of an early human grazing among dinosaurs as simply “crazy.” A closer look at the Petersburg attraction reveals that the questions raised in the museum are deeply existential, and ones which are steeped in — and troubled by — an atheistic logic: If it is indeed true that Adam and Eve did not literally exist, as science says, then there is no original sin. If there is no original sin, then Jesus did not have to die for it. If Jesus did die, but not for our sins, then why is he our savior? If he is not our savior, then what is he? What are we?

Viewed this way, the Creation Museum becomes less of a clearly demarcated home for the irrational, but rather a metaphysical space for individuals deeply troubled by emerging forms of authoritative rationality. The museum complex, which sprawls over dozens of acres, is less of an amusement park for fanatics and more of a fortress for the vanishing fearful. It is a space where the likeminded can physically enter a mindset that they know, and that they worry — if science has anything to say about it — might one day become unknown. Questions of social justice, evolution and humankind’s place in the universe are answered here — and usually in 150 pages or less. Indeed, the Creation Museum offers itself as a vital, life-affirming buffer against the spiritually weathering effects, and warnings, of coming worlds.

And yet, this sequestered space has the potential to greatly impact public life. As with any place of refuge, the Creation Museum wraps its guests in safety to revitalize their spirits. Fundamentalist views — anti-gay, anti-abortion, anti-evolution — are not challenged but embraced, and promoted, here. And lest we forget, it was AiG president Dr. Ken Ham who galvanized climate skeptics around the country in his widely viewed debate with popular science icon Bill Nye at a time when carbon parts per million hover at historically high levels, and residents of low-lying, often-poor coastal areas are living through the effects of climate change as we speak.

But no matter; this is a place of answers, not complications. The gilded pages of the Bible manifest themselves three-dimensionally, with a white Adam and Eve locking their heterosexual limbs in a short film and life-size exhibit. With every vision of a sharp-mouthed woman or a gun-toting minority, guests’ fears of living within a fallen world are drawn out, and legitimated, with equal precision. Visitors’ faith, as anatomized by AiG’s so-called academics, is heralded as scientifically valid, and therefore beyond reproof from either side. Their views, however anachronistic, are elevated to a place of science and therefore sacredness, however paradoxical. While refuting the laurels of science, they rely upon it to authorize their beliefs and prejudices and thus assure their own survival. The limbo continues. The need for the Creation Museum grows.