Comments by Biden on "60 Minutes" are being spun as a definitive rebuke of Dowd. There's only one problem with that 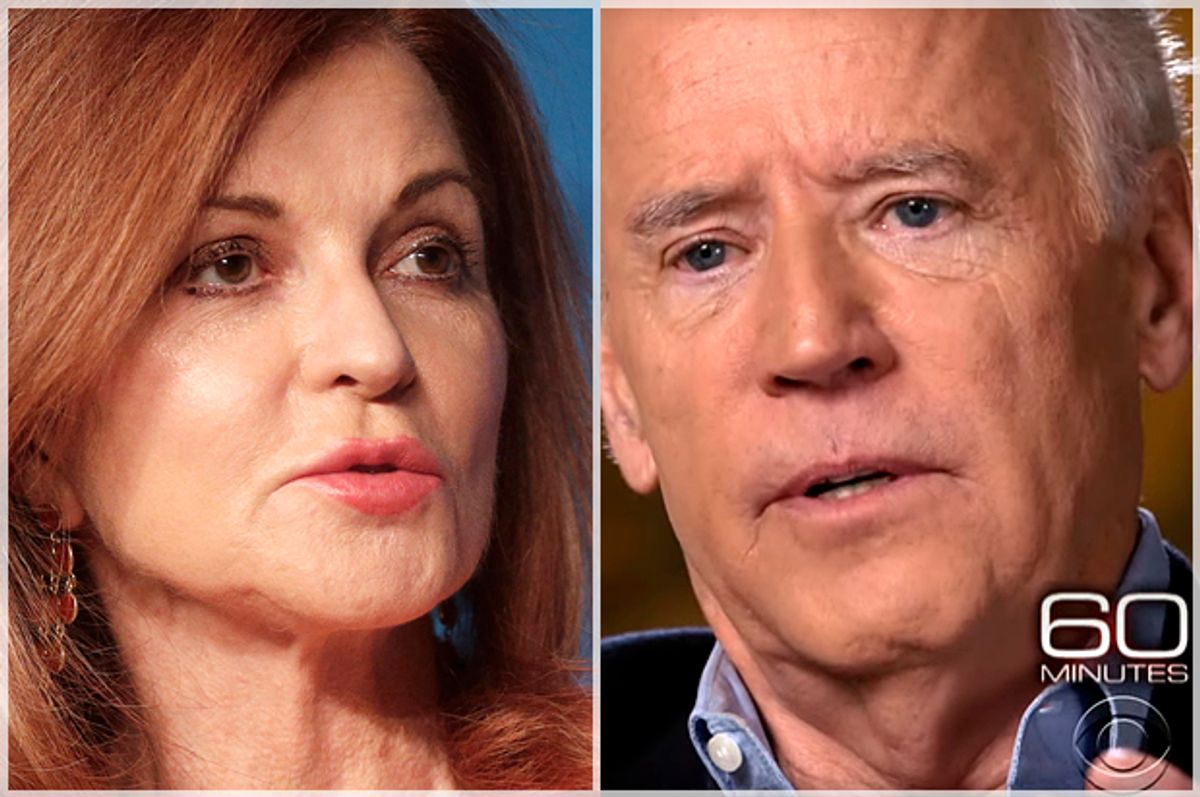 Joe Biden's appearance on Sunday's "60 Minutes" contained many things, including a further explanation of why he isn't running for president and new insights into how his family has coped with the death of his son Beau. But running through the segment was an open exasperation for the media circus that has surrounded his decision-making process. "What was driving us crazy is you guys," he told interviewer Norah O'Donnell.

Chief among Biden's frustrations was one particular, and well-trafficked, story. As he put it:

Some people have written that, you know, Beau on his deathbed said, "Dad, you've got to run," and, there was this sort of Hollywood moment that, you know, nothing like that ever, ever happened...There was not what was sort of made out as kind of this Hollywood-esque thing that at the last minute Beau grabbed my hand and said, "Dad, you've got to run, like, win one for the Gipper." It wasn't anything like that.

Biden didn't name any names, but it was crystal clear who he was talking about: New York Times columnist Maureen Dowd. Dowd's August 1st column contained just the kind of cinematic scene that he scoffed at on Sunday. She described an insistent Beau sitting Biden down and urging him to run:

Beau was losing his nouns and the right side of his face was partially paralyzed. But he had a mission: He tried to make his father promise to run, arguing that the White House should not revert to the Clintons and that the country would be better off with Biden values.

Such a richly detailed, emotional—and, we might add, totally unsourced—passage in the column of one of Washington's most famous Hillary-haters could not help but electrify the chattering class. So when Biden appeared to pour cold water on the story, the schadenfreude was instantaneous. Dowd—who by this point has long since become a parody of herself—is always a rich target, and it seemed like her critics had another transgression to add to their list. Headlines like "Joe Biden slaps down Maureen Dowd’s version of ‘Beau Biden’s dying wish’ story"  and "Maureen Dowd Is A Idiot, Says Joe Biden And Everyone Else" quickly popped up.

Before we re-crucify Dowd, though, we should step back for a second, because this story is rather more complicated than that.

For one (very big) thing, Biden himself has been identified as Dowd's source for the Beau tale. Earlier this month, Politico definitively pointed the finger at the vice president:

According to multiple sources, it was Biden himself who talked to [Dowd]...Before that moment and since, Biden has told the Beau story to others. Sometimes details change — the setting, the exact words. The version he gave Dowd delivered the strongest punch to the gut, making the clearest swipe at Clinton by enshrining the idea of a campaign against her in the words of a son so beloved nationally that his advice is now beyond politics. This campaign wouldn’t be about her or her email controversy, the story suggests, but connected to righteousness on some higher plane.

O'Donnell didn't ask Biden if he was also denying that he had been Dowd's source, and he didn't raise the issue. But if we are to completely believe him, we have to believe that not only was Dowd handed a pile of very finely detailed fiction, but that Politico was then also handed another pile of fiction when it followed up on the story. Both could obviously be true—there have been a great many dubious sources swirling around Bidenworld lately—but it's also quite possible that the story is firmer than Biden is letting on.

Moreover, Dowd's story never mentioned a "deathbed," or Beau Biden grabbing his father's arm, and Biden also acknowledged that his son had consistently told him that he should run, adding another layer of ambiguity to the situation. Perhaps Biden was reacting to the many stories that followed the Dowd column which all mentioned some version of a "dramatic deathbed exchange," in the words of the New York Daily News.

Ultimately, we are left with a lot of haziness—mostly because all of the sources involved are entirely anonymous. That might be the biggest irritant in this whole back-and-forth. If there's any lesson to be derived from it, it's that even if you're a columnist for the New York Times, you should still show your work.