Rand Paul is just this desperate: Why his pathetic lies about the safety net are so destructive 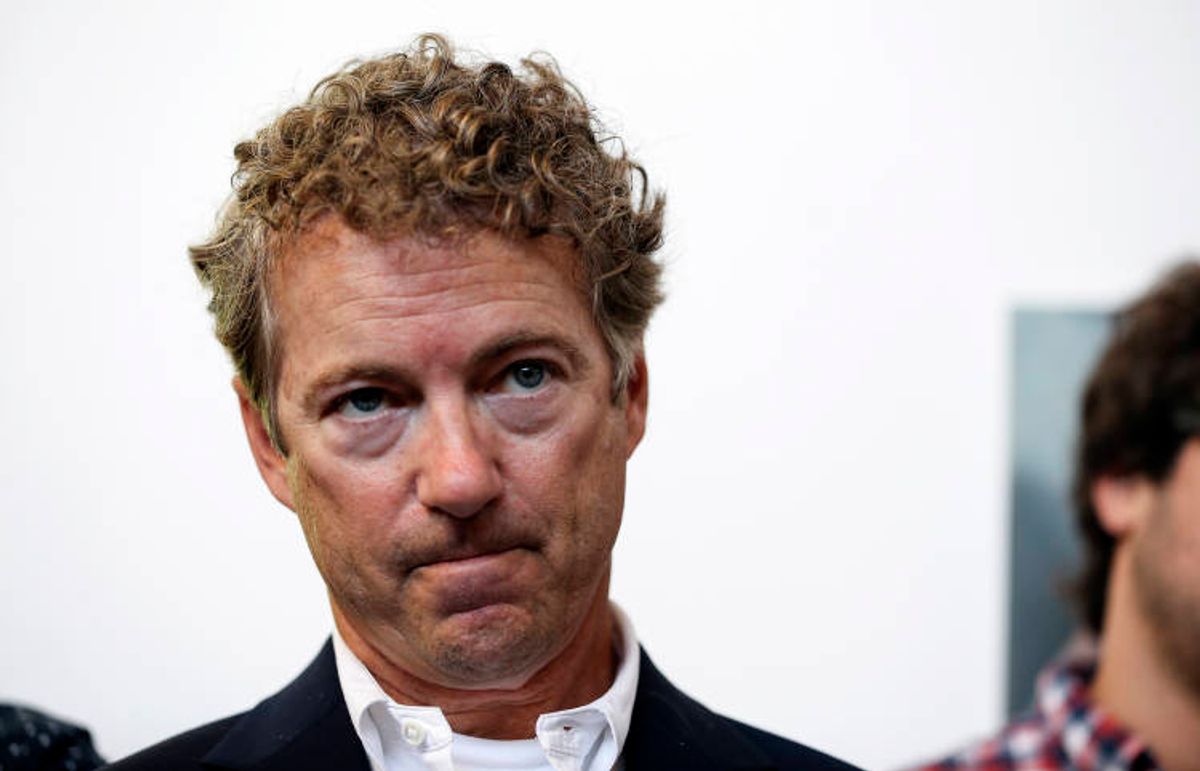 Over the past couple of weeks, as Sen. Rand Paul’s (R-KT) relevancy has continued to wane -- proving the GOP is not a very welcome party for libertarians after all -- the Kentucky Senator seems to have concluded that his best shot at making it into the news is to attack Sen. Bernie Sanders (I-VT), an outsider who is actually doing well, with comments that one would expect from a teenage malcontent who had just discovered Ayn Rand.

Paul proved just how myopic and ridiculous he is last week, when he linked Sanders to various Communist dictators of the 20th century, such as Stalin, Mao, and Pol-Pot. “I think it’s not an accident of history,” said Paul, “that most of the times when socialism has been tried that attendant with that has been mass genocide of people or any of those who object to it.”

On Friday, he shifted to another popular right wing talking point when it comes to “socialism,” and implied that it would make all of our young people spoiled brats who expect the government to give them "free stuff." (Right-wingers can’t seem to make up their mind on whether democratic socialism makes everyone lazy or leads to brutal totalitarianism.) When asked about the increasing college tuitions in America, which are leaving young people with tens of thousands or more in debt, Paul asked Fusion's Katie McDonough a hypothetical question: What would happen after college tuition became free, as Sanders advocates? Paul predicted that everyone would suddenly want everything to be free. “What about free clothes?” he asked, “Free makeup, free shoes? Everything should be free. But it can’t be free, somebody has to pay for it.”

It is nonsense, of course. Making certain crucial services like healthcare and education “free,” or at the very least affordable, would only lead to these kind of outcomes in an Ayn Rand novel. Higher education is not only critical for the future careers of young Americans and the countries economic productivity, but for democracy itself. Without an educated and well informed populace, democracy is at risk, and demagogues like Donald Trump (whose supporters tend to be undereducated) can easily hijack the political system, which Rand Paul surely does not want to happen.

In a recent article for the Washington Post, Sanders explains how a college degree has become the new high school diploma, and why making public colleges tuition-free is not about “free stuff,” but investing in America’s future:

“In the 1950s and 1960s, it was possible to graduate from high school and move right into a decent-paying job with good benefits. Strong unions offered apprenticeships, and a large manufacturing sector provided opportunities for those without an advanced degree. A couple with a sole breadwinner could buy a home, raise a family and send their kids to college. That was the American dream. Unfortunately, today, for too many Americans, it’s not a possibility... An important pathway to the middle class now runs through higher education, but rising costs are making it harder and harder for ordinary Americans to get the education they want and need.”

In a democratic society, education should not be a privilege, but a right. Any young person with the capability and desire to go to college should not have to worry about whether they can afford to go. Today, a child who is born in the poorest income quintile is most likely (30 percent) to stay in that bottom quintile if they receive a HS diploma, but with a college degree, they are most likely to make it to the middle quintile (26 percent), and more likely to make it to the top (20 percent) than to stay in the bottom (16 percent). In other words, higher education is crucial for social mobility. And yet, family income levels also determine the likelihood of a young person attending college. In 2012, high school graduates that came from low income families were 51 percent likely to enroll in a 2 or 4 year college, while those from high income families were 81 percent likely. Social mobility has always been something the United States has prided itself on, but America is less mobile than most industrialized nations, where one’s economic upbringing is less determinant for his or her future.

“In my view, education is essential for personal and national well-being,” Sanders continues in his editorial, “We live in a highly competitive, global economy, and if our economy is to be strong, we need the best-educated workforce in the world. We won’t achieve that if, every year, hundreds of thousands of bright young people cannot afford to go to college while millions more leave school deeply in debt.”

After concluding that tuition-free public colleges would make everyone want free stuff, Paul said that his answer to rising tuition costs would be distance learning, which shows that he is not very serious about this issue. But he is right about something. Nothing is free, and in this case, Sanders’ plan would be paid for with a financial transaction tax, which is a minuscule excise tax on trades of stocks, bonds, and other securities. This tax is found in most industrialized countries, and is generally a fraction of a percent (typically a few hundredths of a percent). This adds up, but it is barely noticeable on individual trades. As Jared Bernstein writes in the New York Times:

Besides increasing revenue from wealthy speculators (Tax Policy Center estimates a meager 0.01 rate would raise $185 billion in 10 years), a financial transaction tax would also curtail trading volume the higher the rate, and “reduce excessive liquidity.” (Clinton has also proposed a “targeted” tax on high frequency trading on cancelled orders, but this plan would not raise much money.)

This one issue shows a fundamental difference between modern Democrats and Republicans. When it comes to opportunity and social mobility in America, Republicans think we are at an ideal level. But the data tell a different story. Economic inequality is at levels unseen since the Great Depression, and the American dream isn’t what it used to be (even if it has always been somewhat of a myth). Senator Paul's campaign slogan is "Defeat the Washington machine, Unleash the American Dream," yet like other Republicans, his policies are detrimental to the middle class and the millions who are not born into privilege.