Weezer is the absolute worst: Is Rivers Cuomo just trolling us all?

Weezer's new single is hilariously bad, continuing a wretched streak so hideous that it almost must be intentional 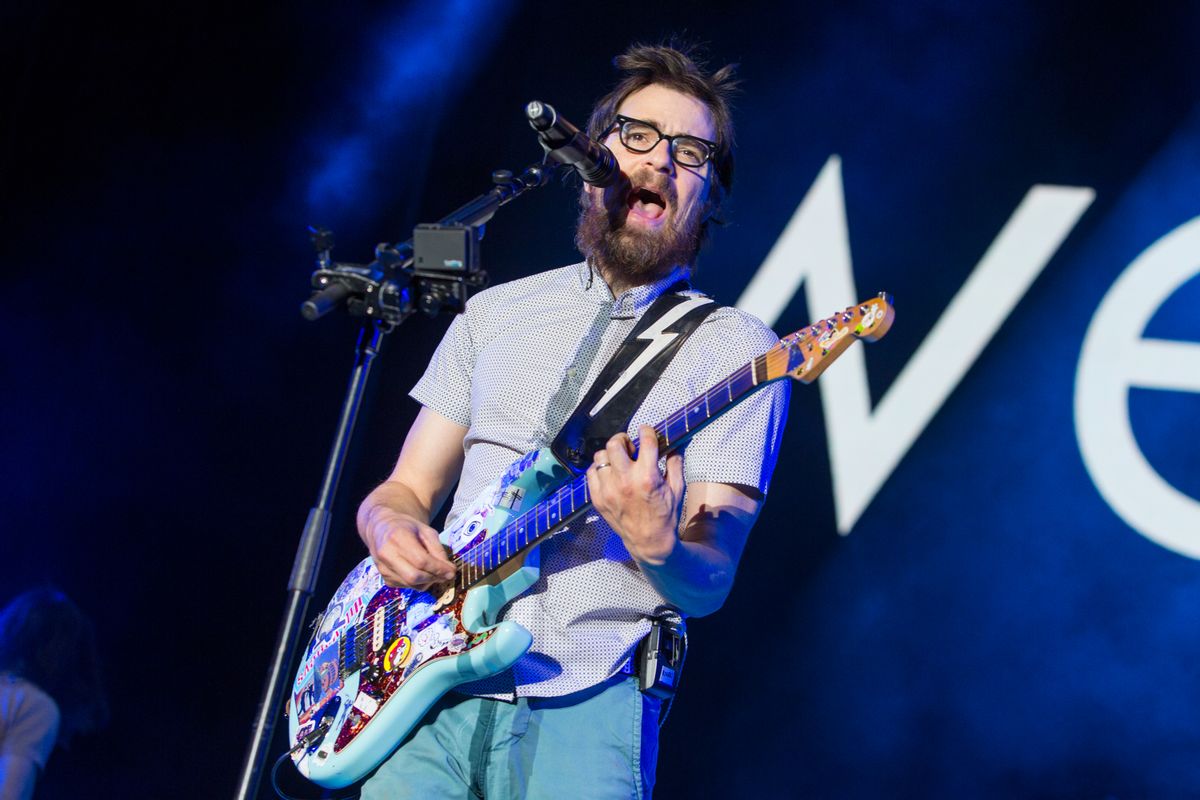 Rivers Cuomo of Weezer performs during the Life is Beautiful festival in Las Vegas. (Paul A. Hebert/invision/ap)
--

Man, Weezer’s new single sure is weird. It’s called “Thank God for Girls,” and that last word standing out like a dare to thinkpiece writers everywhere. The cover features a photo of the Pope, because people on the Internet sure do like the Pope. The first verse is about a woman—I’m sorry, a girl -- who works at a pastry shop and makes cannolis that may or may not be sexual innuendos. “She’s so energetic in her sweaty overalls,” Rivers Cuomo sings, obviously describing a real person. Later, he raps—yes, he raps—about how he gives this girl sweaty palms and how God created Eve by throwing Adam’s rib into a centrifuge. Meanwhile, the band shout the title in distorted voices, as though singing through telephones, and the guitars crunch and wail in a parody of guitars that crunch and wail.

“Thank God for Girls” is the worst kind of weird. It’s weird for the sake of weird. Calculated non sequitur. Scripted strangeness. The song could have been created in a lab; it’s genetically engineered to go viral because cannolis and sweaty overalls, right? And it probably will go viral. In fact, right now people are posting that self-consciously zany video to their social medias, even though the song itself is a non-song that touches on enough hot topics—gender equality, dragons, Creationism, pastries—to sound like it might actually be saying something about something. But “Thank God for Girls” isn’t subversive or substantial or anything at all. Worst of all, it’s not even fun.

This is not a new thing. Weezer practically invented that sad new format called meme rock with their 2008 video for “Pork n Beans,” which featured the Numa Numa guy, the Leave Britney Alone guy, the Evolution of Dance guy, the Chocolate Rain guy, and Dramatic Hamster. Ostensibly Cuomo was praising the unpolished idiosyncrasies of these unlikely celebrities as a way to tell his own fans that hey, it’s okay to be weird. Just be yourself. It’s a nice message, very empowering and very Ben Folds, but “Pork n Beans” was never actually about you and me. No, Weezer are singing about themselves and how weird and wacky and lovable they are. Rather than celebratory, it comes across as cynical.

Even when their '90s alt-pop peers have resigned themselves to nostalgia tours and/or complete obscurity, Weezer are still going strong, at least as actual rock bands go. They still release event albums, still sell well enough in their first week, still fall off in their second, still tour large venues, still play shows under that ironic winged W. But their popularity, aside from their pandering antics, isn’t based on listeners’ nostalgia for a time when rock bands actually commanded attention and sales. Instead, they’re coasting on the good will of their first two albums: 1994’s charmingly eccentric “Weezer” (known far and wide as the Blue Album) and 1996’s disarmingly confessional “Pinkerton” (known far and wide as the album that rips your soul out).

To be fair, Weezer were great when they were underdogs. Two decades ago, they mixed semi-heavy riffs with witty lyrics and trenchant self-loathing, and even at a time when rock-and-roll exorcisms were all over the radio dial, Cuomo dispensed messy emotions via precisely structured pop songs. The success of early singles like “Undone (The Sweater Song)” and “Buddy Holly” nearly trashed their underdog status, but Pinkerton, so misunderstood in its time, immediately sent them back into semi-obscurity. It tanked, of course, but at least Cuomo owned up to some of the uglier aspects of relationships. His less-than-glowing self-assessment was refreshing during a decade when well-meaning but—let’s face it, dumb—bands toyed around with knowingly misogynist perspectives and got way in over their heads. Think “Sex Type Thing” by Stone Temple Pilots or “Push” by Matchbox 20. Weezer could get away with a song like “No One Else” or “El Scorcho” because Cuomo delivered each line with an implied “sorry.”

The resurrection of Pinkerton from sophomore slump to generational milestone is still a pretty remarkable story, even if the band had to shed its underdog status once and for all. Their 2001 comeback, “Weezer” (aka Green Album), was slammed for being impersonal and overproduced, which may have been the entire point. In retrospect, it sounds like a retreat from the emotional kneecapping of the would-be career wrecker, but at least it had “Island in the Sun,” as wistful and as dreamy a tune as Cuomo has ever penned.

He played the part of the rock-and-roll loser beautifully on those first two albums, but since then, Cuomo has never been especially convincing as a rock star, perhaps because the role was thrust upon him and accepted only reluctantly. That predicament alone could fuel a thoughtful and provocative album, perhaps even a long and productive career, but Weezer’s output in the twenty-first century has been so consistently, aggressively, inventively awful that it’s almost impressive. Their last six albums—starting with 2002’s “Maladroit”—have been almost comically bad, each sporting some variation of the same slick, expensive-sounding sonic palette and some of the most moon/June rhymes imaginable. Cuomo apparently forgot how to put songs together and the band forgot how to rock without quotation marks. “Beverly Hills” and “Dope Nose” and “I’m Your Daddy” weren’t just bad. Those singles sound like someone put real effort into their badness.

So the best part of last year’s “Everything Will Be Alright in the End” was that it sounded like the end: the culmination of more than a decade of wrongheaded tendencies, boneheaded lyrics, and half-assed gambits. It sounded, in other words, like the final Weezer album, one last attempt to set things right before they finally put the band out of our misery. Cuomo directed most of the songs to his fans, as though feinting toward an apology: “Back to the Shack” was an attempt to hit the reset button and start all over again, while “Eulogy for a Rock Band” served as an epitaph after “fifteen years of ruling the planet.” It almost sounded like a mea culpa, but “I’ve Had It Up to Here” suggested otherwise: “If you think I need approval from the faceless throng,” Cuomo sang, unbowed and unbroken and unbelievable, “well, that’s where you’re wrong.” Weirdly, the album received glowing reviews.

So the band keeps going. “Thank God for Girls” no doubt heralds a tenth album and possibly the extinguishing of the sun. As the highs of the 1990s recede further and further into the dark past, one thing does grow clearer and clearer. Weezer haven’t been flailing about these past fifteen years, searching in vain for some direction and inspiration. At a certain point, they must have decided to become the worst band in the world. Forget meme rock. They’re troll rock.