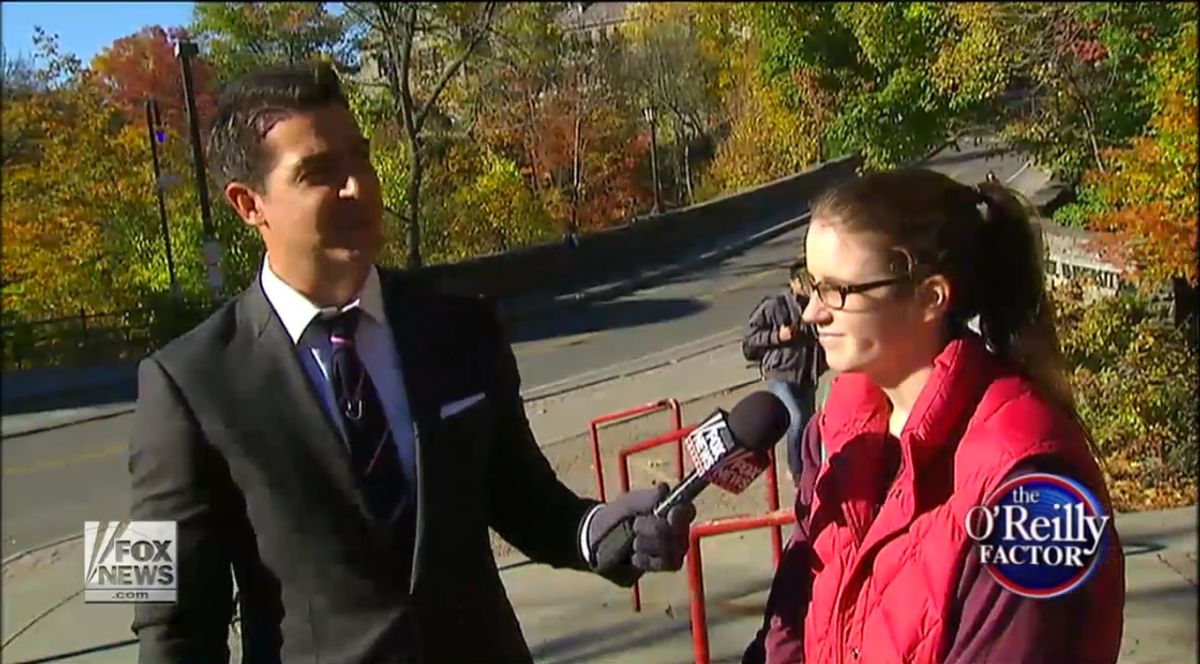 As Scott Kaufman details for Salon, The O'Reilly Factor had a "comedy" segment this week devoted to pressing Fox News viewers' buttons about the liberal elite and the supposedly spoiled, ungrateful Ivy League-attending youth of today. The point of the segment was just to shovel red meat at the audience, but there was a brief moment that also, purely by accident, demonstrated why it's so wrong to write off sexual harassment as just "compliments."

At one point in the segment, Watters interviews a young Cornell student who eats his lunch, sarcastically joking about how she's "indoctrinated" and just generally seeming onto his game. Being bested by a young woman clearly gets to Watters, because he reacts to this by disingenuously hitting on her, as described by Kaufman:

Watters later asked that student if he could buy her a “Make America Great” hat, and she replied, “you can’t buy me anything.”

“OK, this got weird,” she replied, walking away from the old man with a plastic smile as he ejected laughter through the warm hole in his face.

One of the most typical ways that sexual harassers and their apologists minimize harassment is by claiming that it's just flirtation and it's meant as a compliment. This claim often gets traction because a lot of harassment is bundled up in compliment form. Issuing fake compliments to women has a double purpose. It gives the harasser plausible deniability. It also puts the targets in a bad spot. If you complain about, say, a man following you down the street and saying, "You're so beautiful," you sound like you're bragging, even if, in reality, it creeped you out. So women often elect to stay silent, which perpetuates the sense that men can harass women without having to be held accountable for it.

But if you watch this video, it's a really good example of how these so-called compliments are actually veiled insults or, in some cases, threats. On its surface, asking someone out to dinner is a nice gesture, a compliment. But clearly, that is not Watters intention. No, it's clear from context that he doesn't really want to go to dinner with this woman. Asking her out is just a way to put her in her place. She outsmarted him, so in retaliation, he's going to insinuate that he only sees her as a sex object. The message is clear: I only see that you're a cute young thing and your silly opinions are so irrelevant they won't even stop me from trying to hit that.

It's a weaponized compliment, and quite a bit of sexual harassment is like that: Telling women they are beautiful to insinuate that beautiful is all they are, using the fact that you find them attractive to suggest they have no other value, and, in many cases, hitting on women you know for a fact will say no precisely to make them uncomfortable. The pose of the compliment is disingenuous, and the target hears the insult lurking underneath loud and clear.

So thanks for that, Jesse Watters. You were so eager to humiliate this young woman on air that you helped illustrate to the skeptics why they should believe women when they say that certain "compliments" are actually just harassment.