Rachel Maddow confronts Bernie Sanders over past opposition to marriage equality: How are you any different than Hillary Clinton? 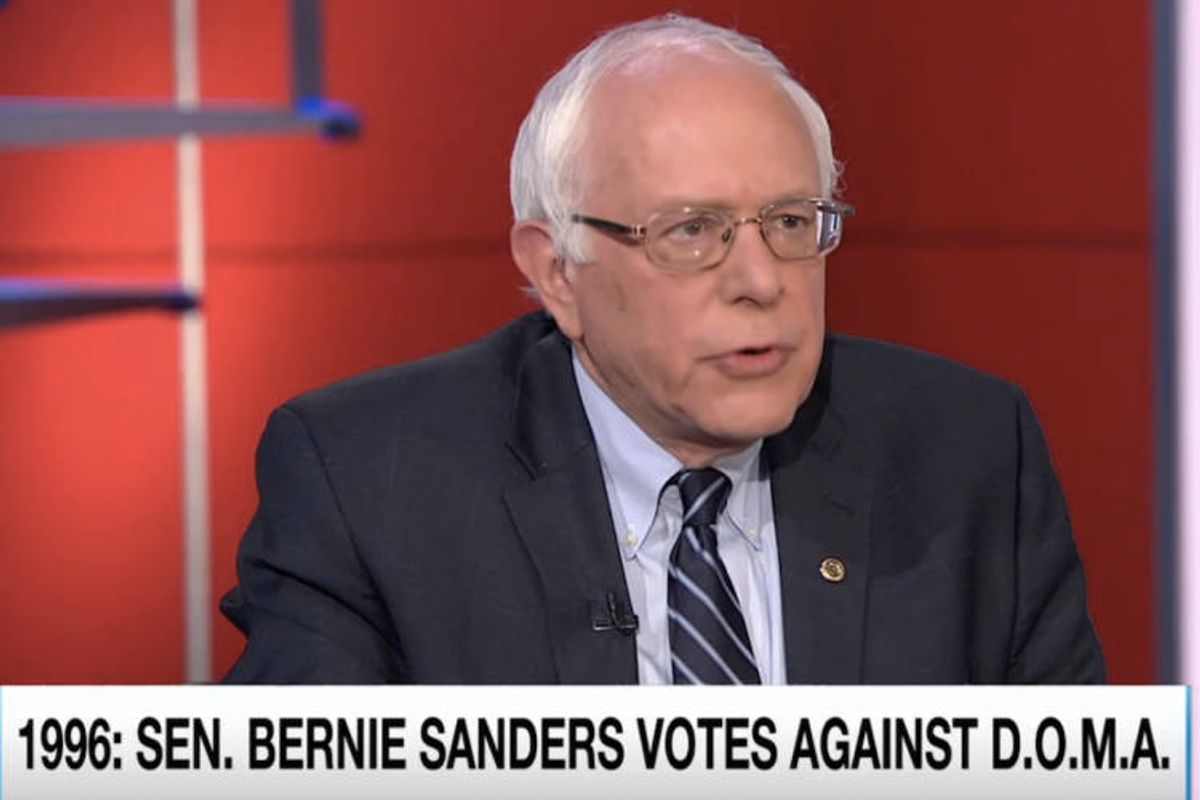 Bernie Sanders wanted to reiterate his latest attack on Democratic presidential rival Hillary Clinton's revisionist defense of the Defense of Marriage Act (DOMA) signed by her husband in 1996, but on Monday night's edition of MSNBC's "Rachel Maddow Show," he ended up having to defend his own opposition to same-sex marriage in his home state 10 years after President Clinton signed the anti-gay law.

The Democrats' brewing same-sex marriage fight boils down to one question: Is political pragmatism enough of a defense for previously-held anti-LGBT positions?

On Friday, Maddow asked frontrunner Hillary Clinton about her thoughts on the fact that many of the civil rights accomplishments of the Obama era were actually reversals of policies implemented during her husband's time in office, pointing to DOMA, DADT and tough-on-crime reforms.

The case of DOMA, Clinton replied, was actually a “defensive action” meant to fend off “something worse" like a constitutional amendment banning same-sex marriage.

At Saturday's Iowa Democratic Party Jefferson-Jackson dinner, Sanders, who voted against the 1996 bill as a member of the House, blasted Clinton for "trying to rewrite history."

“Now today, some are trying to rewrite history by saying that they voted for one anti-gay law to stop something worse. That is not the case," Sanders told the gathered Democrats only a day after Clinton spoke with Maddow.

On Monday, Sanders also paid a visit to Maddow's MSNBC studio to sit for his own interview and, again, correct the record on DOMA.

Even though there is no issue now, no difference now, between them in terms of what policies they support now, there is a difference between them as candidates, as to whether or not President Bill Clinton signing that antigay law, whether that was an antigay and lamentable mistake that never should have happened, or whether — as Secretary Clinton argued here on Friday night — it was actually a well meaning effort, a well meaning effort to head off a greater harm that would have been done had President Bill Clinton not signed that discriminatory bill.

"It bothered me to hear Secretary Clinton saying, well, you know, DOMA, what it really was about was to prevent something even worse," Sanders told Maddow. "That just wasn't true. It wasn't true," he insisted, pointing to gay activists who have endorsed Clinton but have defended Sanders' account of the political climate at the time.

He continued: "There were a lot of decent people who in their hearts wanted to vote no and voted yes for political reasons. I didn't."

"Exactly why you think it's important that you were right first," Maddow asked Sanders, pushing him to distinguish himself from his rivals.

Maddow then pressed Sanders on his refusal to back Vermont's move to legalize same-sex marriage while running for Senate in 2006.

"My view was, give us a little bit of time," Sanders explained, pointing to political contention among the electorate.