White America will ignore this video: The hideous & predictable violence of our schools, our legal system, our society 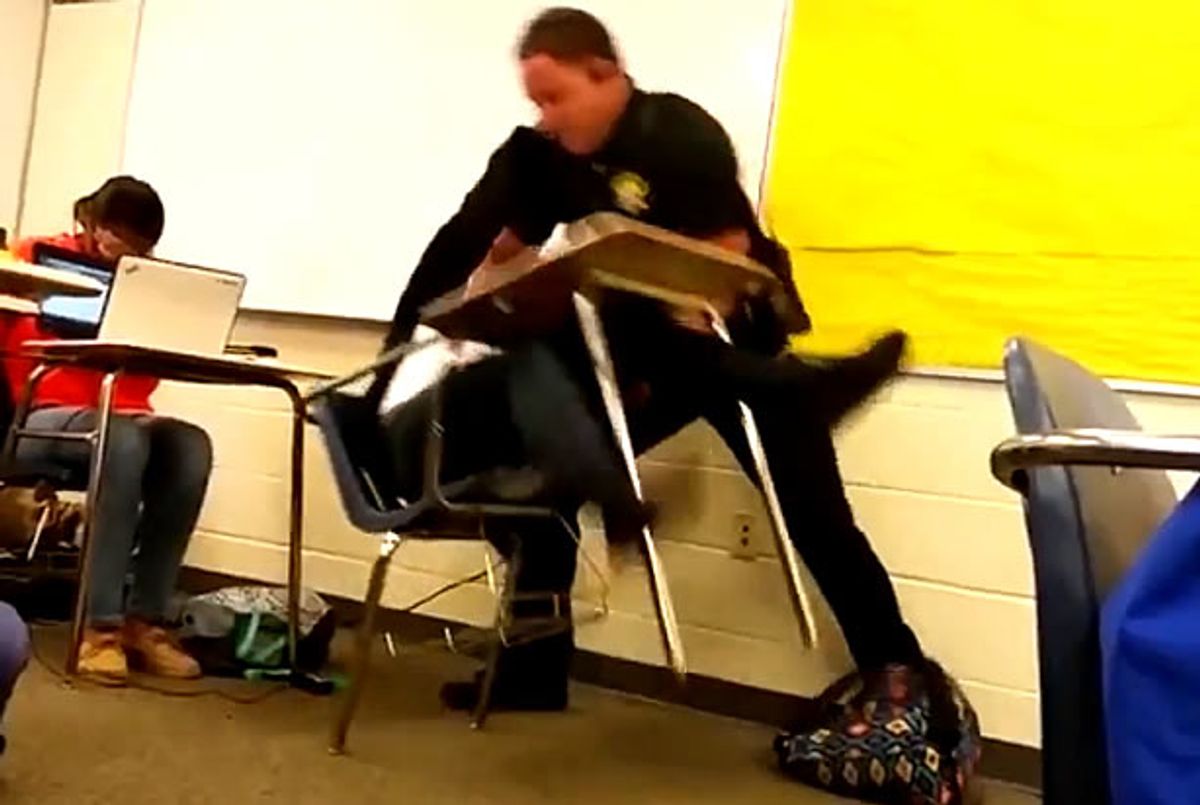 Much has already been made of this hideous footage, but it's worth breaking down exactly what the video shows us: Fields -- who, unsurprisingly,has a history of "alleged misconduct and racial bias" -- grabs the student by the neck and flips her desk over backwards, before whipping her around by the shirt and throwing her across the room.The teacher does not intervene to protect the student. Nor do her peers in the classroom, who seem to be frozen in place. Throughout the episode, the student barely moves.

If Fields treated a dog in such a manner he would likely be arrested for animal cruelty on the spot. And yet, while he appears to now be on disciplinary leave, pending the results of a police investigation, he remains a free man. All of it begs the question: Would Fields have faced any consequences at all, had the incident not been recorded on video?

Such violence is not surprising in an era when assaults on the black and brown bodies by police are common. Given the ubiquity of surveillance technology, the lack of photographic or videotaped evidence of these kinds of state-sanctioned attacks can no longer be summoned as a defense of white American ignorance about the lived experiences of people of color.

In the age of Eric Garner, Trayvon Martin, Samuel Dubose, Michael Brown, Walter Scott, Sandra Bland, Rekia Boyd, and so many others, to deny such facts is an act of willful evasion, and thus complicity with white supremacy.

The now-trending Twitter hashtag “#AssaultAtSpringValleyHigh” video will be the outrage of the day for a media establishment where, “if it bleeds, it leads.” Yet, momentary outrage does little if anything to redress and correct the types of structural racial and class inequality that enable the brutal treatment -- by an officer of the state -- of a vulnerable black child who has done nothing to provoke such a vicious assault.

Outrage and disgust are a reasonable response to the “Assault at Spring Valley High” video. To make sense of it, social scientists and other experts can summon concepts such as implicit bias, how white people tend to see black and brown children as adults, much older than their actual years. They can point to the ways white Americans practice excuse-making for a racist criminal justice system. Researchers have documented that police are much quicker to kill unarmed black people than they are members of other groups. These are empirical frameworks and tools for making sense of quotidian white supremacy, as enacted on and against blacks and other people of color. To that end, such work is invaluable.

The video from Spring Valley High can be understood by all those perspectives. But first and foremost, that horrific video is a lesson in the relationship between race and citizenship.

Citizenship is primarily embodied by how an individual or group is treated by the State. Citizenship is therefore a condition of belonging, safety, security, and investment in and by the government and the broader political community. African-Americans have historically -- from slavery through to Jim and Jane Crow -- been treated as anti-citizens, a semi-permanent Other, and outside of what is means to be a “real American” (i.e. white and male). This continues even in the post-civil rights era and the Age of Obama. “Colorblind” racial discourse has come into being to provide a new language to articulate that centuries-old fact.

Ultimately, blackness is the flip side and antithesis of what it means to be “free, white, and 21” in the United States and elsewhere. As the late Joel Olson brilliantly argued, black people are anti-citizens, the basement group below which no white folks, as individuals or as a group, can fall in America’s racial hierarchy.

(The citizenship and belonging of black Americans in the country’s polity is so insecure and contingent that it had to be explicitly outlined and protected in the United States Constitution, as well as subsequent civil and voting rights laws.)

The possessive investment in whiteness is both psychological and material. Knowing that one can never be stigmatized as “black” in such a manner that it detracts from their long-term life chances is one of the greatest luxuries and privileges of Whiteness.

(Norman Mailer famously described those folks who play with “blackness” as “white Negroes”; white racial and cultural tourism still exists, it now hides behind the cloak of “diversity” and “multiculturalism”.)

Schools are one of the primary means through which citizens are socialized into their identities and sense of belonging in a society. The schools that black and brown children attend are under-resourced, poorly equipped, and highly policed as compared to those in white (middle and upper class) neighborhoods.

Schools such as those featured in the “#AssaultAtSpringValleyHigh” video are an integral part of “the school to prison pipeline.” America is a carceral society whose prisons are neoliberal profit generating industries. Black and brown people—and poor whites too—are the inputs. Wealth and profit are extracted from their bodies. Schools in this system discriminate against and disproportionately punish black students, and treat children not as young learners, but as future inmates.

The type of unequal and imperiled citizenship shown in a white cop’s brutal treatment of a black child in South Carolina is also a reminder of how such disparities and violence are justified.

White supremacist thinking will twist the events in the video such that the young black girl in the video somehow “provoked” the violence she suffered. The White Gaze will see a young black girl and imagine her as an adult, a criminal, a threat to a large white adult who is armed with guns, batons, tasers, pepper spray, and likely is wearing body armor.

The knee-jerk defense of cops who kill and brutalize people of color will default to a tired and lazy script that reads, for every instance of police brutality, that “cops have a hard job.” In this Orwellian and almost Stalin-esque, maddening and morally debased schema, police brutality is the price for “our” safety and security. Of course, those who endorse such authoritarian brutality are not living in the communities where their constitutional rights are routinely violated by “stop and frisk,” or alternatively subjected to the racist and classist imperatives of the new Jim Crow, America’s prison industrial complex.

Even before the brutality depicted in the “#AssaultAtSpringValleyHigh” video, the black and brown students stuck in America’s school to prison pipeline have already learned many life lessons about citizenship: They are not valued. Their lives are expendable. They live in highly class-based and racially segregated communities. America’s culture of cruelty, austerity, white supremacy, and violence has already marked them as “less than” when compared to white people.

The black teenager assaulted at Spring Valley High byBen Fields (and her peers who witnessed the violation) are living in an existential state of insecurity and vulnerability, a place where they are subjected to random violence. This is philosopher Cornel West’s description of “niggerization.” Unfortunately, millions of America’s black and brown children experience that type of malaise, and accompanying state of physical and emotional assault on a near daily basis in the country’s schools.

America does not care about its children. This is true on both sides of the color line—it is only the degree of magnitude and the resulting examples that differ. It does not love its white children, who are killed by guns in their schools by mass shooters. Nothing is done to stop the plague of gun violence. America has even less love for its black children. It worships Thomas Jefferson as a “founding father,” even though he was a child rapist who savaged a young black girl named Sally Hemmings. It engineered slavery and Jim and Jane Crow, defended them both until the bitter end. It defends now a school system that shuttles black and brown children into the maw of America’s prisons and jails while lying about giving them a proper “education.”

President Abraham Lincoln offered the brilliant insight that "the philosophy of the school room in one generation will be the philosophy of government in the next." Lincoln’s wisdom should give all people of conscience great pause and concern. The lessons that America’s young people are learning in the school-to-prison pipeline do not bode well for the future of the country.